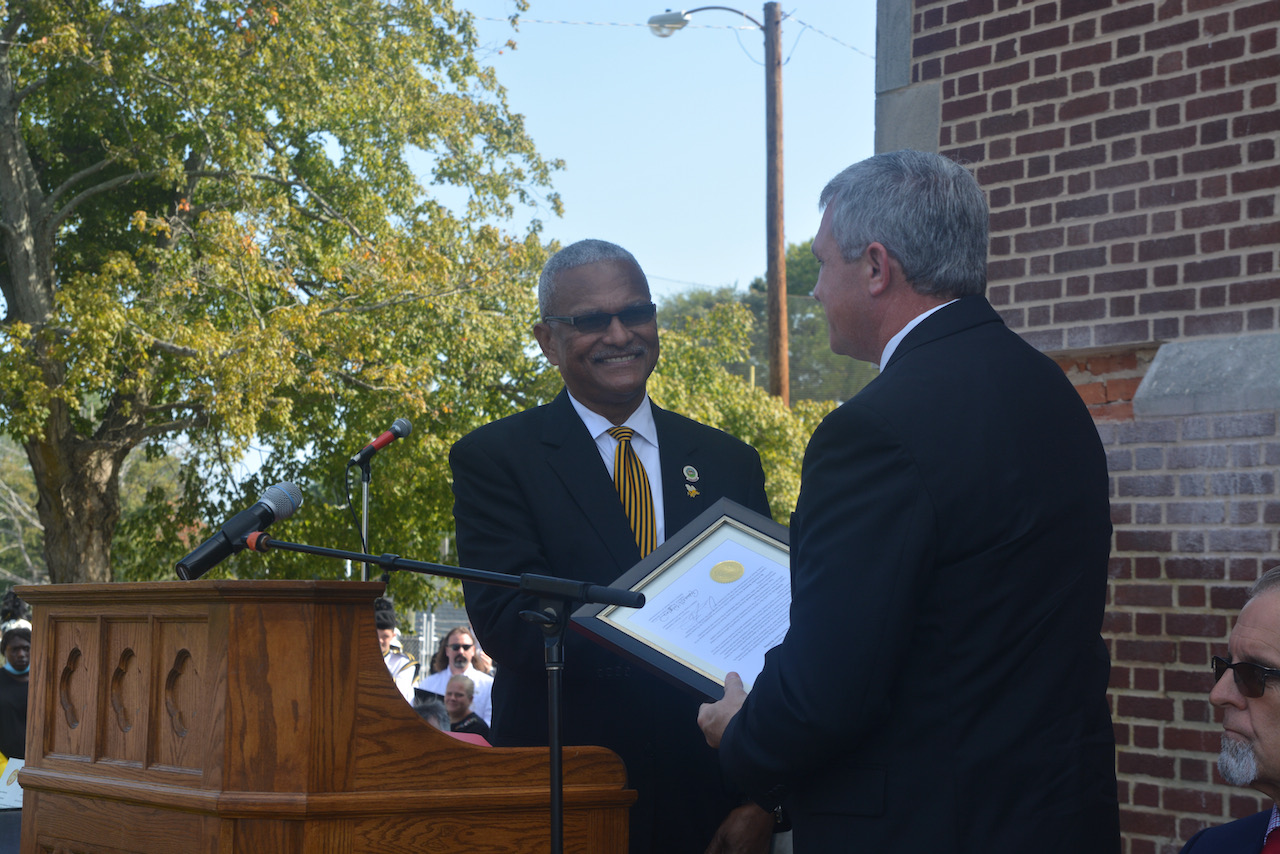 Speakers honor past, present, and future of historic high school

Bradley said noted architect Hobart Upjohn not only designed the high school, but gave North Carolina an extraordinary number of churches and other educational buildings — nearly 50 in all. “It’s been said that well-designed school buildings contribute to the success of students who attend. This building was designed with this purpose in mind.”

The lions and the owls, Bradley said, to this day remain fixtures on the building and serve as reminders of the power of education as students go from class to class. “I’m proud to be a student here and proud of the many people who came before me to do great things in the community and around the world.”

Said Bradley: “With the help of my teachers, my family and the community my goal is to carry on the legacy.”

Carlisle said while classrooms might look different today, outfitted with 21st century technology, “The purpose remains the same — making sure the children of Roanoke Rapids have access to a high quality education.”

With a commitment to education and a passion for education in mind, Carlisle said, “Our faculty and staff continue to reach new levels of distinction every day. With the support of the community, stakeholders and families who entrust us with their students I speak for the entire board of trustees when I say that I’m proud of Roanoke Rapids High School and the entire Roanoke Rapids Graded School District and the accomplishments and many advances we have made since and continue to make for our community and students.”

Roanoke Rapids Mayor Emery Doughtie said, “Today is truly a once in a lifetime opportunity for me and my family. For all of us here today, this is obviously our first 100-year celebration and more than likely it will probably be our last. It’s a great event for our city.”

The mayor said one of his goals as an elected official is to continue working together with the school district to strengthen partnerships. “The results of that have been us working together as shown at the Manning track, the tennis courts that have been recently renovated at T.J. Davis Recreation Center, the joint use of the Kirkwood Adams building and also the aquatic center.”

A 1975 graduate, Doughtie said, “I can feel confident that I did receive a quality education from this high school. I’m also confident that if I had worked harder and applied myself better the quality would have definitely been significantly higher.”

Doughtie said, however, “I had teachers that made a big difference in the final product of my time here in Roanoke Rapids.”

In his senior high grades, Doughtie said two teachers stood out in helping him overcome his fear of math. “By going on to North Carolina State and graduating almost on time, I had satisfied two people — myself and my mother. She always instilled in my sister and me that to get that diploma, no one could take that away from you. We might not ever use it but we would always have it and be able to fall back on having that quality education.”

While some things have changed since his days in school such as a long-gone smoking area, Doughtie said some things haven’t, including Sam Patterson’s vision. “When Mr. Sam Patterson had the idea, he saw a great need to invest in a quality education institution of higher learning in this small town in Eastern North Carolina.”

In two to three years, Patterson raised $500,000, the mayor said, 10 times what a normal high school cost then. “We owe a great debt of gratitude to those who have served as the trustees of this great institution over the last hundred years as well as all the staff and anyone else who has been involved with our students here. They have had a tremendous impact.”

Said Doughtie: “The assurance that a first rate facility along with highly qualified staff to interact with these students make our school one that continues to produce graduates that are ready to leave this school, move forward to become productive members in our society wherever life’s journeys may take them.”

Halifax County Board of Commissioners Chairman Vernon Bryant told the audience, “Roanoke Rapids High School is the fulfillment of the dream and symbol of hope for the future of industrialist Samuel Patterson and continues to stand a century later as the centerpiece and most notable structure in the city of Roanoke Rapids.”

With a castle-like design by Upjohn, the cost of structure was quite significant, Bryant said, and placed “a great investment on this educational building. That investment was a sound one, as this elegant building still stands as a showpiece of architecture and hallmark of educational excellence today.”

A former Roanoke Rapids school board member of 13 years, five which were spent as chair, Bryant said, “Our board strove to provide every student with the opportunity to receive a sound, basic education, set high academic standards for student success, and establish standards for performance, safety, accountability and evaluation of school system operations.”

He said while the historic building is a valuable asset, “The academics, life skills, socialization, and community spirit that are shared within those walls are priceless.”

Bryant closed, saying, “As the lyrics to the school song state, let us continue to remain faithful and true-hearted to Roanoke Rapids High School. Let us revere and defend the value of quality and equitable education for all students as the keys to our community’s future prosperity.”

United States Senator Thom Tillis, who could not attend, sent an aide to the ceremony.

Trey Lewis read a statement from the Republican senator, which said, “Dear friends, I am pleased to send my best wishes to everyone gathered to celebrate 100 years of excellence in education at Roanoke Rapids High School … I would like to acknowledge the impact our schools and educators make on the lives of our young people and thank you for your unwavering commitment to North Carolina’s youth. The students of North Carolina are the future of our state and our nation. I applaud the work you are doing and I wish you all the best for a wonderful celebration.”

Lewis presented a flag which had been commissioned to fly over the capitol to RRHS principal Jeff White.

North Carolina State Representative Michael Wray, who on Wednesday read a resolution honoring the school from the House floor, also presented a state flag and plaque to White.

“It was an honor for us to stand there and say that we had a high school that is still operational a hundred years later,” Wray said. “I also spoke about the pride we have in our community and the pride from our alumni association in preserving this high school.”

Wray also spoke about the pride of graduation night, “When you can ride up and down the street here and you can see all the lights lit. It is very moving to see that.”

J. Wendell Hall, a member of the state board of education, spoke with Freebird McKinney, director of legislative and community affairs and Catherine Stickney, regional director for the Northeast Region of the state Department of Public Instruction, at his side.

Said Hall, “A hundred years is a long time. And 100 years ago, you had citizens in this county that thought and felt that each and every child should be appropriately educated and in a facility that would be equal to that education.”

Now, Hall said, “We have another hundred years to go to make sure that each and every child receives an appropriate and well-rounded education.”

Hall presented a plaque from the state board to mark the occasion.

Interim Superintendent Julie Thompson said, “Our new motto is ‘Together we succeed,’ and this event shows just that. Many people have put in countless hours of planning, hard work, and financial support to make this weekend a success in addition to preserving our wonderful high school building for another hundred years.”

Thompson said the hallways and grounds of the school have seen much change over the years. “Today we have over 14 languages spoken in our district. We have 21st century technology in the hands of every student from kindergarten through grade 12.”

She said the school system offers over 38 career and technical courses that serve more than 600 of the system’s students.

She also spoke of the dual enrollment program in which students can receive an associate’s degree through Halifax Community College.

“While we are celebrating our past today we are also looking forward to our future,” Thompson said. “We look forward to what the next years will bring for our school district and community. I can assure you that the Roanoke Rapids Graded School District will continue to be a catalyst for change and honor Mr. Sam Patterson’s legacy to instill the power of education.”

Thompson spoke of spending time with Captain William Robinson, a 1961 graduate of the school who was the longest interred prisoner of war in United States history, a man who was honored Friday night. “I’m inspired by his courage, humor and faith. Shortly after walking across the stage here at Roanoke Rapids High School with his class of 1961, Captain Robinson joined the United States Air Force to serve our country.”

When his helicopter went down over North Vietnam in 1965 he was captured. “Captain Robinson persevered through 2,703 days in captivity — seven and a half years making him the longest held enlisted POW in United States history,” Thompson said.

Thompson said Robinson told her to survive the ordeal he often thought about home “and the experiences he had right here at Roanoke Rapids High School. He thought about his classmates and his teammates — how they were a family. He thought about teachers and just not the lessons he learned in their classes or the games they won on that field but about how they cared about and loved him.”

Thompson said Robinson thought about Coach Hoyle “and how he was like another parent to him following the death of his mother. And he thought about other seemingly simple things such as riding his bike along Roanoke Avenue and playing on our football field.”

Graduates of the high school realize these are not simple things, Thompson said. “These are the really big things because they are the cornerstone of our childhood that keep us going when times are tough.”

Thompson what she found most profound about Robinson’s story was that while revered the school building, “His story was really about our community. It’s about our teachers, our teacher assistants, our staff members, our coaches, our bus drivers, our administrators, our students, our families and our whole community who together had a lasting impact on his life forever.”

While the school system and community celebrate the school turning 100, Thompson said, “We would be remiss if we did not also honor the many who have walked these halls, occupied its classrooms or served in whatever capacity was needed to make a lasting impact on the lives of our children. That’s what was, still is, and will always be the most important — our people.”