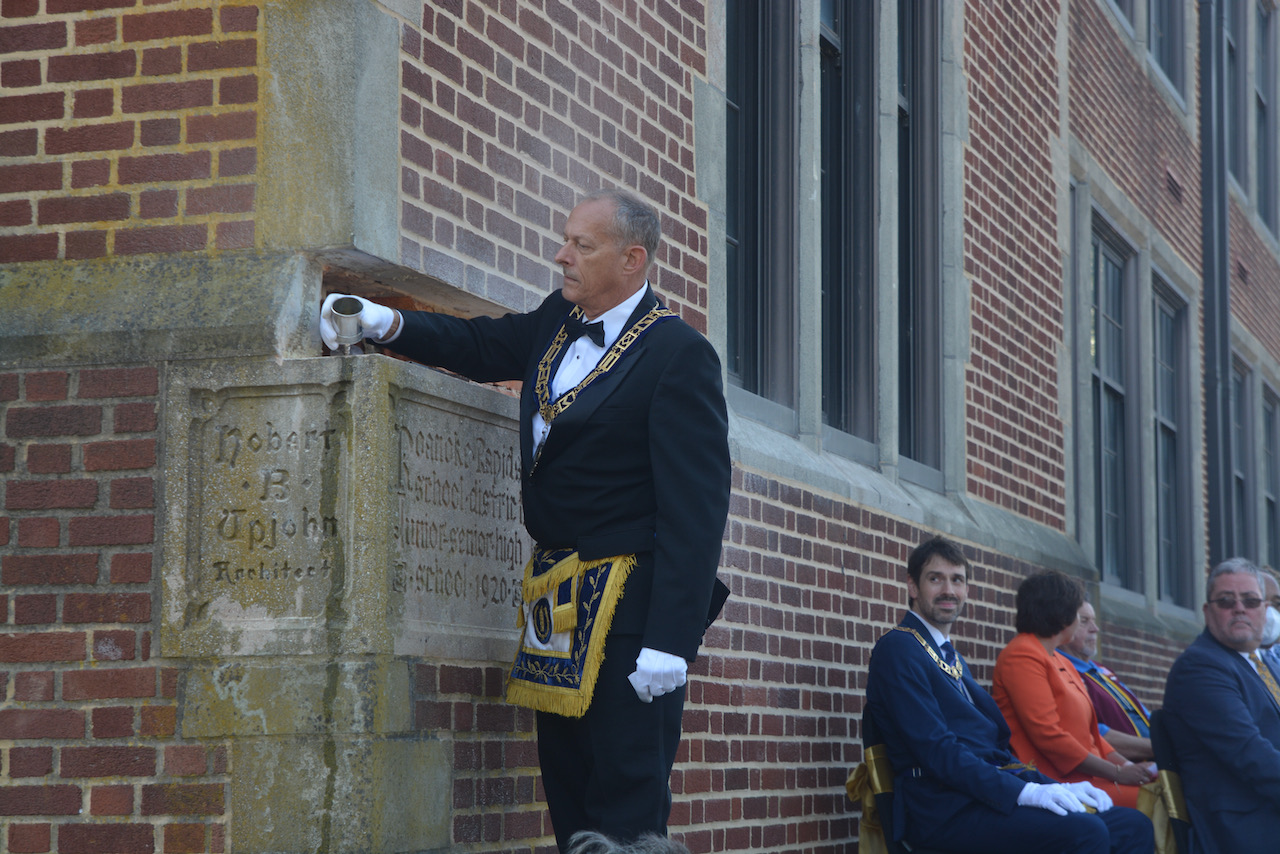 Fast forward to 2021 and one of the items placed in the new time capsule was an RRHS facemask signifying to future generations that the Roanoke Valley was still in the midst of the COVID-19 pandemic.

Other treasures retrieved from the original time capsule included a penny, a Bible and a Masonic code book, as Masons in 1921 oversaw the original cornerstone dedication and as they did during today’s rededication.

“What a great day for Roanoke Rapids High School and what a great day it is for this community,” principal Jeff White, a 1990 graduate, said in welcoming guests to the event.

(Related story at this link)

“One-hundred years ago Samuel Patterson saw the fulfillment of a dream,” White said. “His vision was to create a school that would be the symbolism of the power of education.”

Last year’s 100th class, the principal said, had something in common with the first graduating class. “Both classes lived during pandemics. As a result, masks, quarantines, lockdowns and school closures were familiar terms to the students 100 years ago as they are today.”

White said, however, “We have learned over the hundred years that challenges are inevitable but this school, this beautiful, historic old school continues to produce graduates who embody Sam Patterson’s dream — the power of education.”

David Wicker, grand master of the North Carolina Masonic Lodge, said, “It’s an honor to be here this morning to celebrate the rededication of this cornerstone and this high school after 100 years.”

Wicker said the ceremony the grand lodge conducted this morning was the same ceremony that was performed 100 years ago.

He said the high school represents “the ambitious desires of those who provide for themselves a more suitable high school for the education of the youth of Roanoke Rapids.”

During the masonic ceremony, masons confirmed the stone was in proper position.

The masons also confirmed the 1921 deposits into the original time capsule — a Holy Bible, a Masonic code book of the Grand Lodge of North Carolina of 1915, a copy of the Roanoke Rapids Herald of September 24, 1920, in which two of the headlines mentioned the original cornerstone laying as well the one noting the nationwide fight against the “Spanish flu” pandemic. There was also a copper penny from the year 1920.

The masons then confirmed the new deposit — an RRHS facemask, an invitation ticket to this year’s 100th commencement exercises in May, an RRHS keychain which says “striving for excellence,” a copy of a commemorative edition of the Roanoke Rapids Herald, a copy of the ceremony program, photographs, letters written for the occasion, a 2021 penny, a silver dollar from 1921 and a new silver dollar from 2021, a 2021 RRHS mug, a grand master pin, a masonic ceremony book, and pin commemorating the 250th anniversary of the founding of the provincial grand lodge.

The original Bible found in the 1921 time capsule was placed in the new capsule.

The masons used jewels of the craft to symbolize that the foundation stone was true — the plumb, square and level.

The elements of consecration — corn, wine and oil — were then presented and poured into the cornerstone.