City will have no one-stop site for March primary

There will be no one-stop voting site in Roanoke Rapids for the March primary, Halifax County Board of Elections Director Kristin Scott confirmed this morning.

Scott said in correspondence from the state board, which came in late Friday, she was informed while the county could amend its one-stop plan and allow a one-stop site, also called early voting, in the city, a unanimous decision would have to be made by the local board by this coming Friday.

She also said the state board informed her it was not holding further hearings on plans which were not unanimous.

An attempt by the county board last week to have Kirkwood Adams used as an early voting site instead of Halifax Community College passed on a 3-2 measure. The vote on the current one-stop was unanimous. 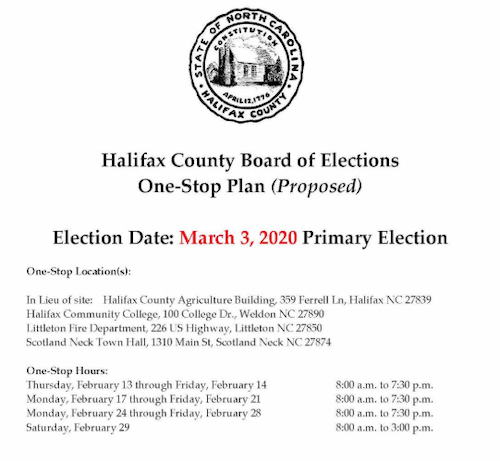 That plan would have to be in place by July 31.

Scott said she has informed the city of the state’s decision by email and sent a hard copy out in today’s mail.

City Councilman Wayne Smith, who along with Mayor Emery Doughtie, addressed the elections board last week about the city not having an early voting site, said this morning, “We’ll be back to the board of elections to try to get them to have one for November. We’re just going to have to do it. There’s no choice.”

Doughtie contended at last week’s county board meeting the city represents about 30 percent of the population of Halifax County in approximately a two-mile radius.

He also suggested the use of Kirkwood Adams instead of the Neighborhood Resource Center on Jackson Street.

Doughtie said the city feels like it has more than one site which would be comparable to the Neighborhood Resource Center.

The state, Scott said last week, had concerns with using the resource center because there was only one way in and out. There were also concerns about the lack of privacy some voters who used curbside to cast ballots had.