She had lived, taught and shared her Lord with others for over seventy five years.

When Helen accepted Jesus Christ as her personal Savior, the Reverend Daniel Hux, a local minister, was organizing the Darlington Baptist Church in Halifax County. Since 1946, she has dedicated her time and talents to the life and activities of this church. 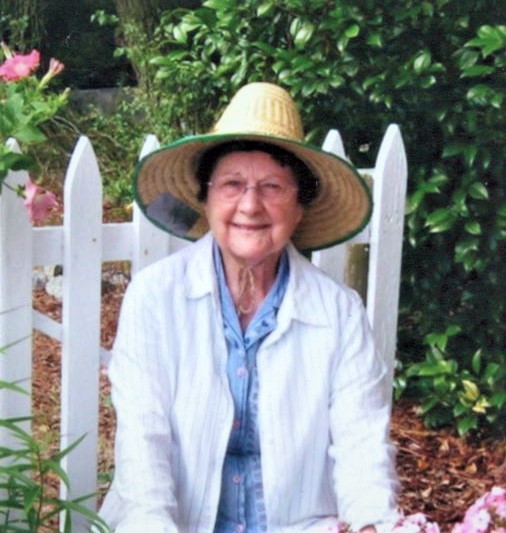 Helen was born in Macclesfield, NC on June 6, 1922 to Blanche Owens and Theodore Brandt and began her Century of Life.

Helen was two years old when her parents moved to North Dakota where Theodore began farming like his father, Frederick Brandt, and his nine brothers, as well as having four sisters. Helen was a special grandchild to Grandparents, Frederick and Rosina Brandt.

Although they spoke German, they were able to communicate their special affection for Helen. Helen developed her love of gardening from Grandpa and Grandma Brandt.

She truly became an unofficial Master Gardener, cutting her own grass until she was ninety years old.

When Helen was nine years old, Theodore Brandt moved his family back to North Carolina. It took the family, now with four children, thirteen days, during a very cold January, to arrive back in Macclesfield NC.

Helen is also survived by a sister, Dorothy B. Anderson of Minot ND, sisters in law, Gladys L. Brandt of Hampton VA, and Elaine P. Brandt of Upham, ND. Surviving Helen are many much loved nieces and nephews whic;h she knew by name and was personally in touch with on many occasions.

Helen deeply loved her family and many friends, always personally picking up children for church services, making lemon and chocolate pies for the bereaved and sharing her many plants (and planting them) with friends and neighbors. Even though she loved all who knew her, she loved her lord most.

The family will receive friends at Hockaday Funeral and Cremation Service from 11:00 am until 12:30 pm Thursday.

The funeral service will be held at 2:00 pm Thursday at Darlington Baptist Church. Rev. Blythe Wall and Mr. Gibb Harrison will preside. Interment will follow in Elmwood Cemetery in Enfield.

Arrangements are under the care of Hockaday Funeral and Cremation Service in Roanoke Rapids.