Dora Lee Wheeler Alston Hulse, 92, of Charlotte formerly of Pleasant Hill, NC, died Friday November 1, 2019, with her loving family by her side. 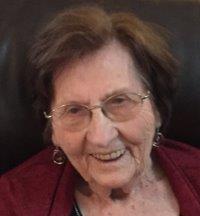 Dora, a native of Northampton County, was the daughter of the late James Henry and Jennie Belle Paris Wheeler.

She was married to the late, Julian Alston. They were blessed with seven children.

Dora was retired from the Boy Scouts of America. She was a Ranger at Camp Pomperaug in Union, Connecticut, for 20 years.

Funeral services will be on Tuesday November 5, 2019, at 2 PM in the Chapel of Askew Funeral and Cremation Services, 731 Roanoke Ave Roanoke Rapids, NC, with Rev. Jim Cox officiating.

Dora will be laid to rest beside Julian at Cedarwood Cemetery in Roanoke Rapids following the service in the Chapel.

The family will receive friends and family from 1 pm until service time.

In lieu of flowers memorials may be made to the Salvation Army or Community Home Care and Hospice 156 Corporate Blvd Indian Trail, NC 28079