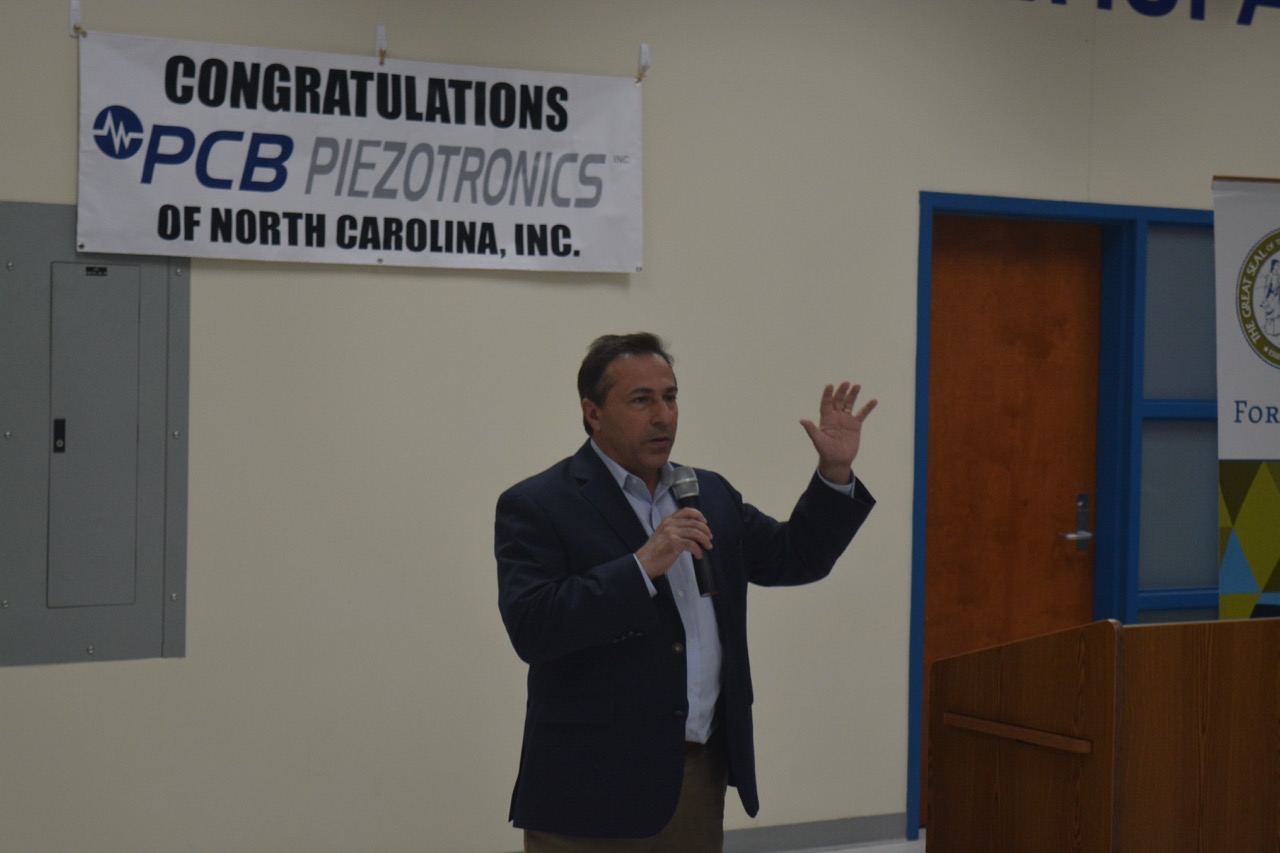 PCB Piezotronics of North Carolina, a designer and manufacturer of high-precision sensors used in a variety of test and measurement and industrial settings, will consolidate production operations currently located in China and California to its facility in Halifax County.

The company and state said today the consolidation will create 120 jobs and means a nearly $4.5 million investment at its plant off Highway 903 outside Halifax.

In a statement, Governor Roy Cooper said, “Rural North Carolina is a great fit for companies to build out their operations. Our workers understand modern manufacturing, and along with their communities they are ready to grow with companies like PCB Piezotronics in Halifax County.”

PCB Piezotronics is a wholly owned subsidiary of MTS Systems Corporation, which designs and builds test and measurement and industrial sensors that measure vibration, shock, pressure and other dynamic forces.

PCB recently acquired the Endevco division of Meggitt PLC, which designs and manufactures similar products to those that PCB makes.

Endevco currently produces these products in Xiamen, China and Irvine, California. The company’s new project expands its current facility in Halifax County in order to bring these production lines to North Carolina.

“One of the best business decisions that I have ever made was the decision to begin operations in Halifax, North Carolina in 2004 when we had to decide between expanding in our original home of New York state or expanding elsewhere,” said David T. Hore, president of PCB Piezotronics in the statement. “I have great confidence that our current Halifax workforce of 215 hardworking and dedicated employees will lead this integration in the same exceptional manner as they perform, day in and day out for PCB.”

At the plant today, Hore said, “It was a very difficult decision because as many of you know our corporate headquarters and where we were born was in Buffalo, New York, in 1967 in a garage.”

In 2003-2004 when the company decided to expand it went to the state of New York and North Carolina. “North Carolina won hands down,” he told employees and state and local officials. “North Carolina gets it at all levels. So if you are at any level of government or economic development in North Carolina or sit on any committees or boards you all did it and I thank you from the bottom of my heart that you came through for our company that has come through for you over the last 15 years as we made that decision.”

In 15 years, he said, the company has grown from one job to the 215 now employed in Halifax County. “Now we’re going to grow from 215 to another 120 jobs on top of that over the next four years.”

He praised the employees of the Halifax plant. “We’ve built something really special here in Halifax. We started something from scratch in a building when I first walked through it had stones on the floor and that’s about it. Fifteen years later look what we created, look at all the equipment, millions of dollars worth of equipment we’ve invested here. But most importantly look at all of you, the 215 employees.”

While the economic package the state put together was significant, Hore told those assembled at the plant, “You’ve proven to me over 15 years that there’s no more hardworking team, dedicated and loyal employees than in Halifax County, North Carolina. You guys made this decision and it’s good for you guys.

“There’s nothing like job security and job stability than your company investing $4.5 million and telling you we’re going to add 120 jobs. This makes sure we’re all going to be here well after I retire.”

Kenny Flowers, assistant secretary for the state Department of Commerce, told the employees and officials,”This is a company that knows North Carolina and because of that experience, which is a tribute to the great work of all you do right here, they had the confidence to expand here and invest in this community.”

Flowers said, “The company looked at many locations before deciding this was the perfect place for the project. PCB is a company that’s on the move and we’re proud to have them in North Carolina as our partners. PCB will have a positive impact on North Carolina and the community going forward.”

Economists in the commerce department estimate the project will increase or expand the state’s economy by nearly $151 million over 10 years, he said.

In the statement, state Commerce Secretary Anthony Copeland, said, “North Carolina offers manufacturers a business location that stacks up with top sites around the world. Major manufacturers like PCB Piezotronics have many choices when seeking a place to do business. This decision confirms once again that our state provides the right ingredients for success.”

Although wages will vary depending on position, the average salary for all the new positions will reach $33,760 and PCB also provides “world-class benefits,” including 100 percent company paid premiums for health insurance. The Halifax County average wage is $32,216.

PCB’s project in North Carolina will be facilitated, in part, by a Job Development Investment Grant approved by the state’s Economic Investment Committee earlier today.

Over the course of the 10-year term of this grant, the project is estimated to grow the state’s economy by nearly $151 million.

Using a formula that takes into account the new tax revenues generated by the new jobs, the JDIG agreement authorizes the potential reimbursement to the company of up to $940,000 spread over 10 years. State payments only occur following performance verification by the departments of Commerce and Revenue that the company has met its incremental job creation and investment targets.

Said state Representative Michael Wray,“PCB Piezotronics is a valued employer in our community. I’m pleased to see the company expand and everyone in Halifax County stands ready to help them grow and succeed here.”