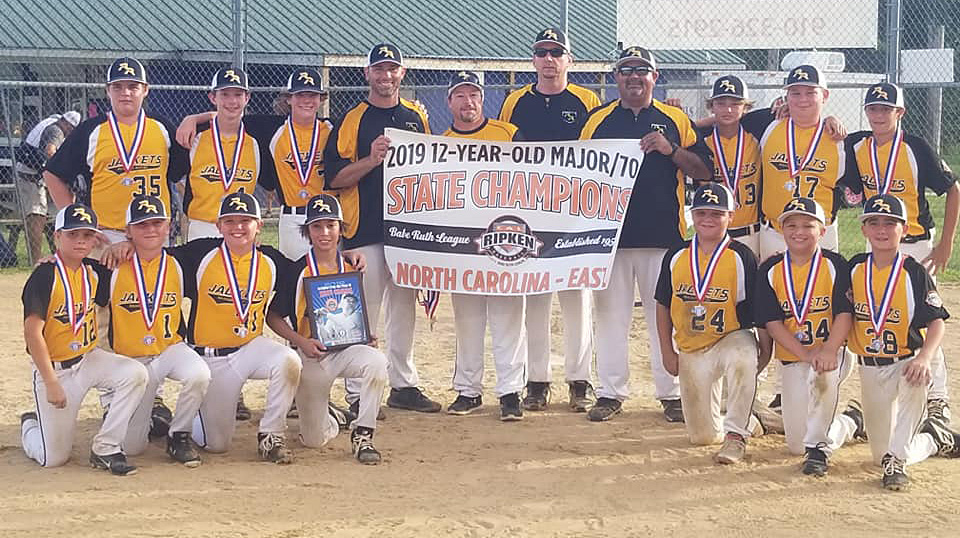 The Roanoke Rapids Youth Baseball Association (RRYBA) 12U Allstar team completed their journey for a State title Sunday by beating West Carteret in the semifinals and then beating Southern Pitt in the 2019 ENC Cal Ripken Major 70 Championship game.

This is Roanoke Rapids’ first ever State Championship since moving up to the 70’ bases division.

In the first game Sunday RR beat West Carteret 10-1 in the semifinals to advance to the championship game.

Pitchers Seth Tickel, Caleb Hall and Carson Duncan combined for a no-hitter in the game.

Gannon DeBerry, Connor Hammack and Jackson Midgette led the way offensively with 2 hits each while Collin Elias, Carson Duncan, Seth Tickel, and Avery Garner each had 1 hit including a 2-run homerun by Duncan.

In the championship game RR found themselves down early giving up 3 runs in the 1st inning and another 2 in the 3rd inning.  They entered the top of the 5th inning trailing by 5 runs and down to their last 6 outs when Connor Hammack led off with a hit and then Landen Briggs was hit by a pitch.  Collin Elias then singled to score Hammack, and Gannon DeBerry reached on an error which scored Briggs.

With the lead cut down to 3, Seth Tickel hit a 3-run homerun to tie the game.  Avery Garner then reached on an error followed by a fielders choice by Ayden Brantley.  Bryce Ott then walked and Wil White was hit by a pitch to load the bases.  After a strikeout, Connor Hammack hit a 2-out single to score Brantley and then Ott and White scored on a throwing error before the inning finally ended on the next batter.

Collin Elias, Gannon DeBerry, and Connor Hammack led the offense with 2 hits each, and Seth Tickel and Avery Garner each added 1 hit with Tickel’s being a 3-run HR.

Just 4 years ago mostly this same team competed in the same State Allstars and lost by 20+ runs in their only 2 games.  4 years later this group has grown to not only compete, but win a State Championship.

RR advances to the SouthEast Regional tournament as a 1 seed which will take place in Roanoke Rapids the week of July 16th.