As a social studies teacher, I have an obvious passion for history, but particularly that of local and state varieties.

Because of this, I worked with the Halifax County Commissioners in 2018 when you all provided a resolution of support for my state historical marker application for Enfield native, journalist and social justice activist Louis E. Austin.

It was unanimously approved by the NC Highway Historical Marker Committee and Austin’s marker was erected in Enfield in June 2019.

Considering recent events unfolding across our country, I ask the commissioners to work with me again.

I request the commission hold a vote to remove the tablet commemorating Halifax native and Confederate Brigadier General Junius Daniel, which rests on the front lawn of the Historic Old Courthouse in Halifax.

This marker was dedicated in November 1929 by the Halifax chapter of the United Daughters of the Confederacy (UDC).

Contrary to revisionist history perpetuated by groups like the UDC, the Confederate States of America did take up arms against its own republic, the United States of America, to preserve the ideology of White supremacy and the institution of chattel slavery. 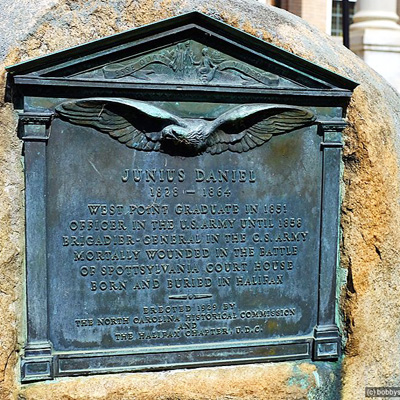 In 1790 during the first U.S. Census, Halifax County had the highest enslaved population in the state with 6.697, or 46.8 percent of its citizens. In 1860 on the eve of the Civil War, it had a total of 10,349 enslaved (53.23 percent of its population), which was fourth highest in the state. Today, according to the census, African Americans make up just under 54 percent of Halifax’s population.

It is as if those living here now directly descend from those who were enslaved here centuries ago.

Additionally, Caledonia Correctional Institution, the oldest state prison in NC, rests on the former plantation of John C. Johnston, who enslaved 271 according to the 1860 census.

Though the chapter that erected it is defunct, the Daniel plaque has sat for over 90 years.

In a predominantly black county, the message sent by this marker, is outright disrespectful, racially insensitive and racially inflammatory.

This tablet is on the lawn of a public building where not only do the commissioners meet, but also where the County Manager’s office, County Finance Department, County Legal Department and Board of Elections are housed.

While there is a 2015 law addressing the removal of markers and monuments, I believe the NC Historical Commission would not object if the commission voted to remove the plaque and have it placed in Historic Halifax.

Municipalities around the state are already doing this.

Halifax prides itself on being the “First In Freedom,” so where is our leadership and courage?

I emailed the county commission years ago about this same issue while a teacher in a local school district, and despite my efforts, I received no response from any of you.

Today, I ask that you favorably respond.

2019 NC Council for the Social Studies Teacher of the Year

Editor’s note: The author, a seventh-grade social studies teacher in the Nash-Rocky Mount school district, is a Roanoke Rapids area native and sent this letter to the Halifax County Board of Commissioners. He also sent the letter to rrspin.com.