Elkon (Dick) Neil, 87 of Lakeland, FL passed away peacefully February 17 at his home surrounded by his family. 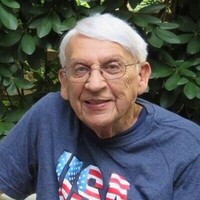 He joined the Army Infantry Division in 1952.

He went to work as an Electrical Engineer in Hyattsville, MD after leaving the Army.  He retired from CAE after almost 30 years as Vice President of Field Engineering.

In 1984 he married Violet Thompson who survives.

He was preceded in death by his parents; and one daughter, Susan Sullivan of Littleton, NC.

A memorial Service will be held at Calvary United Methodist Church in Littleton, NC. on Saturday, October 17, 2020 at 1:00 pm.

Prior to the service, visitation will be held and lunch will be served from 11:00am-12:30pm, in the church fellowship hall.

In lieu of Flowers donations may be made to Calvary United Methodist Church, 136 Calvary Church Road, Littleton, NC 27850 or a charity of your choice.

Arrangements for Mr. Neil are under the care of Hockaday Funeral and Cremation Service.