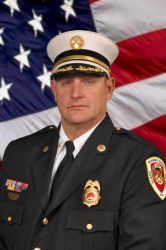 Kevin, a native of Halifax County, was the son of the late Edward Deward Hawkins, Jr.

He was a 1987 graduate of Halifax Academy.

Kevin was a supportive husband, wonderful son, brother and father.

He was involved in his community, coaching football and baseball, a member of Ducks Unlimited where he was the past president of the local chapter and was the district director.

He has been a firefighter with the Roanoke Rapids Fire Department for 20 years and was the battalion chief of B shift.

Kevin was a member of Valley Community Church where funeral services will be held on Saturday, October 26, 2019, at 11:00 a.m. with Pastor David Schmaltz officiating.

Burial will follow in Cedarwood Cemetery in Roanoke Rapids with firefighter honors.