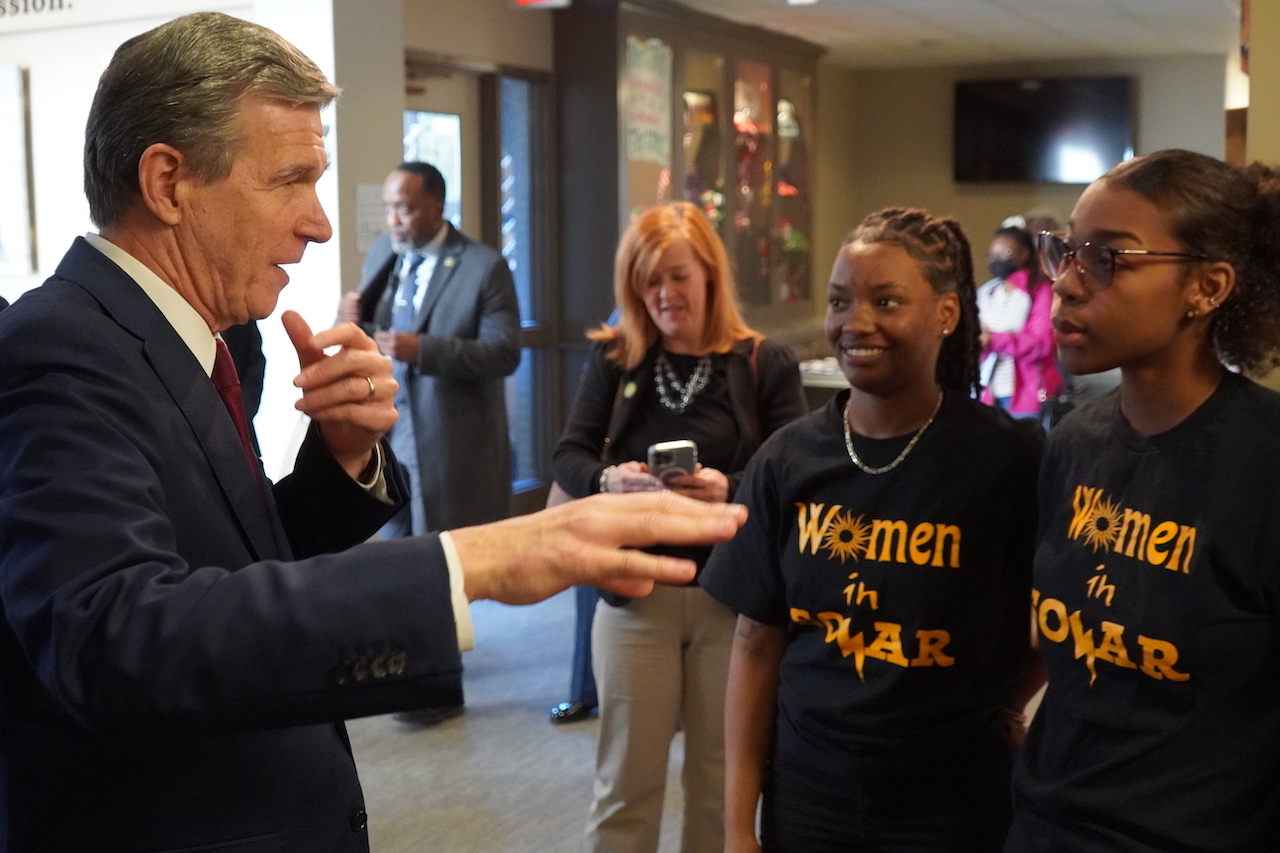 Seven female student representatives, within the Young Women of Solar program, traveled to the capital city with C4EE staff to expand their understanding and foothold of environmental justice advocacy.

The day trip also provided an opportunity for them to meet the recipient of the Larkins award, Felicia Culbreth-Setzer, for her commitment to equity and justice in the workplace and in the community as a state employee.

Dr. King’s quote, “We must come to see that the end we seek is a society at peace with itself, a society that can live with its conscience,” served as the ceremony’s theme.

C4EE and the Radiant Rays noted the service exemplified his character and the virtues he taught about love, peace and justice.

“When we embrace our diversity, the best of each of us can shine through,” said Governor Roy Cooper in his address.

Introducing the event’s keynote speaker, Michael Regan, administrator of the U.S. Environmental Protection Agency and former secretary of the North Carolina Department of Environmental Quality, Cooper praised Regan for his service to “position our state as a leader in environmental justice.”

Cooper commended Regan’s efforts to fight climate change and contaminated water as well as his leadership to back carbon emission reductions.

Regan remarked that he was grateful that he and the governor “share the same vision of a more just future” and that Dr. King was “the ultimate public servant.”

“The core values of the environmental justice movement are undeniably aligned with Dr. King’s teachings, and his actions,” said Regan. “For those who might not be familiar, environmental justice is the fair treatment and the meaningful involvement of all people, regardless of their race, color, national origin, or income with respect to the development, the implementation and enforcement of laws, regulations and policies. So, it’s really two-fold. And it’s very simple.”

He also mentioned that his travels throughout the country and conversations with “people for whom the future has not always been certain, and still isn’t,” has helped him press forward environmental, economic and racial justice advocacy.

“All people deserve access to clean air and clean water,” said Regan. “And people have the right to be informed and make decisions about the policies and practices that directly impact their health, their safety and the wellbeing of their children. I vowed to protect the health and safety of all communities, especially those who have long suffered at the hands of indifference, neglect and inaction.”

The Radiant Rays, who attend Halifax County, Roanoke Rapids and Weldon City schools, noted the trip allowed them to meet state leaders who have a vested interest in their mission. They added it also reinforced their commitment toward improving their communities through volunteerism and community service.

Prior to the ceremony, the young women visited North Carolina State Parks Director Dwayne Patterson whose office is in the North Carolina Museum of Natural Sciences, which offered them an opportunity for a quick tour.

“It’s inspiring to see these brilliant young women who represent the future of conservation in North Carolina,” said Patterson.

The young women also met and spoke to Director of the Office of Public Engagement Tracy Lovett from the Governor’s Office and the Department of Public Safety Secretary Eddie Buffaloe.

“The experience of meeting Gov. Cooper and Mr. Regan, in addition to Ms. Culbreth-Setzer, Patterson, Lovett and Buffalo, allowed these ambassadors from Halifax County to grow and thrive in their clean energy educational and professional pursuits, equipping them with the tools to become successful professionals in renewable energy fields,” said Mozine Lowe, executive director of C4EE. “This visit showcased the value and dedication of these young women who are committed to educating and advocating for their community, as well as for climate change and social justice, to generate future momentum in North Carolina’s clean energy future.”