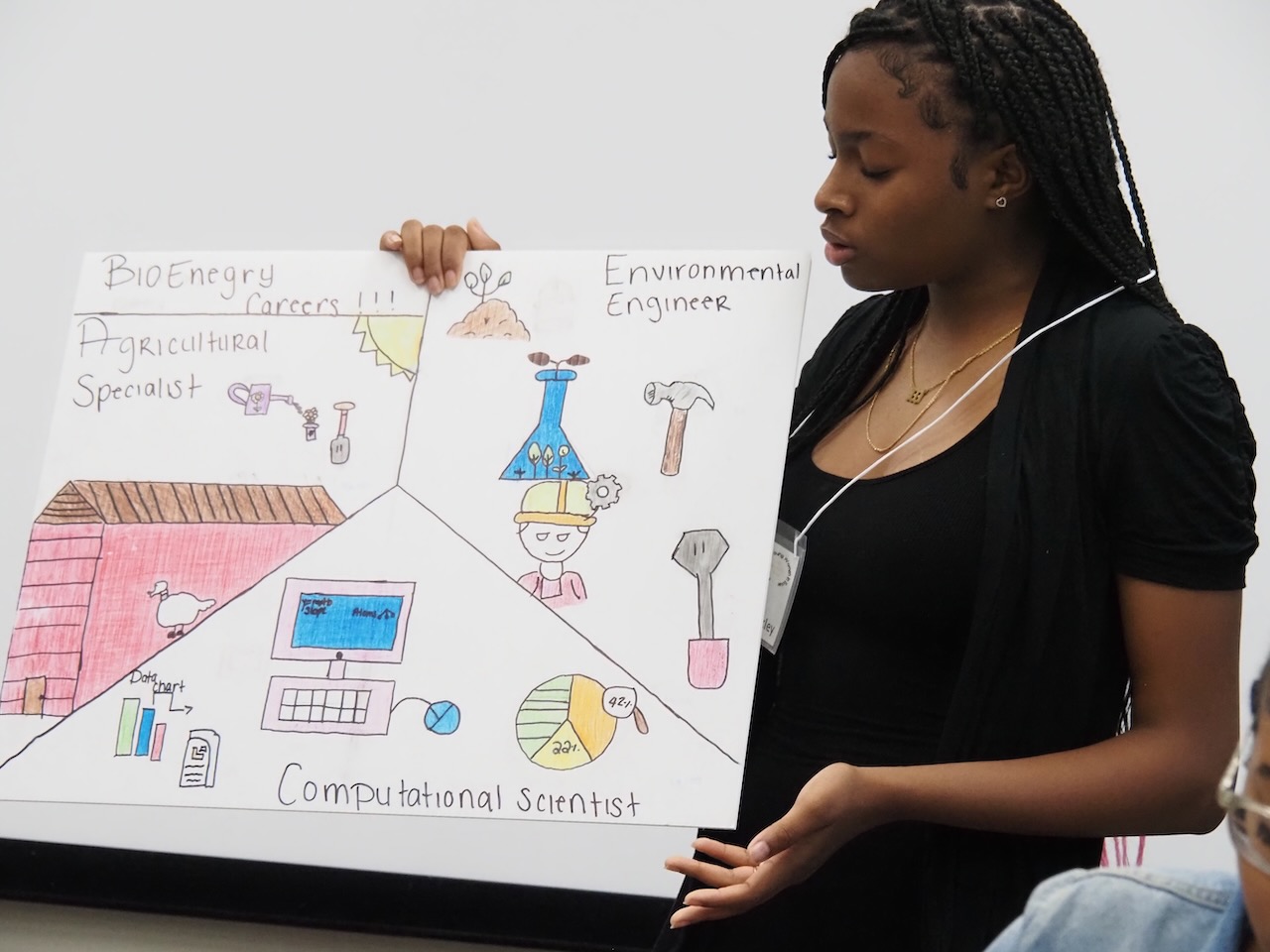 They call themselves the Radiant Rays — 10 girls who went through a five-week internship at the Center for Energy Education, an internship which rewarded them with $1,500 scholarships at the end of the program.

The name they gave themselves seemed fitting as they cheered one another on through a reception held in their honor at the center Friday evening where they discussed the program and gave the audience an overview of their accomplishments.

The internships are the first of their kind in the country, said the center’s executive director, Mozine Lowe.

“These 10 girls, they have made history,” Lowe said. “This is the very first program for women in solar, young girls of color. The industry is growing at a tremendous rate. It is coming to Halifax County. There are so many jobs that are available to any and everyone. You have to know that the jobs are out there and you have to know the people that have the jobs that are out there.”

Lowe said the 10 girls have had a tremendous experience. “They were first of all identified by their academic leaders in the community. They were deliberately selected to be part of the Young Women in Solar at the Center for Energy Education.”

The goal of the program, Lowe said, was for the girls to meet high-level leaders in companies. “We wanted them to sit in their board rooms. We wanted them to talk to them about their jobs, their careers, how they managed to be at the top of their jobs.”

She said the organizers wanted the girls to ask these leaders what they were doing to make it possible for girls of color to have jobs in these companies.

The internship took the girls to Geenex in Charlotte, North Carolina A&T State University, North Carolina Central University, and the Environmental Protection Agency in Washington. “We wanted the company leaders to meet them, to get to know them, to consider being their mentors next summer.”

Lowe said this will not be the last opportunity. “With the partnerships with the local schools, we hope to continue this program throughout the school year.”

And the journey for the Radiant Rays doesn’t end with the internship. They have been talking with a videographer in London who is creating a film about the girls. “He is telling their story to the world because they’re very unique. It’s just amazing how these 10 young women have embraced all of this newness — coming to the center, learning about clean energy, meeting company leaders, going to Dominion Energy into the dam. It’s just amazing. They went to Howard University. We tried to give them the opportunity to see as many universities, to meet company leaders and just to know what the world is like.”

The plan going forward, Lowe said, is for the 10 girls to become Center for Energy Education ambassadors and to meet once a month. “We have big plans.”

There is a Solar Fest event coming up on October 6 where the girls will be featured as presenters.

The North Carolina State University Clean Energy Technology Center has plans for the girls to present at the 2023 Energy Conference. “I want you to know that they have done some tremendous things and I realize that it was through your support and the support of the schools that this was possible,” Lowe said. “Companies are really interested in them and following their career path and there’s just so much more to come.”

In her welcoming remarks, Brown said, “For the last five weeks me and my sisters have been networking and meeting new people in renewable energy careers and traveling to different colleges.”

In her remote message to the students and the audience, Rita L. Joyner, a senior advisor for the North Carolina Sustainable Energy Association, said, “I’m so proud of the young ladies and their achievements.”

Joyner’s message focused on a three-point plan for success. “You must dream with your eyes open,” she said. “I want you to spend time with yourself and explore your possibilities.”

She advised the students to write out their goals. “Write with detail. What will it look like? What will it feel like … and use all of your senses as you’re writing down your plan.”

The third point, Joyner said, is to achieve those dreams. “Work at it until your definition of success is accomplished.”

Jim Harris, director of land development for Geenex, said, “This is Geenex’s dream. This was George Veit’s and Mozine Lowe’s dream to bring a center for energy education to the area to help the communities that we work in.”

Afterward, Wright said, “One thing I learned is that networking is very important because sometimes it’s not about what you know but who you know.”

Said Cabiness: “The takeaway I got from this is it’s a great opportunity and my generation will be the generation to right the wrongs.”