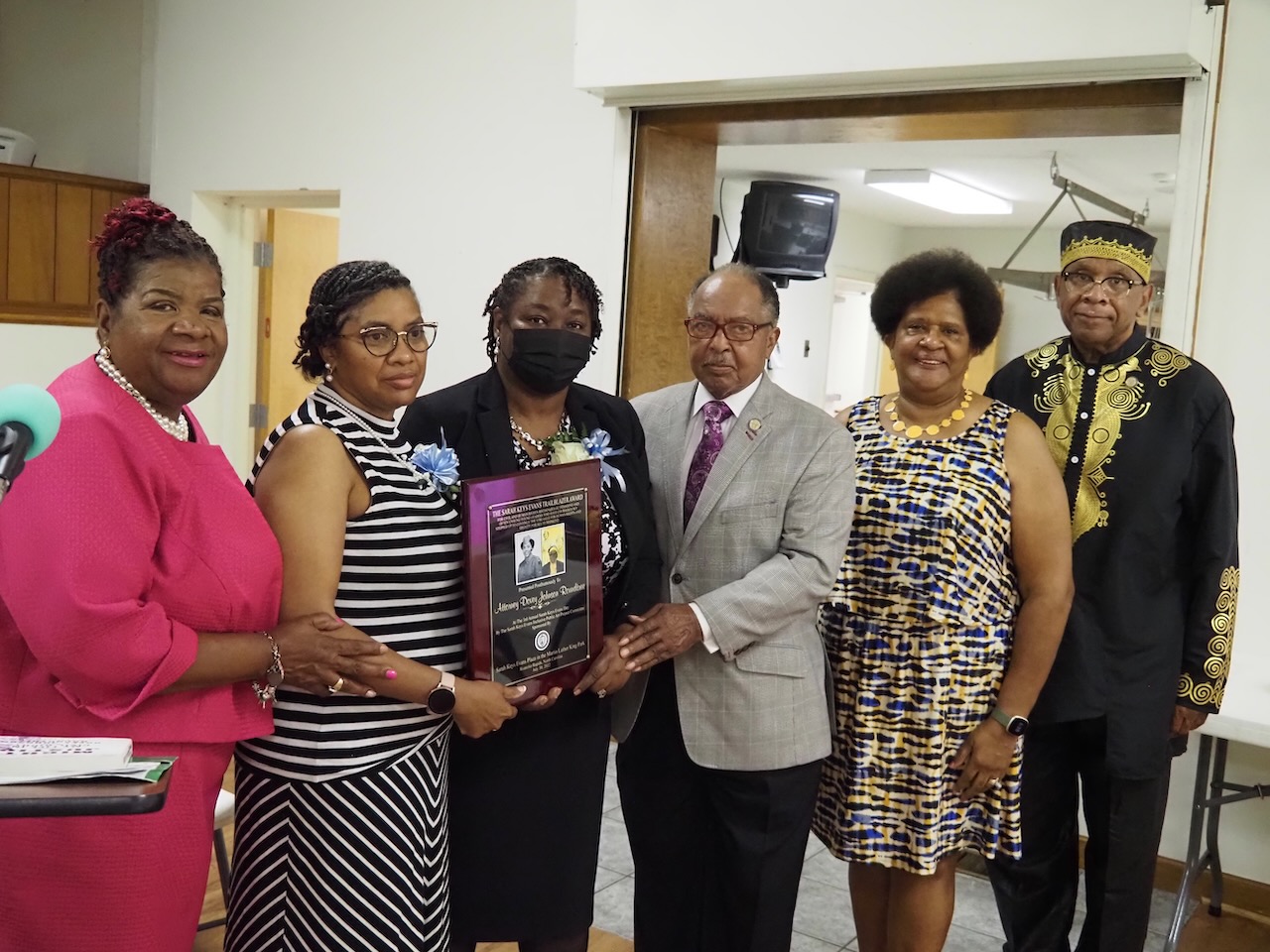 Two people were honored Saturday as trailblazers following the footsteps of Sarah Keys Evans  — one posthumously for providing legal representation to the woman who refused to give up her on a bus stopover in Roanoke Rapids and the other to a 14-year-old advocate for children’s rights.

The first Trailblazer award went to the family of Dovey Roundtree, the attorney who represented Evans as she took her case to the Interstate Commerce Commission, ultimately winning the fight to end segregation in state-to-state travel.

The Youth Trailblazer Award was bestowed to Elijah Lee, who holds a yearly march against child abuse in Roanoke Rapids and Virginia, and is also letting his voice be heard in the Virginia legislature.

The committee also honored numerous community partners during the program.

Ophelia Gould-Faison, a committee member and Littleton town commissioner, said, “There is more to Ms. Roundtree than helping Ms. Keys but today I’m going to highlight how she came about to helping Ms. Keys win that case.”

Like Evans, Roundtree was a member of the Women's Army Air Corps. She received her law degree from Howard University School of Law where she was one of five female students.

In September of 1952 Evans and her father met with Roundtree and her law partner. “For attorney Roundtree the Keys case became a personal mission. Ms. Roundtree said, ‘It was as though I sat looking in a mirror. So strong was my sense of walking where Sarah Keys had walked.’”

Attorneys warned the family the case wouldn’t be easy.

The case was repeatedly denied in the courts. Roundtree and her partner then decided to take the case before the ICC.

After several denials before the ICC, in the fall of 1955, the commission notified the law partners that it had ruled in favor of Keys vs. Carolina Coach Company case, six days before Rosa Parks’s protests started in Montgomery. “This ruling … makes it unlawful to discriminate where a person must sit on any form of public transportation.”

Charlene Pritchard, Roundtree’s goddaughter, said, “I am totally overwhelmed. As I entered I felt nana’s presence. She loved people. She had a servant’s heart. She lived to be 104 years-old and what she most wanted was to give to young people and she wanted to pass the torch.”

Pritchard said she was so grateful and so thankful “for all of you and what all of you have done. I know that she would be overwhelmed. She was quiet in terms of receiving awards.”

Addressing Lee, she said, “Continue to pass the torch on. You be the change-maker in this world. I’m just grateful.”

Charles McCollum, president of Eastern Carolina Christian College and Seminary, and also one of the people behind the creation of the inclusive arts project honoring Evans at Martin Luther King Park, introduced Lee and said, “Our next recipient is already doing outstanding things in our community and even our nation.”

He called Lee a national advocate for young people who for the last five years has organized annual child abuse prevention events. “In an effort to support young survivors of this impactful trauma Elijah organized and raised funds for pediatric safe rooms at (ECU) North Hospital. He recently raised $12,500 for a similar project at the children’s hospital in Richmond, Virginia.”

He is also the founder of a non-profit organization called Hear Our Voices. “For this work he was named the 2022 Youth Entrepreneur of the Year by the Metropolitan Business League.”

Said McCollum to Lee: “I’m proud of you. I’m proud of what you stand for. We’re proud that you have come to receive this honor.”

Lee said, “I give all glory to God for this.”

He also recognized the help of McCollum. “As I go out and speak and advocate for our young people I want you to know I stand on your shoulders.”

To the Roundtree family he said, “I want you to know that I stand on your shoulders. And while Ms. Roundtree has passed, may you know that her legacy lives on. May you know that the current generation will not stop. We will not stop in front of any barrier. We will prevail. In the words of the great Dr. Martin Luther King Jr., ‘We shall overcome.’”