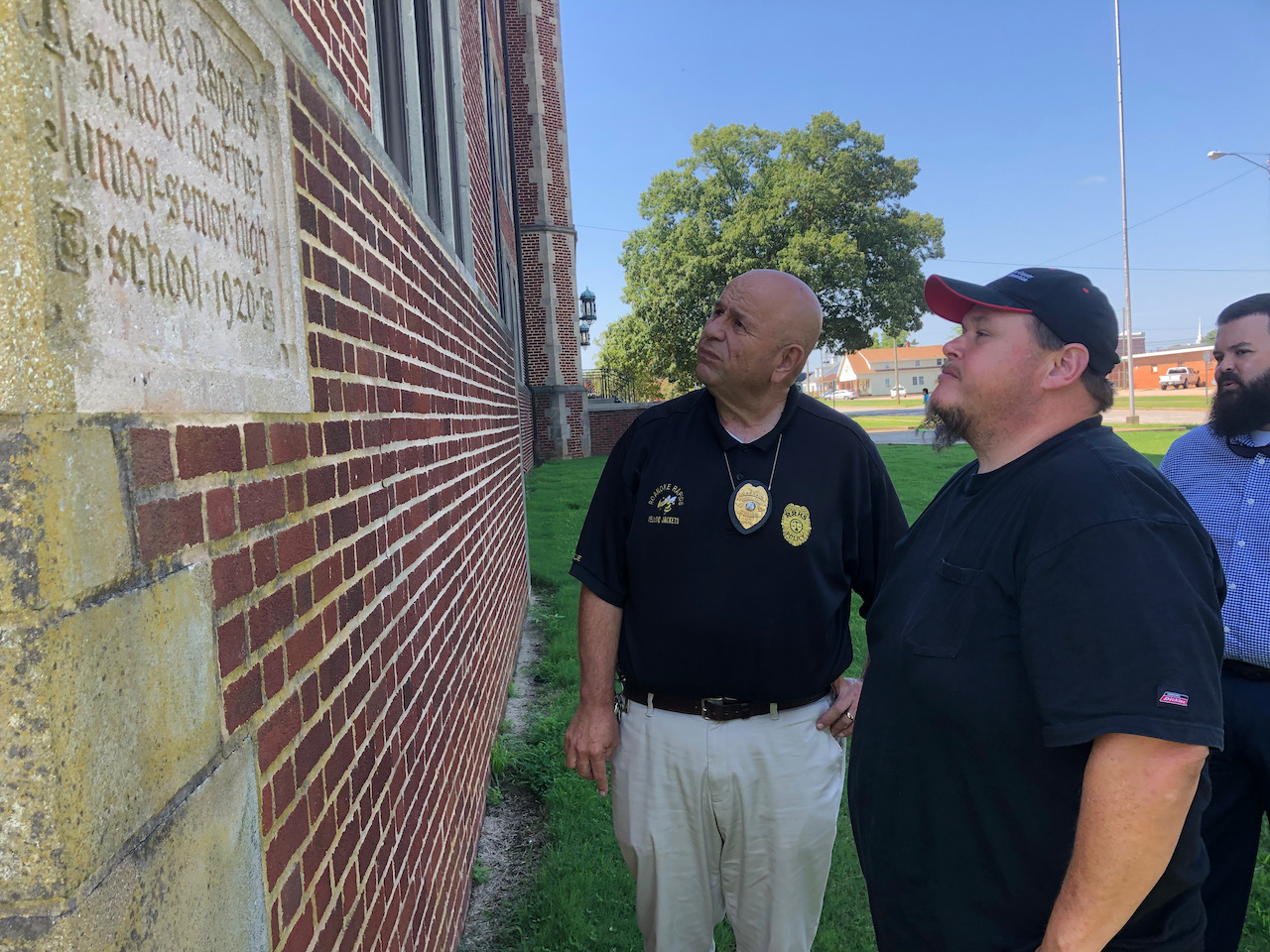 Then and now, Masons to oversee RRHS cornerstone ceremonyFeatured

In 1920, the Grand Lodge of North Carolina oversaw the laying of the cornerstone as Roanoke Rapids High School was being constructed.

This year as the school celebrates its 100th anniversary, the Grand Lodge will return in October to inspect the cornerstone as it is removed to retrieve items left in a time capsule.

“It doesn’t happen often,” said Phil Johnson, a grand steward with the state lodge, “but it’s a great opportunity for Masonry. The Grand Lodge of North Carolina is doing the ceremony.”

Johnson said between 10 to 15 members of the Grand Lodge will be in attendance, including Grand Master David Wicker.

(For a list of 100th anniversary events visit this link)

Along with the Masons from the state lodge, Matthew Council and Daniel Harris will be in attendance.

Council is a member of Royal Hart Lodge 491 in Littleton and Harris is secretary of Widow’s Son Lodge 519 in Roanoke Rapids.

For both men, Masons and alumni of RRHS, it is an opportunity they look forward to.

“It’s truly a once in a lifetime event,” said Council. “This is a profound opportunity as a Mason and a graduate.”

In a recent interview Roanoke Rapids High School Alumni and Friends Association board member Rex Stainback revealed some of the items known to be contained in the time capsule — a 1920 penny, a Bible and Masonic items.

In 1920 the cornerstone was laid with full Masonic honors by James C. Braswell, a Whitakers native who was grand master of the North Carolina Grand Lodge.

Cindy Garris Boone, a member of the alumni and friends association, said during the October 2 ceremony, which begins at 10 a.m. with a parade, the Grand Lodge will inspect the cornerstone and read the inventory of the 1921 time capsule deposit and then items that will be deposited in the new time capsule. The local lodge members will support the Grand Lodge during the ceremony.

“We’re going to replicate what took place then,” Boone said of the upcoming ceremony in October. “We’re going to keep it historical and have the grand master and the other Masons there.”

Boone said the parade down Hamilton Street will pass by the cornerstone located on the front northeast corner of the school.

The Masons will exit the parade and proceed to the cornerstone.

The Grand Lodge will take charge of the ceremony and the cornerstone will be consecrated with offerings of corn, wine and oil, each of these items holding a special significance — a ritual which is fundamentally unchanged for over 100 years. Upon completion of the rituals, the ceremony will be closed by the grand chaplain.

“The cornerstone ceremony will be such a rare opportunity to observe,” Boone said. “As an alumni, it is truly a once in a lifetime event to be able to witness this historic ritual with the rededication of the cornerstone. Our community thrives on local history, and seeing the copper box that was placed by Grand Master Dr. James C. Braswell 100 years ago, will be an honor in itself.”

Widow’s Son Lodge 519 participated in the 1920 dedication and will assist in the rededication. “Most members have never had the opportunity to be a part of this sacred ritual and are looking forward to replicating what was done in 1920,” Boone said.

The 1920 ceremony took place on a Saturday afternoon — September 25.

Speakers for the event included Hobart B. Upjohn, the architect of the high school, and state Representative W.L. Long.

The Masons gathered at the lodge room of Widow's Son Lodge and led by the Roanoke Rapids Band, the procession marched up Roanoke Avenue to the building where the grand master took charge of the ceremonies, and after making a few introductory remarks pertinent to the occasion, assisted by the lodge, he formally laid the cornerstone with full Masonic honors.

Boone said her research shows it has been customary for Masons to lay cornerstones of public buildings through ceremony. “Traditionally the stone is placed in the northeast corner of the foundation as was done for the Roanoke Rapids High School's cornerstone.”

On September 18, 1793, George Washington, who was also a Mason, laid the cornerstone of the United States Capitol. “A delegation of Masons in full regalia accompanied him in the first parade held in Washington, D.C., in a grand procession to the construction site for the U.S. Capitol. More than two centuries later we are still celebrating the honored history of our nation's cornerstones.”