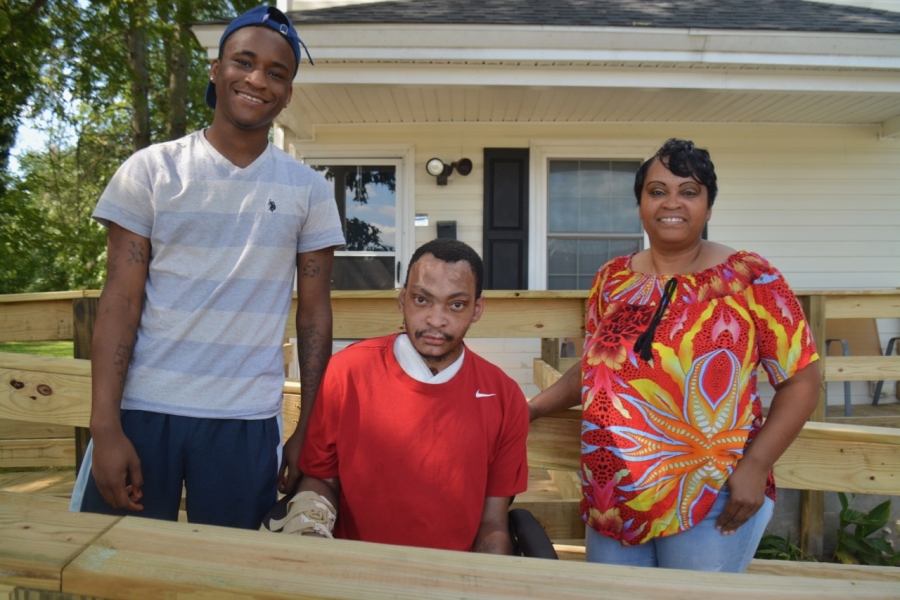 Zachary Tillery has more mobility now thanks to the efforts of a Northampton County church group and members of the Roanoke Rapids Fire Department.

Creeksville Baptist Church Brotherhood, a men's ministry, and several firefighters came to the home of Tillery's mother to construct a ramp for the man who was recently released from the UNC Jaycee Burn Center in Chapel Hill after sustaining life-threatening injuries in an October fire.

Tillery sustained third-degree burns over 25 percent of his body in the aftermath of the October 12 fire which occurred on Franklin Street where he was visiting friends.

He sustained significant carbon monoxide poisoning and was rescued by Roanoke Rapids firefighters following their response.

The injuries he sustained have affected his mobility, his ability to talk and even his balance, Felisha said. He was in an induced coma for nearly four months.

Arriving home in August, care of Zachary has been constant, his brother, Romelo Sexton, said.

"We were born on the same day," Romelo, 17 said. "We all try to stay strong everyday. We are a strong family."

The fire, said Romelo, changed family dynamics. "We all got closer."

Felisha said there has been an outpouring since the fire. "We've had a lot of help and support from the community."

Coming home on August 14, the family, as shown in the photos taken by Creeksville Baptist Church Pastor Andy Sloan, found the initial ramp to get Zachary in and out of the house was inadequate.

On Saturday morning while his mother was at work, Romelo watched as members of the men's group arrived at the family's home. "They said a prayer."

The parking lot which was part of the former Rosemary Mill was full. "The whole yard was full of wood," Romelo said.

When Felisha got home, she was moved. "I was ecstatic about what took place. I offer a lot of thanks to Creeksville Baptist Baptist Church and the Roanoke Rapids Fire Department."

"We've been doing ramps for five years or so," Andy said. "We may have done 20 ramps whenever we hear of special needs. The whole purpose is to share the grace and mercy of Jesus Christ. We feel we can do that in a tangible way to allow easier access in and out of people's homes."

While Brotherhood mainly builds ramps for people in Northampton County, they have also reached out to other areas when a need is demonstrated, Andy said.

They have built ramps for stroke victims, older people who have mobility issues, people who are wheelchair bound and those have sustained injuries in mishaps where they can't walk.

Zachary's plight came to the attention of the church through Andy's son, Ben, who is a Roanoke Rapids firefighter.

"I remember when my son talked to me about the fire," Andy said. "I could really hear the urgency in his voice to get them a ramp built. There's a little personal investment with my son being there at the beginning and seeing Zachary's recovery."

The abilities within the church group make these projects go smoothly, Andy said. "God has blessed this church with some great men with knowledge. They don't mind at all spending their Saturdays. God's really placed these group of guys together. It's a really smooth operation. We try to do everything by the book, get permits. We want this ramp to last and be safe. We had to alter a little bit of their porch to make it safe."

For Andy and the group, it's part of the ministry. "Everything we do is a testament to God."

Helping them were the firefighters. "Some of the crew had seen him (at the October fire). These guys had just worked a 24-hour shift and they came here and stayed as long as they could. We want to try to give hope to folks because life can be hard. For my son to be there and have an investment it's just in God's timing."

For Felisha, the work done to make access for her son and his caretakers easier is overwhelming. "We're just very grateful. It's been nothing but blessings after blessings. For us, we count them every day. It's a blessing that he's here."

Zachary is overwhelmed as well. "I don't know what to say," he said. "There's been too much since October. I feel blessed."