The Roanoke Rapids Yellow Jackets Men's soccer team hosted the N.C. School of Science and Math in the first round the NCHSAA 2A State Championship play-offs. The Jackets fell 1-5 ending their post-season play.

Because the last home match was forfieted, the 2019-20 seasons were reconized before the game.

Abdul Alrahimi- #7, he is the son of Ali Alrahimi and Sabah Alrahimi. He has played 3 years for the yellow jackets. He has a 3 year total of 12 goals and 9 assists. He has served as a captain for this year’s team.  His future plans are to attend Wake Forest University.

Bander Alrahimi - #9, he is the son of Tahniah Alwaili and Sameer Alrahimi. This is his third year playing for the yellow jackets.  He has a 3 year total of 2 goals and 2 assists.  He plans to attend NC State University.

Erick Gonzalez - #15- escorted by his mom, Norma Velazquez and stepdad Chayan Jimenez.  Erick has played 3 years for the yellow jackets and has scored 1 goal. His future plans are to attend Halifax Community College and major in computer science.

Nicholas King- #21- he is the son of Deborah Rose and David King. Nicholas has played for the yellow jackets for 4 years with 1 goal and 1 assist. He has served as a captain of this year’s team.  He plans to attend UNC Wilmington.

Logan Walton - #8- he is the son of Brad Walton, Brandi and Buddy Brown.  He has played all 4 years for the yellow jackets and has a 4 year total of 5 goals and 10 assists.  After graduation, Logan plans to become a mechanic or join the military. 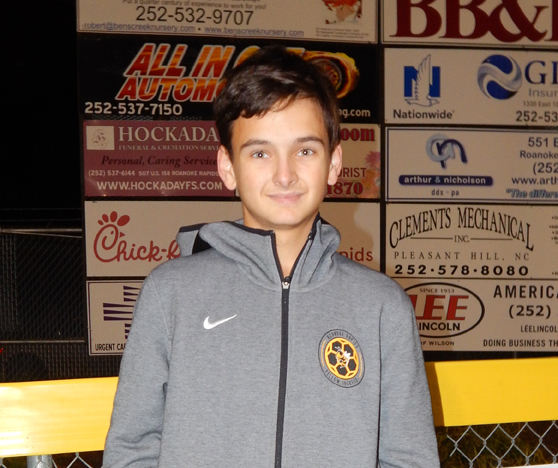 Connor Neal-he is the son of Traig and Ashley Neal. Connor has been the manager for the soccer team for the past 2 years. He plans to enter the work force after graduation.

These seniors hold a 4 year record of 63-14-3, with 2 Northern Carolina Conference Championships.