He was born in Northampton County on March 24, 1947 to the late Willie Thomas Barrett, Sr. and Elizabeth Vick Barrett and was preceded in death by his son, Robert Keith “R.K.” Barrett, his sisters, LaVonne Barrett and Vickie Gilliam.

“Tommy” was actively serving as the Mayor of the Town of Conway, North Carolina. 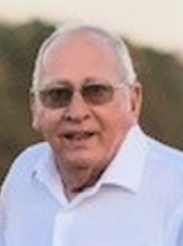 He was a member of Conway Baptist Church, was owner/operator with his late son of the R.K.T. Lawn Care; a skeet shooter traveling to many competitions with his family.

“Tommy” was an avid Ford fan and had a 1968 Ford Mustang which he restored with his family and carried to many shows.

Later in life he found a passion for fishing.

He also served as a town commissioner in Conway and a member of the Conway Volunteer Fire Department, prior to his service as Mayor.

He worked for a short period at Georgia Pacific and retired after 38 years from International Paper in Franklin, Virginia.

“Tommy” was a proud Vietnam Veteran serving his country in the U.S. Air Force. Most of all, he was a beloved husband, father, grandfather, a hard worker and loved his grandchildren and the town of Conway which he was dedicated to.

Graveside Services with Military Honors will be held in the Town of Conway Cemetery on Friday, June 17, 2022 at 11am with Rev. Willie McLawhorn and Justin Rose officiating.

The family will visit with friends immediately following the service at the cemetery and at other times at the home.

In lieu of flowers, memorial donations may be made to the Conway Fire Department.