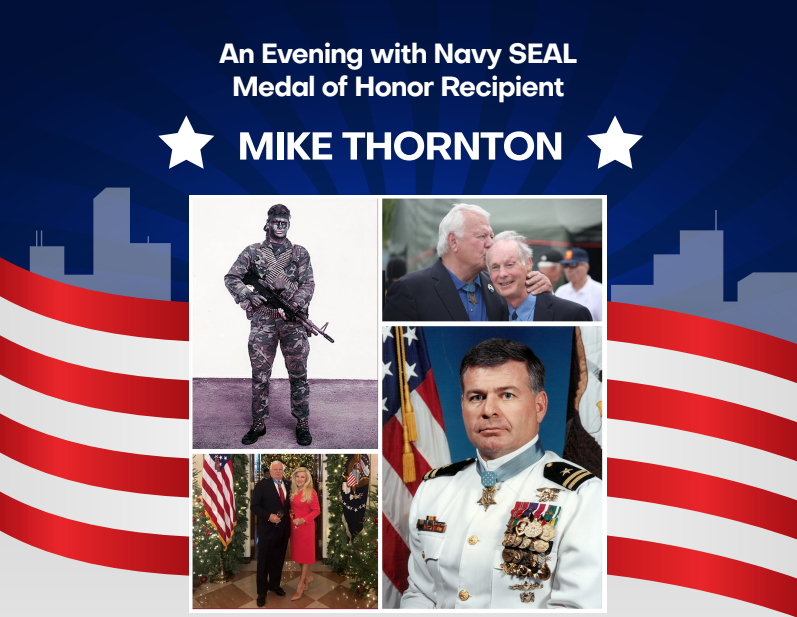 Medal of Honor recipient, Navy Seal to speak in October

Medal of Honor recipient and United States Navy Seal Mike Thornton will be the special guest speaker at an event which will be held at The Centre on the campus of Halifax Community College October 5.

The event, which begins at 6:30 p.m., is being sponsored by Arthur & Nicholson. It is free and open to the public.

Thornton, a native of Greenville, South Carolina, was hailed for his actions in the spring of 1972 while participating in a Vietnam-era operation which saved the life of Lieutenant Thomas Norris and the safe extraction of the patrol team.

He received the Medal of Honor for conspicuous gallantry and intrepidity at the risk of his life above and beyond the call of duty while participating in a daring operation against enemy forces.

Petty Officer Thornton, serving as an assistant Navy Advisor, along with Norris, accompanied a three-man Navy SEAL patrol on an intelligence gathering and prisoner capture operation against an enemy-occupied naval river base.

Launched from a Vietnamese Navy junk in a rubber boat, the patrol reached land and was continuing on foot toward its objective when it suddenly came under heavy fire from a numerically superior force.

The patrol called in naval gunfire support and then engaged the enemy in a fierce firefight, accounting for many enemy casualties before moving back to the waterline to prevent encirclement.

Upon learning that Norris had been hit by enemy fire and was believed to be dead, Thornton returned through a hail of fire to the lieutenant's last position; quickly disposed of two enemy soldiers about to overrun the position, and succeeded in removing the seriously wounded and unconscious lieutenant to the water's edge.

He then inflated the lieutenant's lifejacket and towed him seaward for approximately two hours until picked up by support craft.

“By his extraordinary courage and perseverance, PO Thornton was directly responsible for saving the life of his superior officer and enabling the safe extraction of all patrol members, thereby upholding the highest traditions of the U.S. Naval Service.”

Thornton joined the Navy upon graduating from high school in 1967 and completed the rigorous training to join the SEALs, the Navy’s elite sea-air-land special operations force.