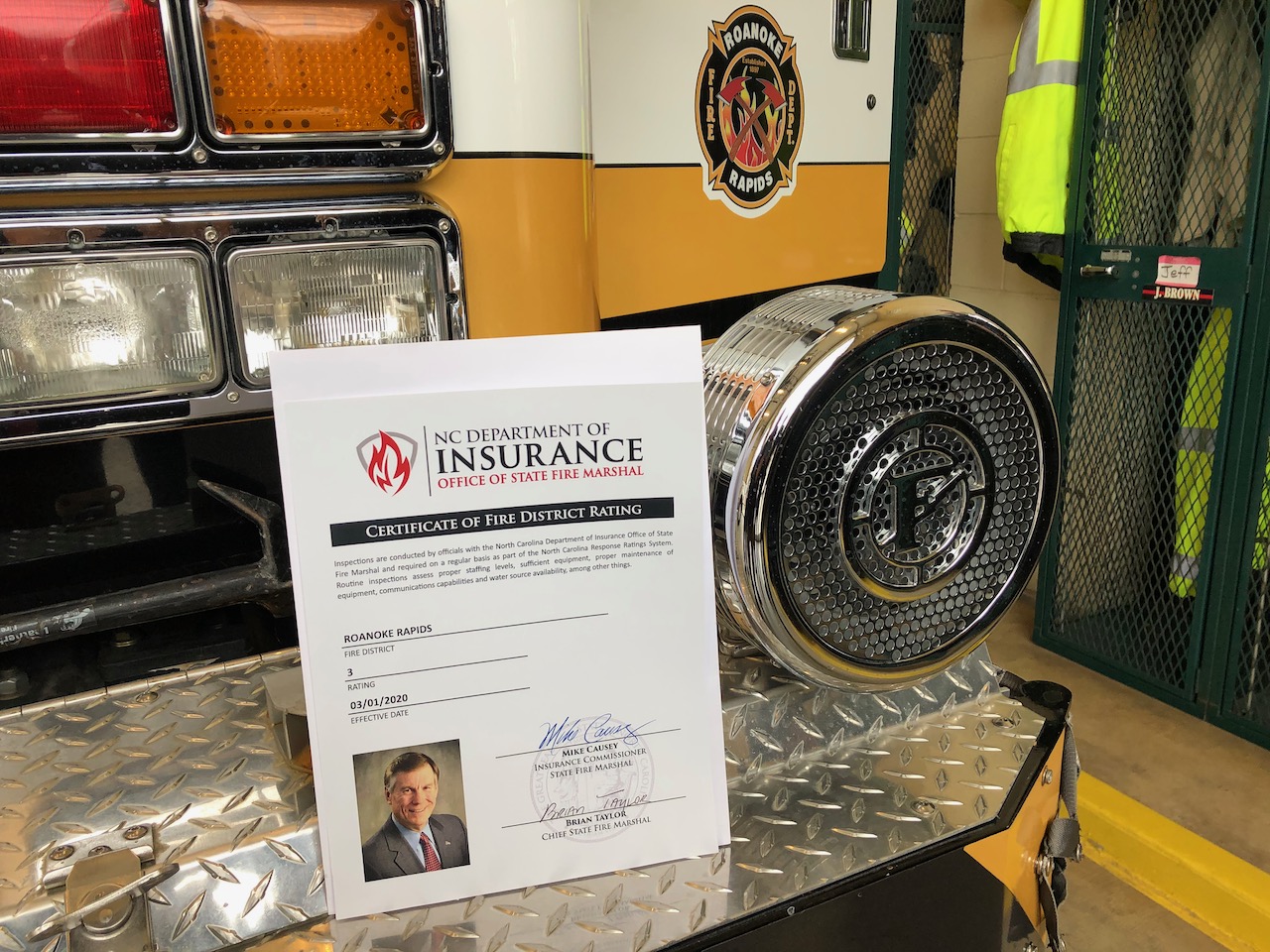 The Roanoke Rapids Fire Department saw its fire suppression rating improve from its last inspection to a grade of 3.

Before the latest inspection, the fire department had a rating of 4. The new rating goes into effect March 1.

With the improved score, Chief Jason Patrick said Thursday, “It is possible that with meeting certain conditions and depending on insurance carrier policies that commercial businesses and industries could see an average decrease of 8 percent in their insurance premiums.”

State Insurance Commissioner Mike Causey, who is also state fire marshal, sent Patrick a congratulatory letter on the rating improvement. “I commend you and your department for your dedication and commitment to making your community a safer place to live.”

The Office of State Fire Marshal said in a release included with the letter, “ … A higher rating does suggest that a department is overall better-equipped to respond to fires in its district.”

Overall, the department earned 73.35 credits out of a possible 105.50, according to a review sheet.

In the release on the rating, Causey said, “I’d like to congratulate Chief Patrick for the department’s performance and for the hard work of all the department members. The citizens in the town of these districts should rest easy knowing they have a fine group of firefighters protecting them and their property in case of an emergency.”

The fire department received notification in March that OSFM was coming to grade the department. “Our department had not been graded since 2008,” Patrick said.

In September the inspection was performed. “At that point we were a class 4 fire department,” Patrick said. “In North Carolina, out of 1,520 fire districts there’s only 121 with a class 3. Us coming in at a class 3 means there’s only 59 other departments that have a better rating than we do at this time.”

Training-wise, Patrick said, “We’ve got to get maximum credit. We have to have 192 hours per man for training.”

The facility, weather permitting, is expected to be completed by the end of the month.

The inspection was exhaustive, Patrick said, from checking hydrants to checking every piece of apparatus the department has. “It’s a lot of work that goes into maintaining this.”

Bailey said, “We had a great experience. What happens is about 90 to 120 days before an inspection occurs, Chief Patrick would get his notice. Once I know the inspection notice has gone out I’m going to pick up the phone and call him and make myself available.”

Bailey said classes are held to help departments know what to expect during the inspection process.

Fifty percent of the grade is the fire department itself, Bailey said. “It’s the apparatus, training, maintenance on the vehicles. There’s a lot of things within those 50 points that are directly attributed to the fire department.”

Ten percent of the process is communications and there are 5 ½ bonus points for community risk, which Bailey said encompasses investigations, inspections and fire prevention.

Bailey said the RRFD has very well-maintained apparatus, the department’s training program “was very much in order and, of course, with the schools around the area you can pretty much go out and do fire prevention.”

Patrick said of the rating improvement: “It means a lot we were able to stay on top of things. That class helped us quite a bit. It showed we were still maintaining everything. Everybody in the past had just maintained everything and did a good job with fulfilling what the duties are to keep this rating. We’ve been adding stuff. We’ve been doing a little bit better job with our community risk reduction with the fire prevention and getting out doing more and more of that.”

With a new position to be headed by Michael Butts — fire and life safety educator — Patrick expects that aspect of the department to step up in the future. “That’s going to be even better and hopefully we’ll score even better on that the next time.”

Clouston said the insurance impact of the improved rating on businesses and industry will be based on how these entities are insured. “We can’t really characterize how they’re going to do that. We can’t really characterize what the savings are going to be because that is such a wide array of different hazards they’re having to insure for. But the fire department rating does impact that.”

The best bet, Bailey said, is for business and industry owners to call their insurance carrier once the new rating goes into effect.

What the new rating comes down to, Clouston said, “There was a return on the investment the community made on the fire department over the years and the foundation was laid and it’s been built upon and upon.”

Scherer said, “It takes a lot of work and dedication for not only him (Patrick) but the rest of his department to have put in the number of hours needed to obtain this rating.”

Said Smith: “I think our fire department has done a great job. With the training these men have gone through and hours they put in and the dedication means a lot to the city and the city council.”