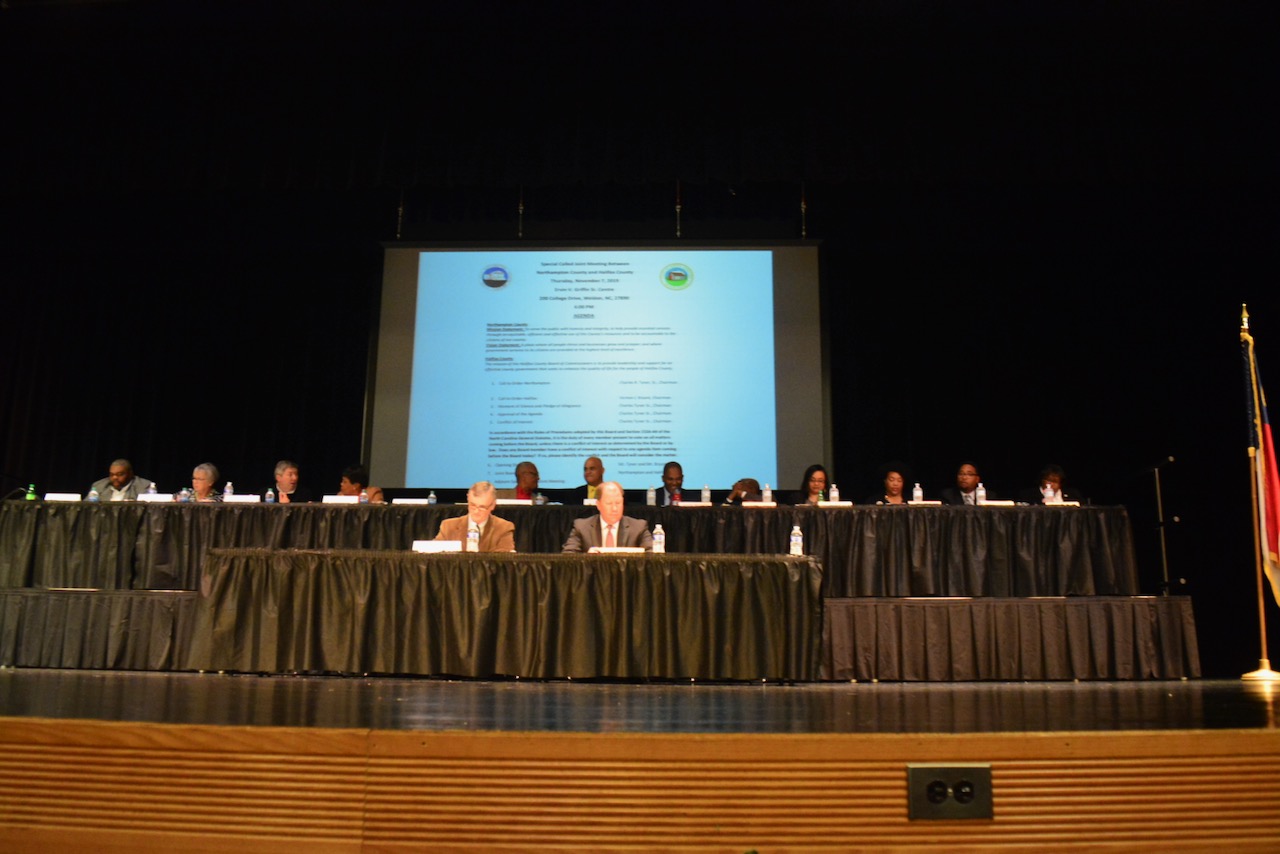 Odom prison was the first topic brought up during a joint meeting of the Halifax County and Northampton County boards of commissioners Thursday night at Halifax Community College.

Northampton board Chair Charles Tyner told his fellow commissioners, “For Northampton County, it was a tremendous hit for us. We asked (state Representative) Michael Wray what we could do and went to Raleigh about Odom.”

Tyner was referring to recent closure of the facility as a move by the state to move correctional officers to other prisons in the region, including Caledonia in Halifax County.

“We talked about letting Northampton have Odom, having the jail moved to Odom and why not make it a regional jail for Northampton, Hertford (and Halifax).”

Tyner said it is inevitable that Northampton will have to build a new jail in the years to come.

If a regional jail concept doesn’t work out, he said there are other programs for which Northampton could use Odom such as a juvenile rehabilitation center “right here in our own area. It depends on our sheriffs. I just thought that it would be an opportunity for us in Northampton County.”

Halifax County board Chair Vernon Bryant said while Odom is “on our radar,” the county has moved forward with putting its own jail expansion plans out for bids.

Halifax County Commissioner Rives Manning said while Odom is an option, it’s going to have to be rehabilitated and there remains the question of “who would inspect it. There’s a whole lot of things to look into.”

Bryant said after the meeting that everything is still on course following the board’s Monday meeting where commissioners approved sending the Halifax County jail expansion plans out for bids. He did confirm the county will talk to the state about Odom.

While he said it was not his decision to make, Halifax County Sheriff Wes Tripp did say afterward, “... As a taxpayer, I would be concerned with the many unknowns such as asbestos and lead paint and how much it would take to renovate and bring up to standards. If we entered into a regional concept we would have to share the contract.”

Tripp said he has been pleased with the cooperation from Northampton County Sheriff Jack Smith for housing Halifax County inmates in Jackson which “allows to reduce our overcrowding.”

Purpose of the joint meeting

Thursday’s meeting, which Tyner termed a historic event, was called because of the similarities the counties share. “It’s good to come together since we’re both Tier 1 counties and since we have the same issues and similar successes. We need to see what we can do to make our counties better. We can compete against each other and still love each other. We must share things together. This is a beginning.”

Bryant said towards the end of the meeting, “I want to challenge us to make this an annual thing.”

Halifax County Commissioner Linda Brewer said, “I realize that we are two separate counties but we are similar in more ways than we realize. This is a great step in collaboration.”

Tyner wanted to know about the status of a proposed Amtrak station in Weldon and what Northampton County could do to have the town restored to its glory days when it had a bustling depot. “We could come together to see what we can do that would help Northampton and Halifax.”

Bryant said the Amtrak proposal has huge support and should it become reality would benefit the entire east.

Halifax County Economic Development Director Cathy Scott said the town and county has built a strong case for the economic feasibility of the project.

The state Department of Transportation is “solidly behind the project,” she said.

Tyner replied: “We are in support. Let us know what you need to get to the finish line. Let’s make this a priority.”

Tyner said he was pleased with the cooperation the county has received from the Roanoke Rapids Sanitary District in treating wastewater. “If that didn’t happen, we wouldn’t have anyone in our industrial park. All the wastewater at Enviva goes to the Roanoke Rapids Sanitary District. We’re looking at other growth coming in that area. They have enough capacity for other industry coming to the industrial park.”

Northampton County Commissioner Nicole Boone said she is pleased with the partnerships formed with local schools and the community college in the form of early colleges. “We have to nourish that and encourage that. We need to let businesses know we have students willing to work.”