The Roanoke Rapids based 12U Lady Twisters travel softball team headed to Apex, NC this past weekend to play in the USSSA Winter World Series.

Having struggled in the past few tournaments the Ladies were looking to turn things around and pick up a Championship in their last tournament for the year and as a 12U team.

Unfortunately the Carolina Mudslingers were red hot and dominated the Lady Twisters in the first pool game on Saturday. The Twisters had no answer for the Mudslingers on offense or defense and they started the Tournament with a 14-0 loss. Suffering this huge loss in their first game was difficult, but exactly what the ladies needed to break out of their slump.

As the Ladies returned to action on a very cold Sunday, they met up against the Lady Phantoms once again. Kalissa Williams took to the mound for the Lady Twisters and continued her work retiring 15 of 19 batters, striking out five. Kaylee Collier led the Lady Twisters at the plate, going 2 for 2 with an RBI. While the ladies hit the ball well, they only managed to plate 3 runs in this contest, but with the stellar defense they were playing they held on to defeat the Phantoms 3-0 to move on to the Winter World Series Championship game.

Heading into the Championship game the ladies were ready to fight for the victory they hadn’t tasted in a few tournaments. They had fought their way back and wanted to prove to themselves that they could win the big game again. This game became a special event as the Lady Twisters bats were hot. Kamryn Dixon, Alexandria Richardson, Alayna Davis and Makaila Ricks all went 2 for 2. Makaila recorded 2 RBI’s along with Kenzie Stallings’ 2 RBI single and Kalissa Williams 2 RBI in the park Home Run. Logan Ross drove in a run with a double that was blasted into center field as the Lady Twisters scored eight runs in the Championship Game. However the true highlight of the Championship was the Perfect Game that Kalissa Williams pitched. She retired every batter she faced, a perfect 12 for 12, striking out 4. Her defense had her back, four of those batters were put out by Alayna Davis at second base. The stellar defense and the hot bats helped propel the Lady Twisters to an 8-0 Winter World Series Championship.

Coach Williams and Coach Davis would like to thank all the girls for all their hard work this long ball season. "These ladies won 2 tournaments this year and had quite a few 2nd place finishes," said Davis. The Coaches would also like to thank all the parents for helping get these wonderful young ladies to and from practices and tournaments, for helping fundraise, and for supporting the team on all the hot days and cold nights. 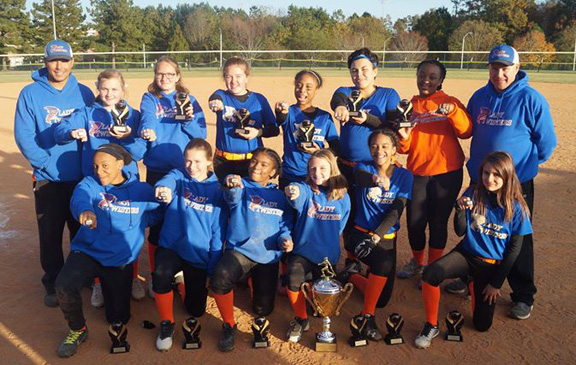