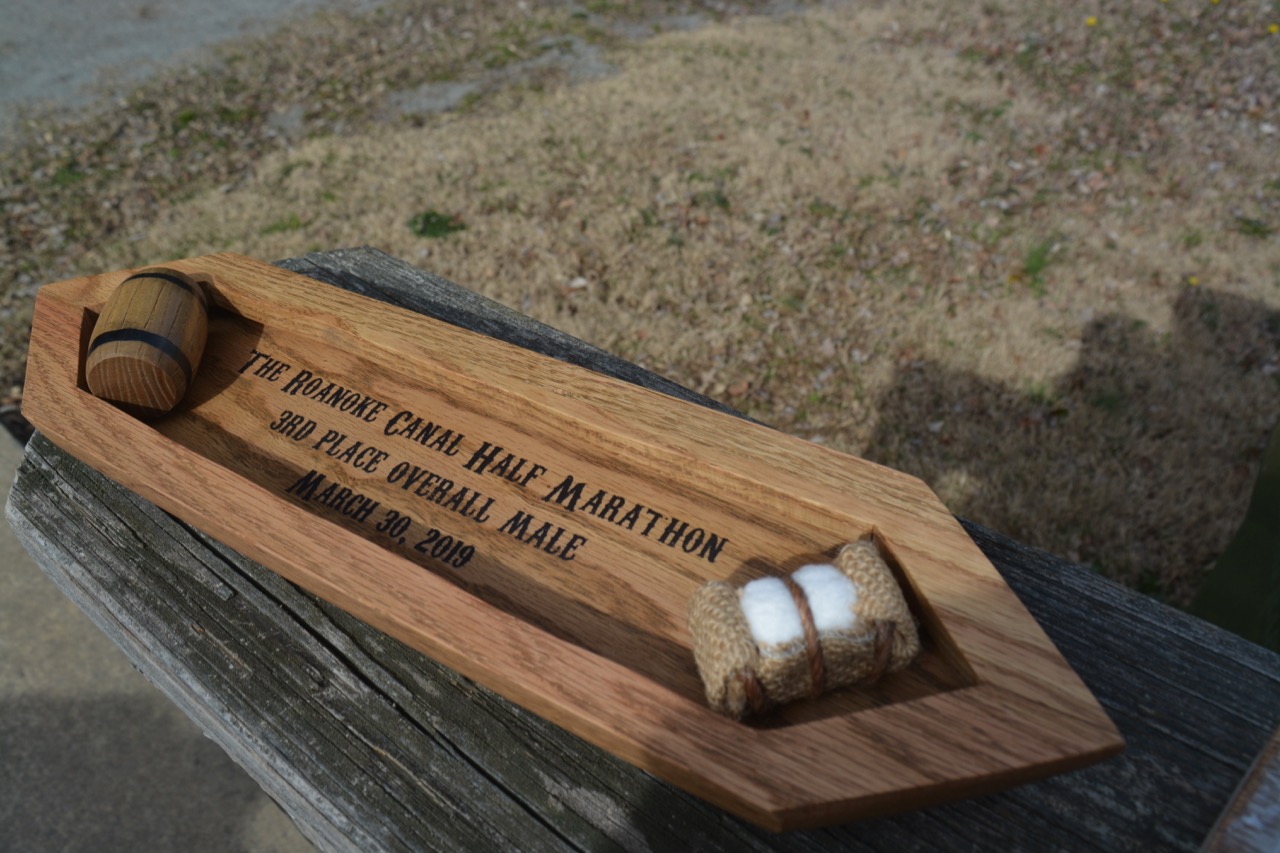 Trophies for the Roanoke Canal Half Marathon are being made one by one and will pay tribute to the role the waterway played in shipping goods to and from the Roanoke Valley.

There will be 60 handmade wooden plaques and six batteaux handed out at the end of the March 30 race.

The woodwork is being done by Canal Museum Cultural Resources Leader Ryan Newsome.

“I’ve done quite a bit of woodworking,” he said Friday. “It’s a hobby. I’ve never done the image transfers. I’ve seen it done on the internet.”

Through posts on the website Pinterest he learned the procedure. He cut the boards, did the sanding and staining for what will become the plaques and Assistant Parks and Recreation Director Kelly Manning did the white streaks to give them a more rustic feel.

(Registration can be completed online at this link. Registration the day of the race begins at 6 a.m. at the Roanoke Rapids Lake Park on Oakwood Avenue. The half marathon begins at 8 a.m. and the 8K begins at 8:30 a.m. Those wanting to assist with water stations or checkpoints are encouraged to call Newsome at the Canal Museum at 252-533-2847 extension 6. Runners who register before March 15 will receive a T-shirt)

Newsome said the 60 plaques have been cut and sanded and as of early Friday about half were stained.

This will be the first half marathon held under Newsome’s watch at the museum. “I started there after the last one. I requested to see if we could bring it back. My reasoning for wanting to bring it back was something like a half marathon has a lot of runners. It will give the museum and trail a lot wider audience.”

He believes the plaques and batteaux being awarded at the end of the race will be a draw. He recalls talking to one runner who ran a race along a railroad bed and the trophy was a rail spike

Manning made the cotton bales for the trophies while Newsome made the barrels. “When we first made the plaques we showed them around to the department. A lot of people were involved in making the final decision,” Newsome said.

About every good imaginable traversed up and down the canal, Newsome said. “The roads weren’t good.”

Farmers and merchants relied heavily on the canal to ship and receive goods for some 30 years until the railroads came along in the 1850s and made the canal obsolete.

As of Friday 26 had signed up for the race. “Right now interest is there,” Newsome said. “We have several from out of state (signed up).”