Fourth armed robbery since Jan. 13 occurs at Store Next Door

Roanoke Rapids police are investigating an armed robbery which occurred at The Store Next Door on West Fifth Street around 9 p.m. Sunday.

This is the fourth armed robbery to occur in the Roanoke Valley since January 13.

Roanoke Rapids police Chief Bobby Martin said this morning he could not say for sure whether the Sunday robbery is related to the others currently under investigation. “We are collectively sharing information with each other in regards to these crimes,” Martin said, referring to working with the sheriff’s office. 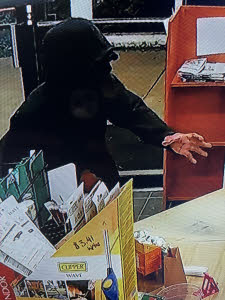 In the Sunday robbery a suspect came into the store and demanded money, threatening the clerk they would be shot in the face if they didn’t hurry.

The clerk complied and the suspect left the store. The suspect, who was dressed in dark clothing and brandished a dark object believed to be a weapon, was last seen heading west.

The sheriff’s office said last week based on the way the suspects were dressed as seen in limited video footage, the type of businesses robbed and the times in which they were robbed, investigators are treating the crimes as related.

The January 13 robbery occurred around 9:30 p.m. at the Dollar General located on Silvertown Road in Enfield.

During the robbery a person described as a slim Black male dressed in all black with his face hidden by a coat hood entered the store and used a dark handgun to rob the employee working.

The second armed robbery occurred January 14 around 9:30 p.m. at the Subway located on West Tenth Street in Roanoke Rapids.

A person described as a slim black male who stood around 6-feet tall entered the business dressed in all black with his face hidden by a coat. He used a dark-colored handgun to rob the employees working.

The third armed robbery occurred on Wednesday around 8:45 p.m. at the Family Dollar on Highway 48 in Roanoke Rapids.

Anyone with information on The Store Next Door robbery is encouraged to contact the police department at 252-533-2810.

Anyone with information on the first three robberies is encouraged to contact HCSO Detective Sergeant J. Pignanello at 252-583-8201.