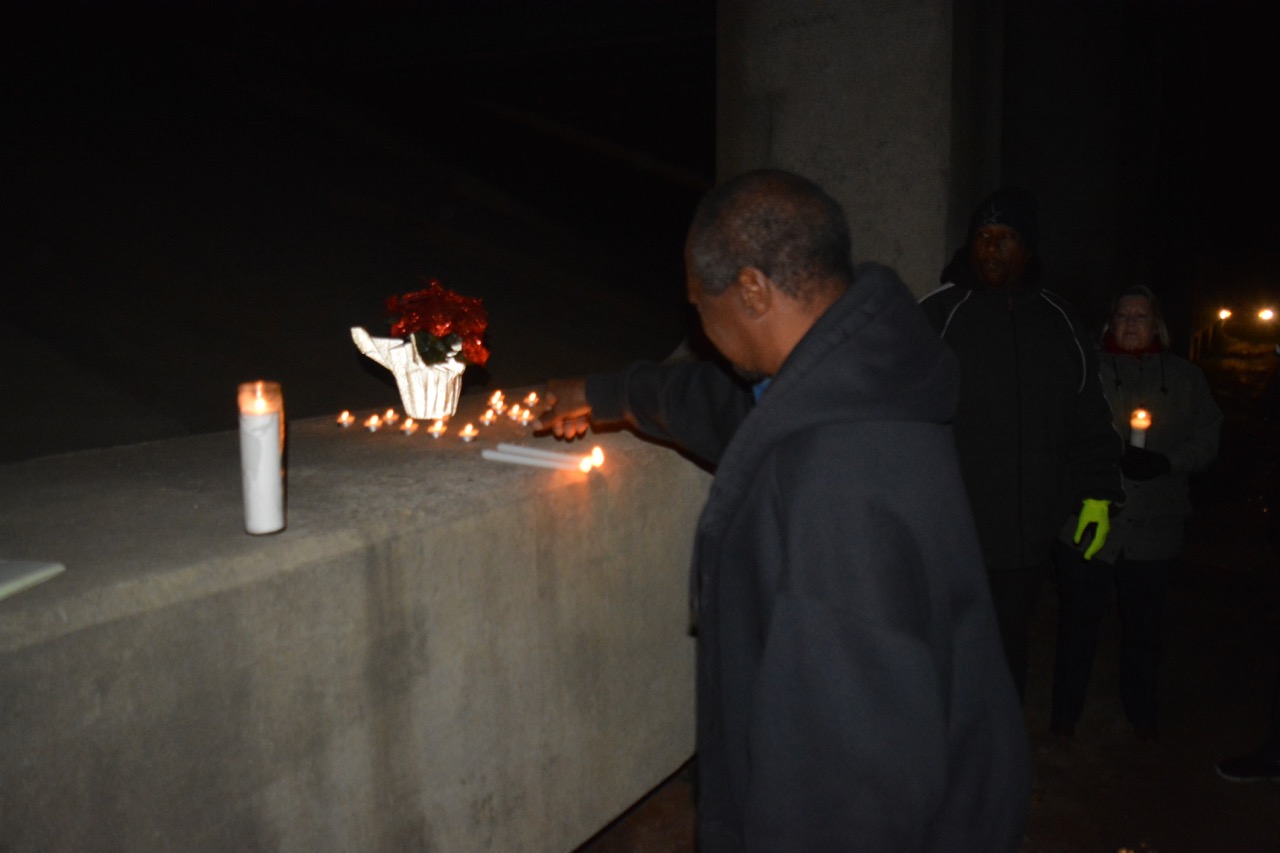 An outpouring under the bridge: Murphy remembered at vigil

It was a gathering of love, a vigil attended by people who either gave Edward Lee Murphy food or passed by him in their daily treks through Becker Drive Extension to and from work.

A spot underneath the Interstate 95 overpass was the 55-year-old Murphy’s home for years and on Thursday evening candles were lit in honor of his death last week.

“We were the ones who actually found him,” said Travis Carter of himself and Kennametal coworkers Bumpy Gordon and Justin Luce. “We called help for him. We saw him laying up there and turned around to give him some help. We could tell he was bad off so they called the ambulance.”

Carter has been working for Kennametal for about eight years and would see Murphy daily. In those trips to work the men would sometimes give Murphy shoes or other items they thought he might need.

When the coworkers saw Murphy last month they knew something was wrong. “When I asked him if he was OK he just picked his arm up and dropped it. He didn’t say nothing. We knew he was bad off and needed to get him some help.”

Keith Gillis had the opportunity to provide Murphy with two Thanksgiving meals. “He’s been a part of us ever since.”

Gillis said news Murphy had to be hospitalized was heartbreaking. “He was the type of person who never bothered anyone and stayed to himself. When we came down and fed him that day we couldn’t believe that he talked to us.”

Even though Gillis and Lakima Brickell had built a relationship with Murphy, the story of how he came to Roanoke Rapids was never discussed. “He never talked about where he was from or if he had family or anything like that.”

Gillis said he wanted to be at memorial because, “I felt like we had a bond with him. It’s not going to be a funeral or anything so I felt at least we could honor him by at least being here and at least thinking about him.”

He said Murphy was always closed-mouth about his situation. “You could ask him but he would always divert the conversation to something else.”

Gillis said the vigil showed Murphy knew “he had people who cared about him,” and “the community had love for him.”

Wayne Powell said he would see Murphy on his way to work at Halifax Community College. “I used to bring him food every now and then.”

He said the vigil shows, “You never know who loves you. You may not think people care about you but more people are just going to miss him under the bridge.”

What Roanoke Rapids police Chief Chuck Hasty told those paying respect to Murphy was that he learned the man had a history of homelessness and mental health issues dating back to when he was in the Greensboro-High Point area. His family had lost track of him.

Murphy, Hasty said, had probably been homeless for at least the last 15 years.

“The family is appreciative of what the community has done. His brother works two jobs to make ends meet. They just lost touch and didn’t know where he was at.”

Hasty said he was appreciative of Greater Joy North Church helping with the vigil and a community outpouring which led to funds being raised for Murphy’s cremation. Enough funds were raised so the remainder will be donated to Union Mission.

In response to a question from one of the attendees about police checking on and trying to help the homeless, the police chief said, “We’re a small town. Everybody takes care of each other.”

As far as the attendance, Hasty said, “It shows he was cared about and wasn’t alone in the world.”
Powell, who is a member of Solid Rock Masonic Lodge 77, said he wants to adopt Becker Drive Extension in Murphy’s honor. Hasty said he would make inquiries with the state Department of Transportation.

Captain Bobby Martin of the police department watched the lighting of candles in Murphy’s honor. “It just goes to show what kind of citizens we have in the community.”