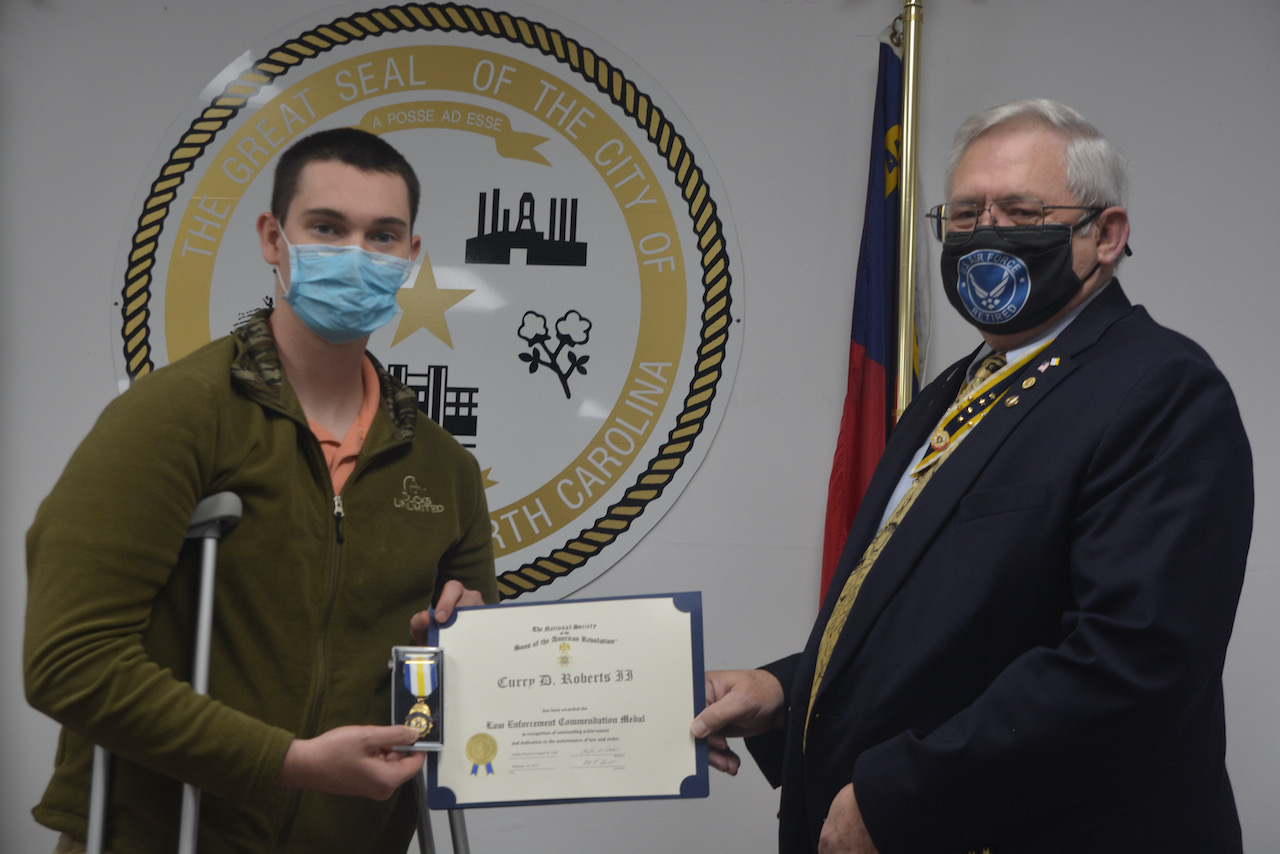 The thorough investigative work of a Roanoke Rapids police officer who made a traffic stop in January which led to his discovery of a body in the trunk earned him the Law Enforcement Commendation Medal from the Halifax Resolves Chapter of the Sons of the American Revolution today.

Ken Wilson, a member of the chapter, presented the medal to Officer Curry Roberts II.

On January 18 Roberts conducted a traffic stop for a vehicle speeding in the area of Highway 158 and Georgia Avenue.

This stop led to the discovery of Trevon Fields, who had been shot and killed on Dickens Avenue.

“The proactiveness of Officer Curry Roberts helped the Halifax County Sheriff’s Office potentially solve a murder they would not have been aware of,” Wilson said in a brief presentation this afternoon at city hall. “Officer Roberts’ instincts and professionalism ultimately helped capture four subjects that potentially had involvement in the death of Trevon Fields. This traffic stop also yielded four handguns that would have remained on the streets illegally.”

Said Wilson: “We should all be thankful that we have officers of this caliber protecting us as we go about our daily lives.”
Roberts said he was appreciative of the honor bestowed upon him by the SAR. He said he was also appreciative of Sergeant Ryan Cross assisting him as he conducted a search of the vehicle.

While the officer wasn’t at liberty to say what led him to the trunk of the vehicle, Chief Bobby Martin said at the time what led to the search of the vehicle and the discovery of the body of Fields, 23, was that marijuana was found in the vehicle. Officers also found weapons in the vehicle.

Roberts’ thorough investigation of the matter, Martin said after the officer was presented the medal, most likely helped lead to charges against four people in a shooting death that authorities might not have immediately known occurred.

Roberts made the stop after the driver of the vehicle was reportedly traveling well in excess of the posted 45 miles per hour speed limit.

Arrested and charged with murder in the case are Ralik Robinson, 22, Trevathann Myquan Shearin, 20, Shantron Avondre Person, 20, who are all from the Roanoke Rapids area, and Deluntae Jaeqon Squire, 23, of Halifax.

The charges against the four from Roanoke Rapids include counts against Person for concealment of death, carrying a concealed weapon and speeding 57 in a 45 zone.