Weldon PD roundup: One served, one sought in August heist

The Weldon Police Department reported the following, according to Sergeant T. Mason:

On August 8 shortly after 9:30 a.m. Mason responded to Interstate Tobaccos on an armed robbery call.

The victim advised him two men entered the business, locked the door and pulled guns on him.

An undisclosed amount of cash was taken from the business and the victim who was working at the time of the robbery.

Jenkins was served warrants on September 30 in the Halifax County Detention Center for two counts of robbery with a dangerous weapon; two counts of felony larceny; false imprisonment; assault with a deadly weapon; and possession of a firearm by a convicted felon.

He received a $1 million secured bond for the charges and has a November 4 court date.

Lewter has not been located and faces the same charges as Jenkins with the exception of the possession of a firearm by a convicted felon count.

Lewter, who is shown in the first gallery photo, may have short braids at this time and is believed to possibly still be in the Roanoke Rapids area.

Saturday shortly before 6:45 p.m. Officer M. DiPietro responded to a stolen vehicle call in the 200 block of East Second Street.

The vehicle was in this area and had been stolen from Northampton County. 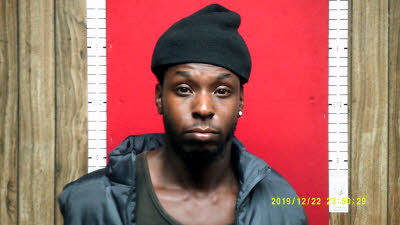 The officer saw a man identified as Daequan Marquis Everette, 26, of Roanoke Rapids sitting in the vehicle.

DiPietro verified the vehicle had been reported stolen and placed Everette under arrest and took him before a magistrate.

He was charged with possession of a stolen motor vehicle.