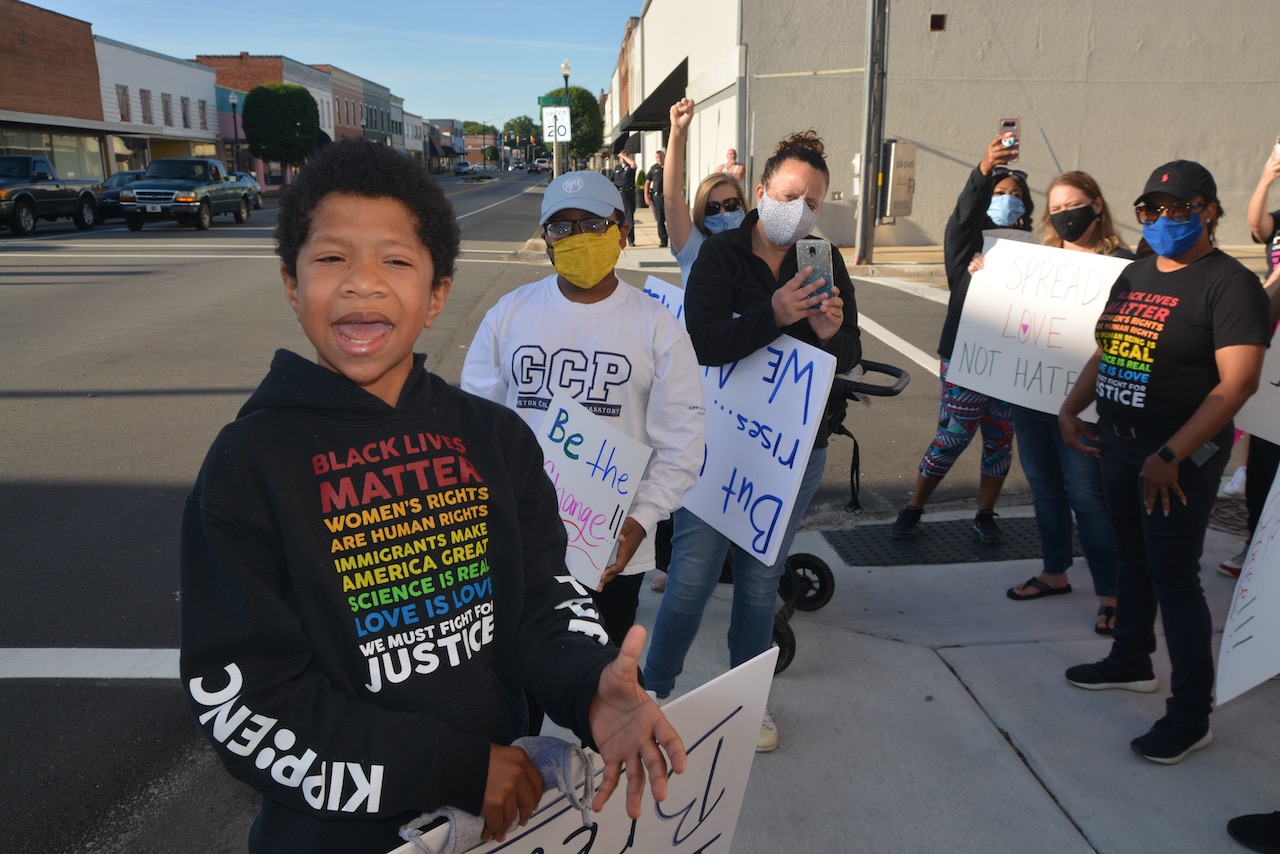 From the avenue, protesters deliver a message of solidarityFeatured

From the intersection of Eleventh Street and Roanoke Avenue Monday evening, people stood with signs as many  cars and trucks passed by, some honking horns, some waving and some driving by without reaction.

It was a way to remember the life of George Floyd, who lost his life to a Minneapolis police officer who pressed his knees on the man’s neck last week.

The Minneapolis Star Tribune reported this morning two autopsies — one requested by Floyd’s family and the other from the Hennepin County Medical Examiner — both agree his death was homicide but disagree over what killed him.

The private autopsy says asphyxia while the county autopsy said he died as a result of cardiopulmonary arrest complicating law enforcement subdual, restraint, and neck compression.

For those attending the protest Monday night in Roanoke Rapids, the 46-year-old man’s death should serve as a wakeup call, they believed.

“We all know this country has been in turmoil,” said Katie Ammann of the Music School of Roanoke Rapids, where the majority assembled with their signs. “We want to bring light to a negative situation. We want to bring hope to people who need it and we want to spread love.”

Captain Chuck Hasty of the Enfield Police Department attended the event. “We’re here to support a cause. There was wrong done. Justice needs to be done. There’s a lot more good cops than there are bad cops.”

Hasty has seen the video of the Minneapolis police officer with his knees on Floyd’s neck. “It was wrong. You could see the life going out of Mr. Floyd. There’s no training academy that teaches us to put our knee on anybody’s neck. Almost 30 years I’ve never been trained to do that to anybody.”

Vernon Bryant, a retired probation officer who serves as chair of the Halifax County Board of Commissioners, agreed. “I went through that training — not to the extent of law enforcement. You were never taught to do that.”

Bryant said the matter in Minnesota was wrong. “People are tired of being tired. We’re much better. The United States is much better than this. That’s not us. What happened in Minneapolis that’s not representative of the vast majority of police officers who do their jobs and do it extremely well. You’ve got to weed the small minority like that out.”

Roanoke Rapids police Chief Bobby Martin, back on the job Monday after District Attorney Valerie Asbell last week said no charges would be filed against him in a case from December in which he fired a non-fatal shot at a man reportedly trying to run him down in a vehicle, attended the rally.

Of the Floyd case, he said, “I absolutely denounce the way he lost his life. It was uncalled for and unnecessary. We’re better than what’s going on now because the folks that are peacefully protesting are being overrun by those that want to cause problems and tear things up. It takes away from what this is all about because there’s so much more meaning.”

Martin said, “Mr. Floyd’s death unfortunately has shown that there are people out there that are still using excessive force in the law enforcement world. It’s not right and we’re not going to stand for it.”

Like Hasty and Bryant, Martin said, “I have never been taught to put my knee on the back of an individual’s neck that is resisting me, that is under arrest. I have no idea why he felt the need to do that because that is not in our training.”

Shawanda Witherspoon, who with Ammann organized the event, told those assembled, “We’re here to spread solidarity for a better tomorrow. We are a hopeful people and we speak for lasting change.”

Said Ammann to the protesters: “We’re here to show the community until black lives matter there’s no way to say all lives do.”

Witherspoon told those assembled to stand on the corner and simply let their voices be heard. “We want our voices to be heard in this community because black lives matter.”

Ammann said, “We are here for each other whether people passing by are kind to us for the message or not.”

Lee said, “We understand we all matter, that black lives really do matter. That’s what they’re really going to be afraid of. It’s time we rise up as one community saying no more. We can’t sit back any longer, we can’t stay silent any longer. If we do then they will win. We cannot give them this victory. Even if we may win or lose one battle there is still a war to be won. Right now is the time to win that war. We got freed in 1855 but I promise you right now that this is our slavery.”

Said Lee: “It’s time that we rise up right now. Show them we are a community that will no longer be silenced.”