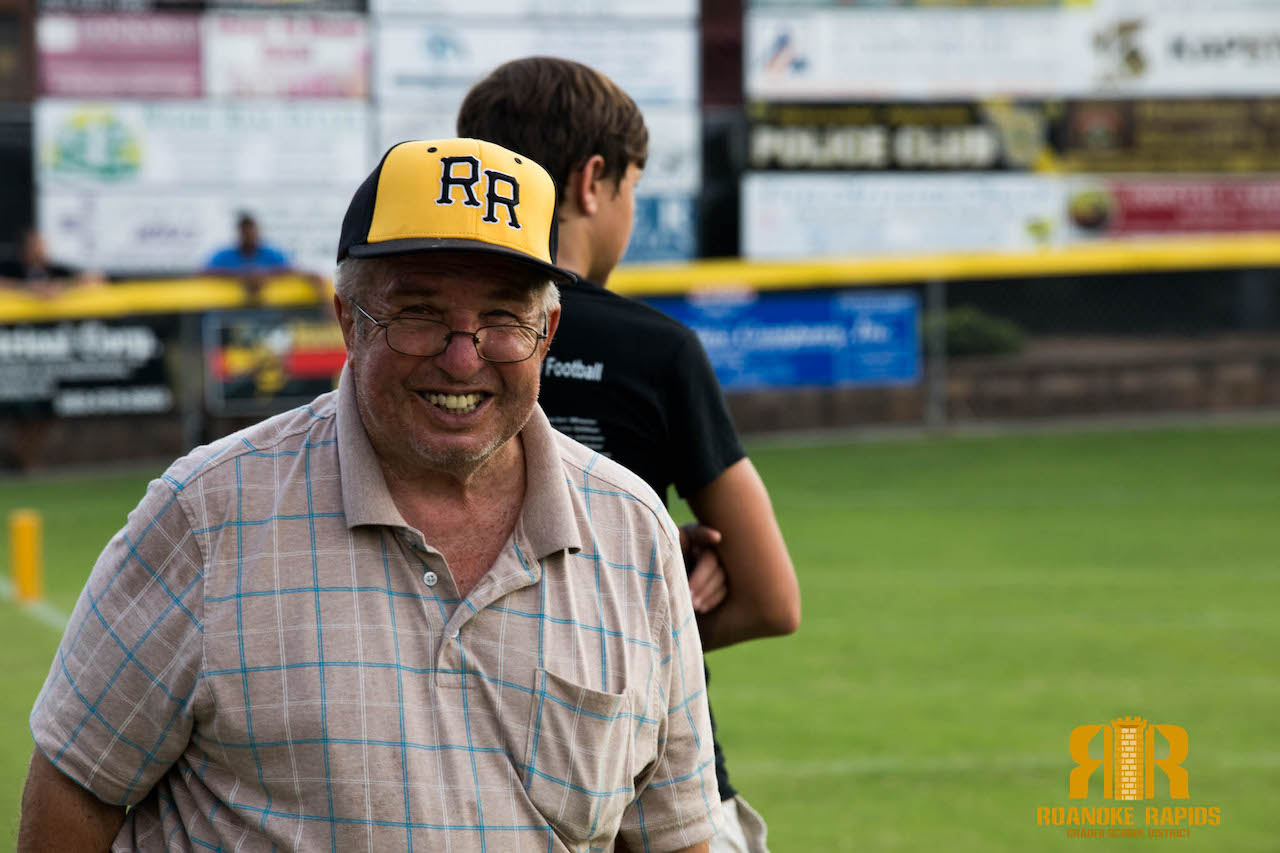 The definition of loyalty, ZZ succumbs

In a word loyalty.

“The definition of loyalty should have a picture of Mike Stainback,” said Dave Buck, a former Chaloner middle and Roanoke Rapids High School football coach of the longtime school booster affectionately called ZZ.

Stainback died Sunday at Pennybyrn in High Point, according to his minister, Reverend Joe Sandoval of First Presbyterian Church in Roanoke Rapids.

Buck said, “He treated people very nice. He had his ways, his proclamations about ‘steak and baked potatoes at Coach Nelson’s house,’ but you cannot use the word loyalty without the name Stainback. He was loyal to Roanoke Rapids High School.”

On the day Buck brought him the items, “He was about to cry because the gesture meant so much to him. He was a legend.”

In a statement on the Roanoke Rapids Graded School District Facebook page Sunday, the system said, “Our hearts are heavy tonight as we’ve learned of the death of one of our biggest Yellow Jacket fans, Mike “ZZ” Stainback. He touched many lives and made our days brighter with his visits. Stainback was part of RRHS athletics for more than 50 years. Surely an empty spot on our fields that will never be replaced.”

In March of this year Stainback was left in critical condition after he was struck by a vehicle while riding his bicycle at Ninth Street and Roanoke Avenue.

Sandoval became close to Stainback when the minister came to Roanoke Rapids in 2010. “He was a member of the church. When I first came to Roanoke Rapids I was introduced to Mike. The first day it was explained to me that he was going to be my assistant. He folded bulletins, rolled the cans to the street. He would just help out in a lot of different ways.”

Always seen riding his bike around the city, Sandoval said, “Our church was part of his circuit. He would visit a florist, visit Tom Wellman at his law office and he would be at Rosemary United Methodist Church.”

The previous minister of First Presbyterian told Sandoval “to keep Mike busy. It very quickly fell into a routine. He would always sit down and chat with me. He became a very, very good friend. It was a very special relationship we had.”

Just how special the relationship was became evident when the pastor was told how much he meant to Stainback. “‘He just though the world of you.’ That’s the shame of it, you don’t understand how important you are to them until they’ve passed.”

Sandoval saw growth in Stainback. “He would look for things he could do to help me and help the church. It showed he was invested in the church and me. He would say (to people), ‘this is my bossman.’ His genuineness and sincerity, it just makes you want to be a better person.”

There was a compassionate side to Stainback, Sandoval said. “He would talk about how he missed his dad. It was really hard for him. It kind of scared him. He knew his mom was sick. His brother made sure the bills got paid. It became apparent his dad took care of him financially and he achieved a level of peace where he would try to provide for his mom in meager but helpful ways. He would make sure we would come and sing Christmas carols to his mom.”

In the months following the collision, Sandoval said Stainback received excellent care. “He had been in an acute care hospital for two months and was getting stronger to the point he didn’t need to be there anymore.”

At Pennybyrn, “They took excellent care of him. He was showing very slow, but incremental improvement.”

Plans for a memorial service are still being worked out, the pastor said.

RRGSD Superintendent Dain Butler said, “I met Mike in the parking lot of central services my first day on the job. I knew right away he was a kind and innocent soul that felt safe at the Roanoke Rapids Graded School District.

“Mike aimed to please and would follow me through the building to talk about the football team. Although I knew him for a much shorter amount of time than most, he trusted me and I trusted him. Mike was loved across the town. He will be greatly missed but the laughs and conversations will last a lifetime.”