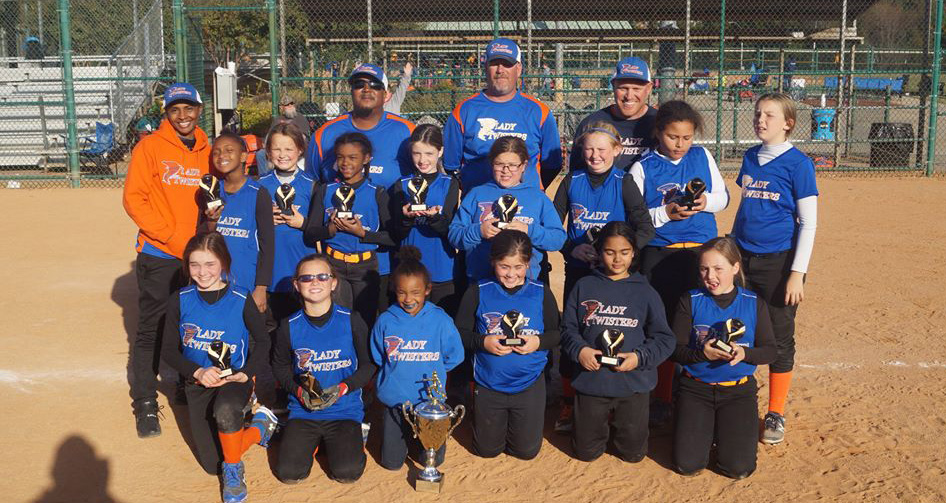 The Roanoke Rapids based 10U "08" Lady Twisters travel softball team headed to The 2018 Winter World Series in Apex, NC, with their eyes set on World Championship rings this past weekend, but came up short finishing second.

In the first pool game, The Lady Twisters took on the Crystal Coastal Riptides and lost 12-5.  In the second pool game the Lady Twisters faced County Heat and jumped out to a 4 point lead in the 1st inning. After several lead changes the Twisters and the Heat end in a tie 6-6.

The Twisters placed the number two seed for the bracket play and would play the Cleveland Angels and take their second lost 13-5 on the day moving them to the losers bracket on Sunday.

The Lady Twisters unfortunately would have to return early Sunday morning for a cold 8:30am start.  This time Twisters would prove to be fire hot. Swinging there way with two  runs in the first inning and a whopping 7 runs in the 2nd inning, leading them to a 9-2 victory.

With that win, The Lady Twisters would advance for the chance to get their much needed revenge on the Cleveland Angels. The Lady Twisters kept the bats going, scoring four runs in the first inning and a great defensive performance, holding the Angels to 0 in the first 2 innings.  In a nail biter, the Twisters fought their way to a 8-7 victory advancing to the championship.

The girls had fought their way back to be in the championship game and had their eyes on the prize against the Riptides. The Twisters would continue with the duo of the past two games with Payton Odom on the mound and Emily Clay behind the plate. This game would hold up to be what championship 's are meant to be, in a very close competitive one to the end. Coming down to the wire the Riptides were the home team at bat up 5-4 with only 4 minutes left in the game.  The Twisters fought hard on defense but time would not be on their side to try one more rally for runs. The game timed out with a 5-4 lost earning Twisters a 2nd place finish.

Coach James Odom said, playing in their first ring tournament, he was hoping his girls would win it all to get the bling, but he and his coaching staff, (Coach Neal Campbell, Coach Monica Davis and Coach Jeffrey Shaw) were  so proud of the season they had this year, with a 1st place win and multiple 2nd place victories. What a way to end the season, bringing home some hardware. Also, want to to thank the parents, grand parents and sponsors  for all the support and donations/ fundraisers so the girls can play the game they love.

Defensively there were many outstanding plays, leading the way were Payton Odom and Emily Clay with four and a half games combined pitching and catching.