The late coach Mike Newsome, who devoted so much of himself to the youth of the Roanoke Valley for nearly 50 years as a coach passed away January 16th 2015 at the age of 67. Friends came together to form "Team Mike" and find ways to honor the late coach Newsome and keep his memories alive.

So in 2016 it was decided to award a scholarship in his name to three area senior athlete students from high schools where coach Newsome coached.

"Team Mike" organizer Randy Wrenn stated, "This scholarship award is just another way to honor the Late coach and also honor several senior athletes and schools Mike was part of for years. Coach was always willing to give his time to the kids in the Roanoke Valley. I guess that is part of where I get my drive, because all of the Roanoke Valley kids need to have fun and smile. Thanks to all that helped this year in the fundraisers for "Team Mike", with a special thanks to supporters in every event (Davis Body Shop, Lynch's Signs and Graphics, RRspin .com Sports).

Coach Newsome's widow Jeane sent her congratulations to Tara Simmons and stated "Mike would be so happy to see this. He loved all of "his girls". 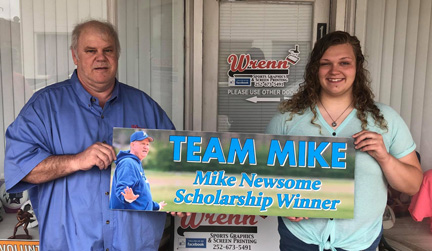 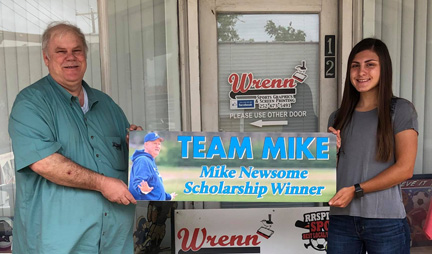