Roanoke Rapids City Council will include pedestrian improvements and a request for solutions to ease traffic congestion at Premier Boulevard and Fourth Avenue to its legislative goals for this year.

City Manager Kelly Traynham told the council at its Tuesday work session Highway 158 at Premier Boulevard needs pedestrian improvements. “There’s been two fatalities there of pedestrians trying to cross the lanes of traffic. It is a state-maintained highway and we would like to see the intersection improved to reduce that risk.”

She said improvements are also needed at Premier Boulevard and Fourth Avenue where she said she witnessed logjams for motorists attempting to enter Chick-fil-A and Starbucks during the holiday week. “We’re thankful that we have Chick-fil-A and Starbucks and other popular destinations for travelers. There are engineering principles that have to be followed but we would like to try to pursue and bring attention there.”

The state would have the ultimate authority on how to proceed with any improvements at Highway 158 and Premier Boulevard, she said.

Councilman Wayne Smith asked about the possibility of a traffic light at Fourth Avenue and also suggested including police Chief Bobby Martin in the discussions.

“We will be glad to include Chief Martin in our upcoming meetings,” Traynham said, but advised, “The city cannot just go and install it ourselves. We want the state to take a greater role in addressing the transportation impacts there. When the plans were made I don’t think they really had in mind that those two popular destinations would be at that specific location.”

Councilman Carl Ferebee said the 158-Premier Boulevard intersection is one that is discussed often. “I kind of agree with Kelly in light of what happened at the crossing not long ago.”

He said he believes that some type of crossing light in which a button could be pushed would help. “I see people walking from the hotels to eatery type places. They almost have to walk in the street. This might be a good opportunity to use some money to help get that done. The police chief would definitely have a great impact and would tend to give some good ideas on that.”

The existing businesses and those which will be located on Premier Boulevard are going to create sales taxes and jobs, Mayor Emery Doughtie said. “I’m thinking since it is economic development, maybe we could look to our legislators and get some favorable attention from the DOT (North Carolina Department of Transportation).”

Smith said he believed the city manager and the council were going about the matter in the right way by getting county economic development involved. “I think some discussion with the police chief might be advisable. I know how the traffic is especially if you go to Starbucks and Chick-fil-A is a madhouse out there sometimes. I think you’re going about it the right way. If we continue down that path I think it would be a good path to go down.”

Traynham also suggested an amendment to an existing legislative goal regarding housing. 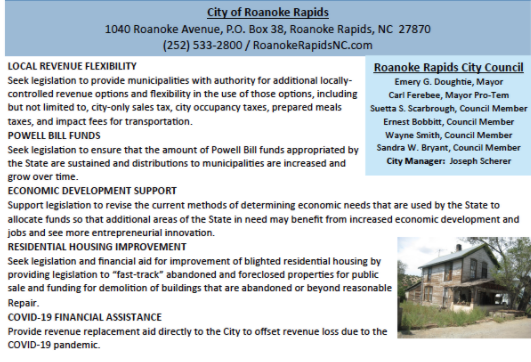 ​​As currently written, the goal regarding housing is to seek legislation or financial aid for the improvement of blighted residential housing by providing legislation to fast-track abandoned and foreclosed properties for public sale and funding for demolition of buildings that are abandoned or beyond reasonable repair.

“We all know too that the housing situation is vital to us in recruiting people to our community,” Doughtie said. “A lot of times people find jobs but they may not find suitable housing. I really think if we put things in priority that needs to be placed pretty much at the top.”

Traynham said she would like to see the city seek legislation that would provide for different incentives and encourage affordable housing in rural cities like Roanoke Rapids. “I would like to see priority given to our area. If the state could give financial incentives or tax credits that would really increase the potential for it.”