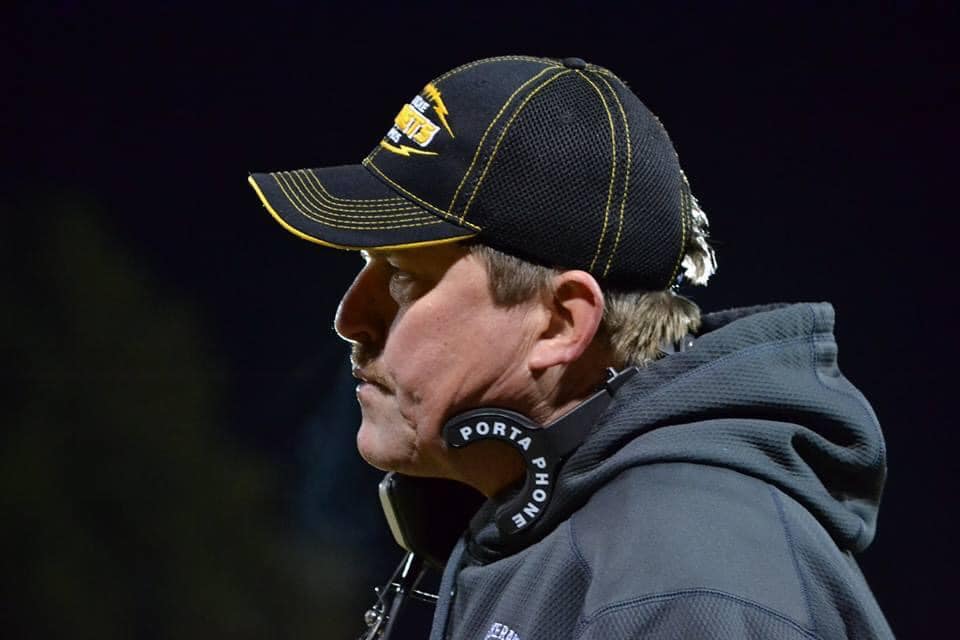 McDaniels was a native of Elizabeth City and the youngest of six brothers. He is the father of Jake McDaniels and Jordan McDaniels Williams.

McDaniels had over 29 years experience as an educator and coach — 12 of those years he served as an athletic director.

McDaniels was named Roanoke Rapids head football coach in 2014 and continued in that position through the 2019 season.

Clifton “Eric” McDaniels, age 60, of Elizabeth City, NC died Wednesday, May 19, 2021 at his home. Born in Pasquotank County, NC on January 28, 1961 to the late Thomas Lee “Tom” McDaniels and Aileen Creech McDaniels, Eric has touched the lives of many young people in this area for a great many years. After graduating from Northeastern High School, he chose to further his education at Chowan College where he played football and baseball. He then transferred to Atlantic Christian College where he played baseball. He completed his education at Elizabeth City State University earning a Bachelor of Science in Health/Physical Education. Eric had over twenty-six years of experience as an Educator and Coach. He served as head coach at Northeastern High School for a sixteen-year stint, was the offensive coordinator and quarterback coach for the Edenton Aces, and was the athletic director at Roanoke Rapids High School. He was a member of Corinth Baptist Church.

He is survived by his children, Jake McDaniels and Jordan McDaniels Williams and their mother, Shelly; his brothers, Bill McDaniels, Bob (Jenny) McDaniels, Mark (Laura) McDaniels, and Woody (Lauri) McDaniels; a grandson, Jameson “J.D.” Williams; and many nieces and nephews. He was predeceased by a brother, Steve McDaniels; a niece, Michelle McDaniels Carver; and a great-niece, Aaliyah Marie McClease.

A funeral service will be held at 11:00 a.m. on Monday, May 24, 2021 at Corinth Baptist Church with the Rev. Chad Thomas and Elder Jesse C. Purkett officiating. The family will greet visitors immediately following the service at the church. A visitation will be held on Sunday from 4:00 – 6:00 p.m. at Twiford Memorial Chapel. Burial will be in West Lawn Memorial Park Cemetery. Twiford Memorial Chapel, 405 E. Church St., Elizabeth City, NC is serving the McDaniels family. You may express condolences to the family by visiting www.TwifordFH.com.

To plant a tree in memory of Eric McDaniels or send flowers to the family, please visit https://www.twifordfh.com/send-flowers/.