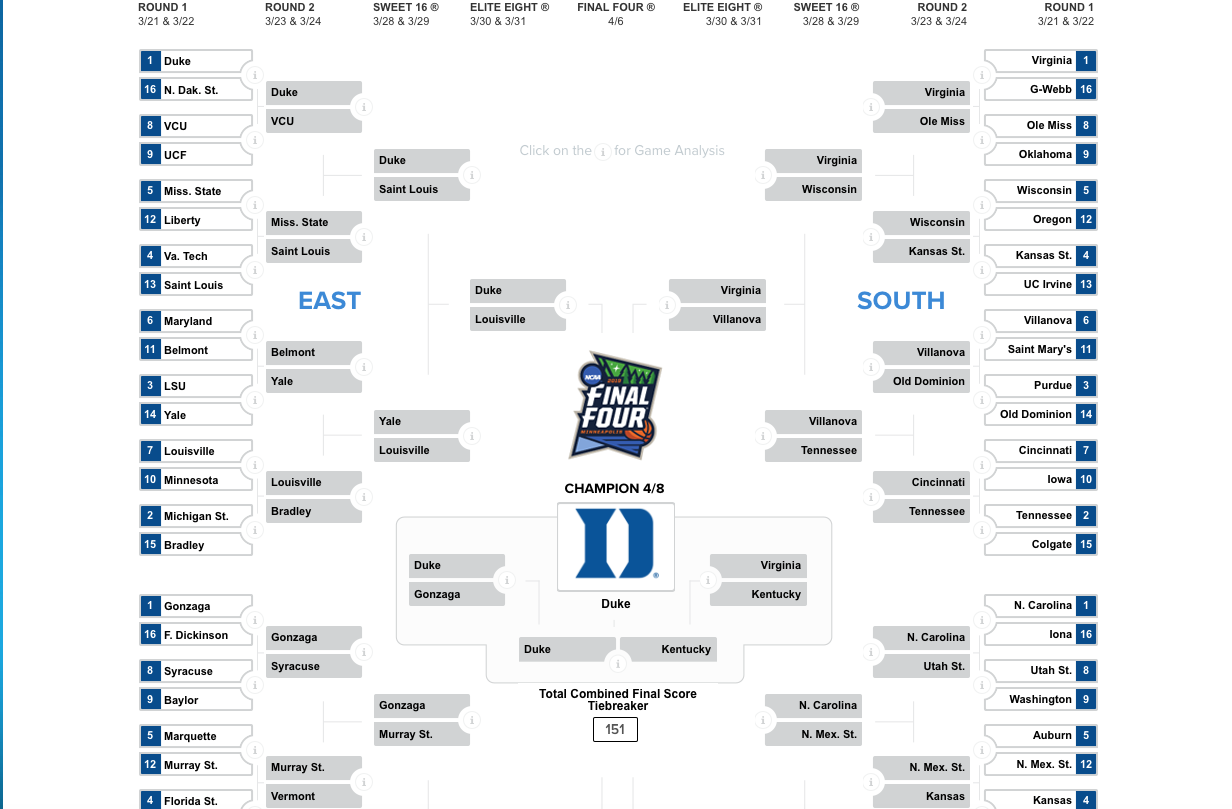 The absurdity of college basketball loyalties

We find the basketball obsession in North Carolina kind of absurd.

While we’re North Carolina born and bred ourselves and enjoy this time of year called March Madness, we’re not sure what gets folks so riled up over one college team or another which sparks smack talk across social media and makes you don the shirts and hats of your favorite team despite never setting foot in a classroom of the college or university of your sports — namely basketball — choosing.

Might as well launch a dart at a random circle of college logos and whichever the dart hits there you go.

Someone explained to us, someone who ain’t originally from these parts, that you kind of feel pressured to form an alliance.

We still don’t get it and honestly we don’t remember a single time a teacher wheeled a TV on a cart into the classroom so we could watch the ACC Tournament. We took our book learnin’ serious in the Hertford County School System and didn’t have time to squander on such foolishness (cough, cough, wink, wink).

It’s kind of like that post on social media that I grew up in such and such a bucolic place where we left the doors to our house open and were lucky thieves didn’t clean our house out, drank from a water hose although the brass fitting or type of hose could make the water taste weird, caught lightnin’ bugs in Mason jars, forgot about them and killed them and never pined for the latest technology — although you can’t tell us you weren’t all agog for Pong, that Mattel handheld football game or the other nifty gadgets which predated the advent of the cellular mobile telephone. Space Invaders and Galaga? How cool was that?

No one has really answered the question on why you become so fervent over a college you never attended. Some folks go as far as to tattoo themselves with that college logo although they never took a single class, sent in an application, walked the hallowed courtyards, entered the ivy-covered pantheons of learning or just drove by the campus and screamed, “I love you college of my choosing, but only for your sports program and only for your sports program which is basketball and only because your sports program basketball team has won a certain number of national titles which gives them more chances of winning future national titles so I can be even more fervent and obnoxious when college basketball season rolls around.”

Yes, we get it, no one likes losers. You like winners, except for the New England Patriots but that’s football not basketball and it’s pro not college.

Explain it to us. Yeah, we half-heartedly pull for N.C. State because we did apply and were accepted there. But we don’t get all teary-eyed and blame the bad things that happen to the Pack on the officials or make fun of players whose sneakers blow out on the court and leave them injured.

We just kind of go through the motions, feign fandom of Carolina when rabid Carolina fans will bite your head off for rooting against them and wink at our friends who know what we’re doing and why. It’s fun!

This is partially our fault for attending a college which didn’t have intercollegiate sports. We would hightail it to downtown Chattanooga and cheer for the University of Tennessee at Chattanooga Mocs.

That’s why you’ll see us sometimes sporting a UTC sweatshirt and we did take several classes there to fulfill our degree requirements, plus the shipping and handling of a sweatshirt from our alma mater would cost as much as the garment itself so there’s that.

But yeah, we suppose we have some right to enjoy the March Madness although we really have no vested interest in any of the teams playing. We admit the St. Louis mascot is cool, we have a fondness for Yale and we are really missing Davidson this year.

Just because we don’t get it and haven’t succumbed to claiming any one allegiance for a school we didn’t attend doesn’t mean you shouldn’t continue your rabid and fervent loyalty to your chosen school based on the number of national titles won or that many of you believe God’s favorite color is powder blue.

Keep on keeping on and if you find a chance wanting to explain yourself, please do. We don’t have a dog in the fight and enjoy watching your anger fester to a boiling point on your internet social media platform through your mobile cellular telephone device — Editor