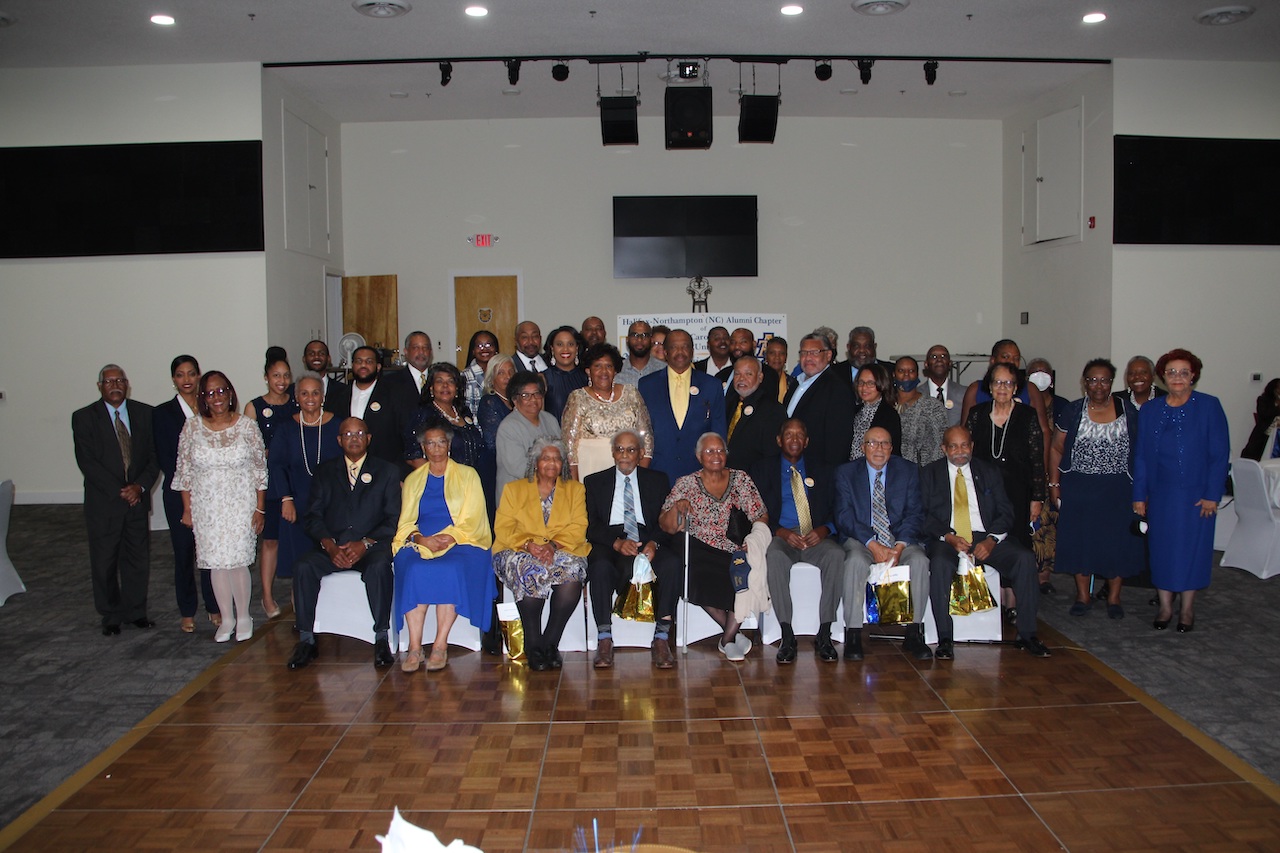 Over 100 guests, family and friends convened to celebrate this great milestone for the chapter.  The mood for the occasion was set by the smooth jazz music being played by Mr. Therman Taylor III.

Mr. Noah Davis served as the master of ceremonies for the program.

The three charter members who have remained with the chapter since its existence are:

Due to family/personal obligations, the following members were unable to attend; Robert Clark; Edward Mills, former president; Walter Jones, Luther Morris, Fred Brown and Tyus Few. Their 50-year medallions and other special tokens were received for them by chapter members.

Many of our beloved members who have entered eternal rest were acknowledged.

Their family members were present to accept their special tokens.

The late Barbara Bell Jones, former President for over 10 years, was represented by her niece, Valencia Hawkins Turnage.

A most moving candle light memorial tribute was presented by Mr. and Mrs. James and Stephanie Tillery.

The Northampton County recipient of the Dreamers to Achievers Scholarship was presented to MaKayla McNair from Gaston. The Halifax County Winner is LeNayal Hines from Scotland Neck.

Highlights of the chapter were given by Vice President Audrey Harding.

The chapter received its charter on September 28, 1972.

A beautiful media presentation composed by Schwanda Bowser was presented for this special occasion.

The delicious meal was catered by Odessa’s from Gaston.

Mr. Alfred Riddick Sr. extended a blessing over the food.

Ms. Melinda Hardy introduced the guest speakers who shared some of their Aggie experiences and acknowledged how the alumni chapter has been a positive influence in their lives.

Those who presented were:

Special presentations were made to the presenters by Tosca Townes and Julia Horsley.

The anniversary toast was given by Dr. Maurice Davis.

Before the program concluded, roses were presented to President Kimball for her dedicated service to  the chapter, the community and her family from her husband, Wayne Kimball Sr. and her Aggie children, Waynette Kimball and Wayne Kimball Jr.

Special thanks was extended to all by Chapter President Georgette Kimball.

She stated: “Many thanks to all the alumni, family, friends, community partners and all who helped to make this event a special occasion. We are truly grateful. To God we give all the glory.”

The program concluded with the singing of the university’s alma mater.

Many thanks to the anniversary planning committee for their time and dedication to the assignments.

We currently have over 200 alumni and current students in the area.

In 2014, the Halifax-Northampton Alumni Chapter was named Small Chapter of the Year.

President Kimball stated, “We are often recognized as a small but powerful chapter. The outstanding graduates of A&T from the Roanoke Valley Area have been and continue to  be outstanding and astute citizens — educators, administrators, orators, spiritual leaders, engineers, lawyers, judges, city officials, accountants, doctors, nurses, supervisors — in this area and beyond.