Louis Graham “Gray” Warren, Jr, 65, passed away peacefully at his home on October 11, 2021, surrounded by his loving family.

After moving to Sophia, North Carolina in the early 1980’s Gray worked at NAPA Auto Parts for several years before he was able to pursue his passion for auto racing when he was hired at Bill Davis Racing. 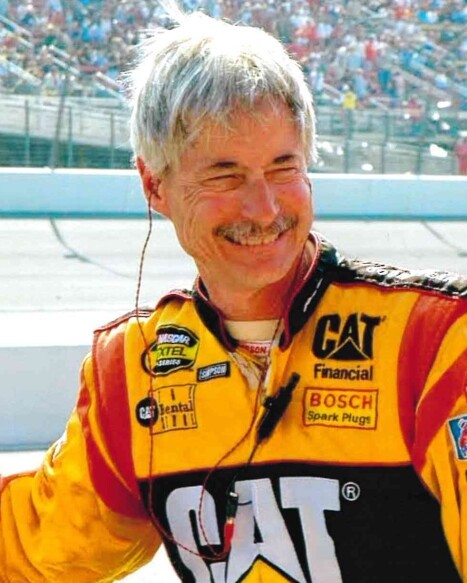 Although he spent time as part of the BDR pit crew, which he thoroughly enjoyed, and then later as a parts manager, his job far exceeded those titles.  He was so proud of that organization and was often asked to give tours to potential sponsors, civic groups, and church groups.

When Bill Davis Racing closed their doors, another door opened for Gray at Richard Childress Racing, and most recently at Childress Vineyards.

In addition to auto racing, Gray loved high school athletics and college baseball.  He absolutely loved Randleman High School athletics, and you could find him every Friday night eating a pre-game meal with the “Randleman Touchdown Club” at P&J’s Diner before helping Tommy McDonald announce the home football games.  He was also part of the Sports Tone Staff, and enjoyed broadcasting Randolph County Sports.  When Gray was not at the race shop or a ballgame, he enjoyed vacationing with his family and friends in North Myrtle Beach and listening to his beloved beach music.

A graveside service to celebrate Gray’s life will be held on Thursday October 14, 2021 at 11:00 at Marlboro Friends Meeting Cemetery 2668 Marlboro Church Rd Sophia, NC 27350 with Pastor Ray Luther officiating.  The family will receive friends immediately following the service in the Family Life Center from 12:00 to 1:30pm.

The family asks that those attending the memorial service and visitation please follow CDC guidelines.

In lieu of flowers, memorials may be made to the American Cancer Society, or the Ronald McDonald House of Winston-Salem, 419 S Hawthorne Road, Winston-Salem, NC 27103.

The family would like to thank the wonderful doctors and nurses at Wesley Long Cancer Center, and Authora Care, for their love and compassion during Gray’s final days.