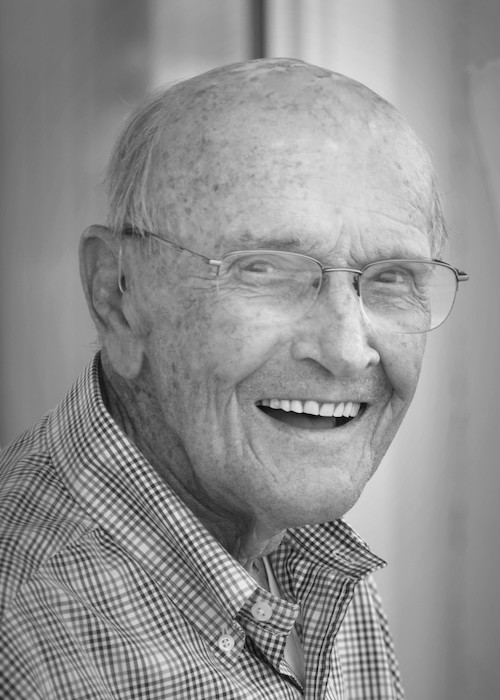 John Tillery Gregory IV, of Greensboro NC, died peacefully in his sleep on October 14, 2020 with family at his bedside.

John T. was a true southern gentleman, gentle and kind hearted. He was devoted to his family, relished a lifelong love of sports, and lived a long and full life.

John T.  was born in Halifax, NC, to Nelle Haynes and Quentin Gregory.

The third of six boys, he enjoyed country living on the Roanoke River in the beloved old family home place known as “The Pines.”

He and his brothers experienced a rich childhood exploring the woods, boating on the Roanoke River by their home’s low grounds, and swimming in favorite swimming holes.

His parents gave him an early love of sports. As a child, with his siblings and parents, he attended many football games at the University of North Carolina (UNC) at Chapel Hill in the 1930’s.

He graduated from Virginia Episcopal School (VES) and matriculated at UNC-Chapel Hill in 1943.

While there, he volunteered for WWII and attended the University as part of the V-12 program.  He was a star athlete, playing both basketball and baseball while at Carolina.

He played on the baseball team for four years and served as co-captain of the team for two years. Like his father before him, who graduated from UNC-Chapel Hill in 1902, John T. was inducted in the Order of the Gimghoul, a secret honorary society. He was an active member of the Zeta Psi Fraternity.

During his service years, he was a Lieutenant in the US Navy and was stationed in the Mediterranean. Upon returning from the war, he completed his studies in commerce at UNC in 1949.

His life’s work was in the trucking business with Ford Trucking Company, where he was the Sales Manager for truck fleets in the southeast. He was named Sales Manager of the Year several times.

He is preceded in death by his five brothers: Quentin, Haynes, Tommy, Miles, and Bobby.

The family is holding a private celebration of his life at Holy Trinity Episcopal Church.

In lieu of flowers, John T.’s family requests that memorial contributions may be made to St. Marks Cemetery, PO Box 145, Tillery, NC 27887.

Online condolences may be offered to the family at www.haneslineberryfhnorthelm.com.