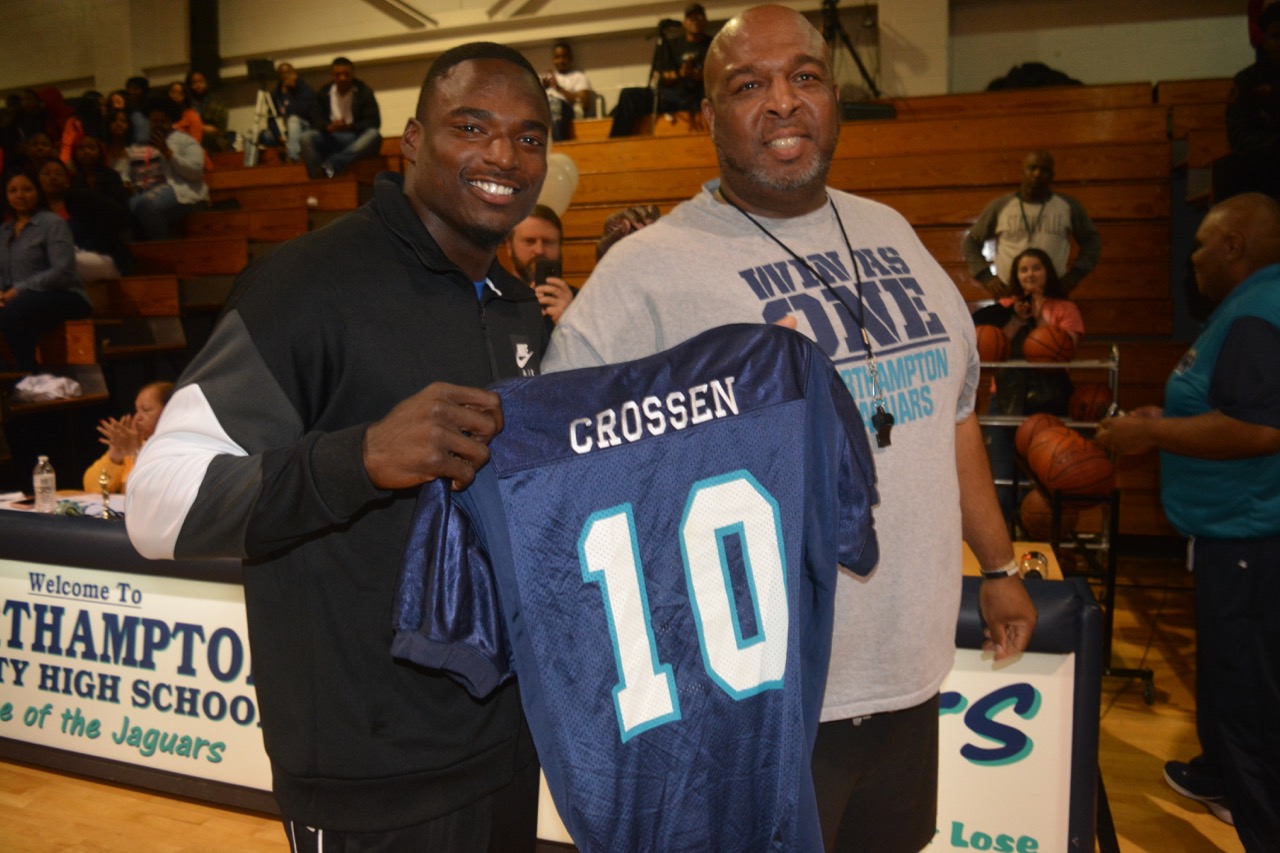 It was a visit where Crossen received his number 10 NCHS jersey and the announcement was made it will be retired later in the spring.

His appearance, between quarters of an NCHS girls basketball game against Weldon, brought the fans to their feet as Crossen was greeted by staff and friends.

The defensive back for the Patriots made his way into the stands before settling in for a radio interview.

“It’s great to have him back,” his high school coach George Privott said as Crossen interacted with fans. “I know the type of situation he came from. He was one of the hardest-working athletes I ever had.”

Privott believes the Garysburg native will succeed in the NFL. “He’ll get more playing time and get a chance to start.”

There is more in store for Crossen, Privott said — the official jersey retirement and a parade.

In the locker room of the high school gym, Crossen gave a pep talk to the boys basketball team before they took the court. “When you win, you win together. Don’t let them come beat you in your house. It’s time to get it done.”

One man said after the pep talk, “That’s the alpha Jaguar.”

As the basketball team cleared out, Crossen talked about coming home and the Super Bowl victory.

“It’s feels amazing to come home, just to get to see fans and family and get to see alumni, old coaches, the whole support staff,” he said. “It’s just great to be back and enjoy the moment.”

On the reception he received at the high school gym, Crossen said, “It means a lot. I definitely appreciate it to know that your hometown is watching you. You’ve got little kids watching you. That just shows you people care, they’re happy to see somebody do good. I’m glad it could be me and I continue to keep that path straight and make sure I lead the kids in the right direction and keep a good name for the community.”

One of his stellar plays in the Super Bowl was on a return play. “That was a flat play, they had a dangerous returner. The man was like top five in the league in returning yards so the idea was to try to stop him and get down there as fast as possible. Coach put speed on the field so I had to do my job and tackle the guy. That’s what we did, me and Matthew Slater.”

While there has been much discussion on game’s low score, Crossen said, “They pay to watch and I get paid to play.”

It could arguably be described as a defensive matchup. “Every game is competitive,” he said. “It depends on who you wanted to win. A lot of people don’t want us to win so I’m sure the game is boring when you see a six-time champion about to win a game, the Super Bowl especially. It is what it is. You’ve got people that’s going to like you, people that’s going to hate you. Everybody is entitled to their own opinion but at the end of the day the Patriots are Super Bowl champions and that’s all that matters.”

Getting to hold the Lombardi Trophy, “It was a special moment,” he said. “That’s the moment you play for. You play for it on Madden and things of that nature and getting to hold that Lombardi Trophy it feels good. You work hard for that one moment and you got one team in your way. You’ve got to execute to the best of your ability and have less mental errors than the other team and we did that and it was great to be able to do that with your teammates.”

Crossen said the Super Bowl rings are a few months away from being delivered. “We’ll get it when we get back. It’s going to feel good I’m sure. I’m sure those hands, those fingers are going to be heavy.”

There’s mutual respect between Crossen and Privott. “He’s a good guy, a good man,” Crossen said. “That’s hard to find in a coach. Most coaches come out and they don’t have a relationship with their players and I had that in high school through college, even in the NFL.”

Crossen and Privott maintained a relationship on and off the field. “Me and coach Privott connected on and off the field, whether he was calling plays and I ran it backwards or we were eating at Ralph’s Barbecue for the conference meeting. He and his little daughter, she’s  just like my little sister so when you connect with your coach off the field that makes a big difference in a student athlete’s life.

“That can be the determining factor of them going one way versus going the other way. That’s good versus bad and I appreciate that from him and all the coaching staff. He took a lot of time out but really just to continue how to teach me to be a young man. We had fun. We joked. I probably took his class at least six times in my high school career but I had a good time. That’s what you remember. We made memories and I appreciate that.”

Privott remembers the day he realized the potential Crossen had. “When I knew he was a special kid they know the rule is practice is never canceled.”

But one day it was due to a meeting Privott had. “I swing by the school and pick up my laptop and coming out of my office I look down at the field and see somebody out on the field.”

It was Crossen running sprints. “He’s the only one out there running sprints by himself and I was like that kid right there, I knew everybody else had sprinted to the doggone bus when the bell rung but he stayed out there working hard by himself. It takes a special person to be able to do that.”