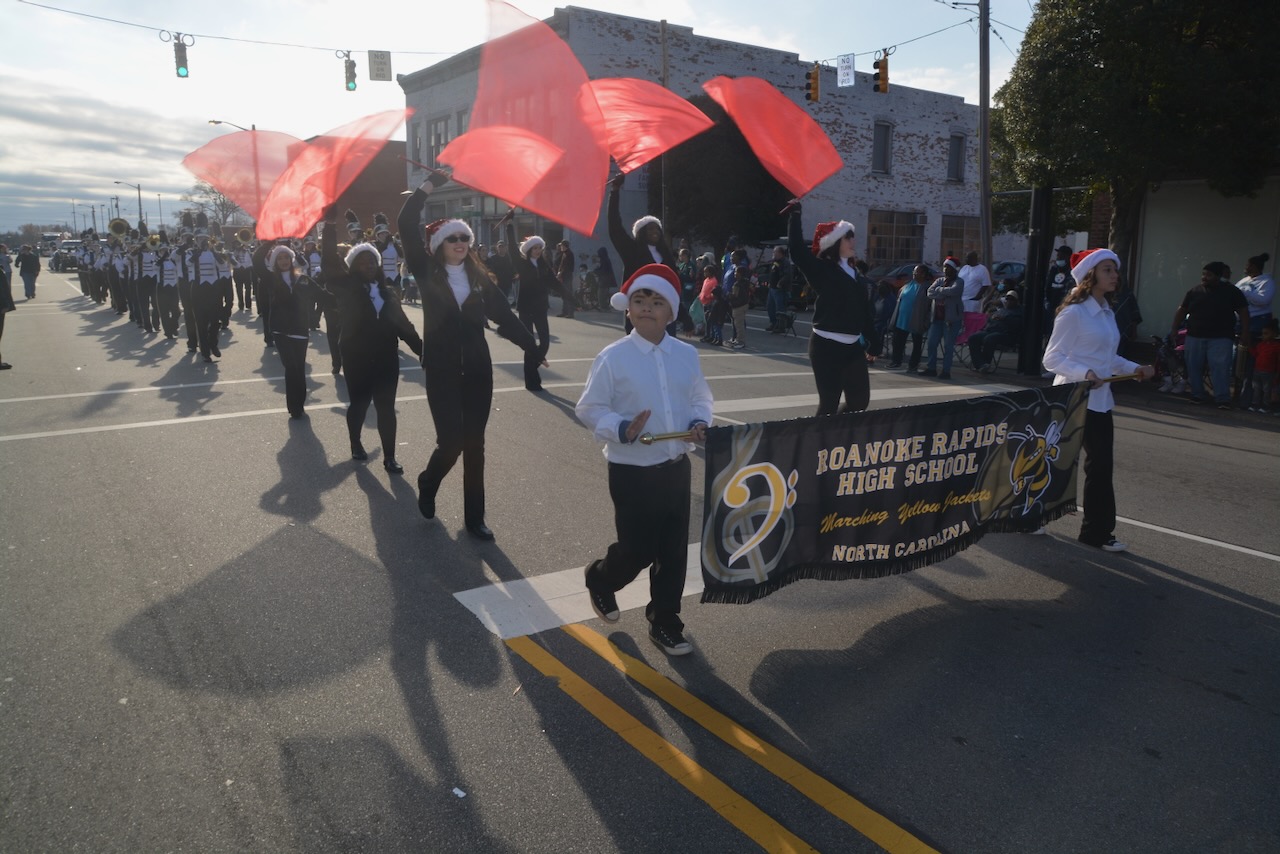 City Parks and Recreation Director John Simeon made the announcement this morning on the Maverick 102.3 talk show.

Sponsored by Halifax Linen and Roseburg Forest Products, the parade steps off at 2 p.m. down Roanoke Avenue on December 4.

“We’re doing something just a little bit different,” Simeon said. “Usually we have a grand marshal, an individual, but this year the city of Roanoke Rapids would like to recognize the Roanoke Rapids Graded School District and all of their employees for what they have done.”

He said the decision came after seeing how effectively the school system worked “through the unprecedented COVID 19 pandemic.”

Said Simeon: “They have just done a miraculous job. They have done the best job they could and I think they have done a fantastic job.”

The grand marshal honor goes not only to the teachers and administration, but all employees. “There’s some people that probably don’t get recognized when it comes to that — those employees that are serving lunch, those employees cleaning the rooms after the kids leave that the kids don’t see. There’s a lot of people in our Roanoke Rapids Graded School District who did a fantastic job and not everybody recognizes them but we all think it’s great.”

Roanoke Rapids Graded School District Superintendent Julie Thompson, who joined Simeon on the air, said, “We really appreciate what the city is doing. Our new district vision is together we succeed and I think through COVID we did succeed because of our community support and our family support.”

Thompson praised the system’s staff. “We have such an amazing staff. It was unprecedented and we got through it and we’re out of it and we got back to school as normal. We’re just really proud to be grand marshals of the parade. We thank the city so much. We thank Mr. Simeon for offering the invitation to us.”

There are some 2,800 students in the system and about 350 staff. “We’ve got a great team and everybody is working together,” Thompson said. “We’re just thankful to be able to do it because all of us are here for the kids and I think it’s important.”

Simeon said with a cut-off looming Friday for entries, so far there are 60 units which have signed up.

Simeon said the city enjoys “recognizing a great group of people. It’s a full team effort and what a great group in the Roanoke Rapids Graded School District.”

The parks director said he is hopeful that all involved in the school system will get behind the effort. “It’s going to be fun. We’re hoping that all of the schools will get involved with this and they’ll wear their school sweatshirts and T-shirts so you’ll have Belmont, you’ll have Chaloner, Manning and the high school.”

Other schools in the district including Clara Hearne, ACES,  and Roanoke Rapids Early College will be participating, according to the school system.

The principals will lead their schools down Roanoke Avenue and there will be a professional float for the grand marshal. “We’d love to see all the schools represented, challenge their principals for you and talk to their employees, get onboard and they’ll have a little contest between themselves. I can’t wait to see everybody from all of our schools out there.”

City Manager Kelly Traynham told the council at its meeting Tuesday Christmas on the Avenue, also sponsored by Halifax Linen and Roseburg, will be from 6 p.m. to 9 p.m. at the 1026 Roanoke Avenue green space as well as Centennial Park.

“We thank them for their contributions,” Traynham said of the sponsors.

On December 3 the recreation department is having a family movie night at T.J. Davis Recreation Center at 6 p.m. Tracy Story and Discount Tire and Automotive is sponsoring the event in which Polar Express will be screened.

“We look forward to many of these holiday events to bring the community together,” Traynham said. “Our city staff worked very hard and diligently to get the lights right and have things organized. There’s a lot of production involved. We do appreciate the work that they do to make it an event for everyone.”