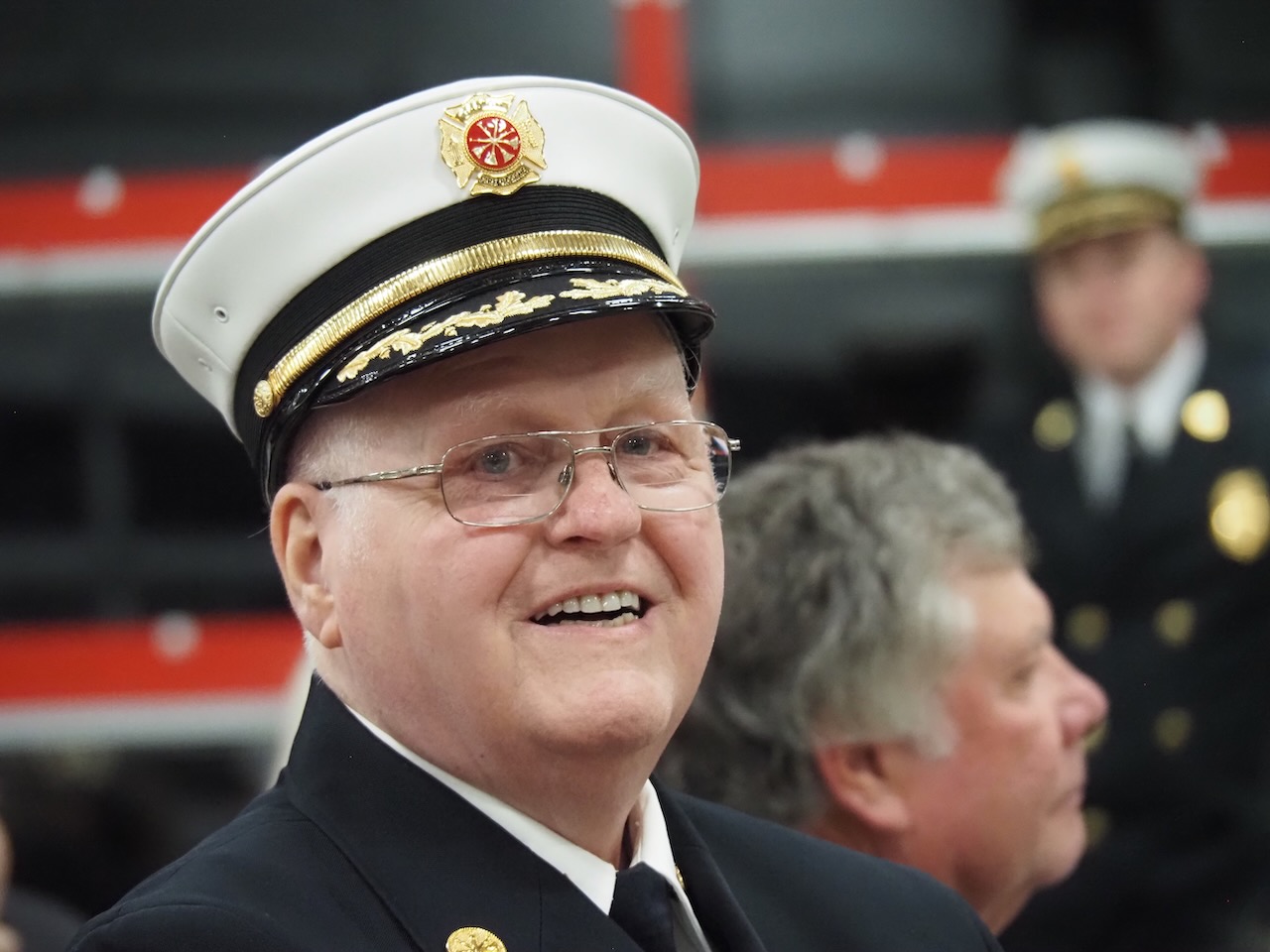 Gaston deputy fire chief Ed Porter Sr. was not only recognized by the state and county Monday night, but by several friends, colleagues and family members who are also in the fire service.

A.B. “Bobo” Roye, who is retired from the Northampton County Sheriff’s Office, said in 1991 he met Porter at Halifax Community College. “I spent two weeks with him and I got a really good friend out of that deal.”

Roye said he learned a lot from Porter. “We have had some good times, but there’s one thing you taught me and that’s love. I’ve always loved you, I’ve always wanted to be like you but I never will, but you’re the greatest man I think I’ve ever known.”

Retired Jackson police Chief John Young told Porter, “There’s many a man and woman who owe a lot to you for who they are and what they’re all about to you. You set the example, you set the mold, and nobody can break it.”

Young presented Porter a state flag from the state Department of Public Safety.

Porter’s nephew, Howard Porter IV, said of his uncle, “I knew him as a Methodist minister and a lieutenant in the Baltimore County Police Department. He retired from there before I started and he’s also my hero.”

Porter IV recalled a time when he was 4-years-old that his uncle saved from drowning in a swimming pool. “He saved me. He saved my life.”

Eddie Porter III, the elder Porter’s grandson, said, “For as long as I can remember Pop-Pop has always been in the fire department.”

Porter III remembered running calls with his grandfather when he first joined the department. “There’s not many people that can say they ran fire calls with their grandfather.”

The younger Porter said even today, at age 86, his grandfather still goes on fire calls. “First thing he does, at age 86, he rolls up at 4 a.m. for a structure fire.”

At 86, his grandson said, “He’s as lively as I was, as all 16-year-olds are, going to fire calls, going to cardiac arrests. He finds his way to help.”

The younger Porter said on trips to nursing homes and rest homes he sees people in their 50s and 60s that are not nearly as spry as his grandfather. “He’ll do anything for you. Hopefully one day I’ll be half the man he is.”

Porter’s grandson presented his grandfather a replica of a bell on one of the department’s trucks that was placed in the elder Porter’s honor.

The elder Porter’s son, Ed Porter Jr., who is the chief of the department, said of his father, “All my life I’ve been in the fire service, around the fire service. I’ve watched dad run in and out of calls.”

Porter Jr. said, “It’s been an honor for him to be my dad. He’s been a blessing to me. I actually accepted Christ as my savior under my dad’s preaching … Not only has he been great in the fire service but he’s taught me to love the Lord.”

On behalf of the department his son presented his father a wood carving with a photo of his father in Baltimore County and a current one.

North Carolina State Highway Patrol Trooper T.L. “Tare” Davis said it was the elder Porter who hired him to teach the basic law enforcement training physical fitness class. “Dr. Porter has always been an inspiration to me.”

Davis said the mantra of the highway patrol is to always take care of the firefighters. “The men and women of the volunteer fire departments are getting out of their beds and they’re coming out there to assist you.”

Davis said Porter Sr. has led the way in his demonstration of commitment to the fire service. “It had to be something you passed on to them that service is more than wearing a uniform. It’s working together.”

Garysburg Mayor Roy Bell, a firefighter since 1979, said the late Garysburg Chief Nathaniel Ausby introduced Porter Sr. to him. “This gentleman here — I don’t care how late it is, how early it is, I don’t care what time it is — he’s always there because they assist us in a lot of our fires. This guy looks fresh and I can barely walk. He is alert, he is awake, he’s making sure things are getting done, he’s looking out for fireman’s safety. He’s just out there and sir you are an inspiration to me.”

Moseley joined the Gaston Fire Department that same year. “Dr. Porter has been a mentor to all of us. In 2008 when I became a certified law enforcement instructor, Doc was still teaching hazmat.”

Porter Sr. gave Moseley the hazmat job and he has been teaching the class since 2008. “Dr. Porter, you're a great man and I appreciate the time I’ve been in your life.”