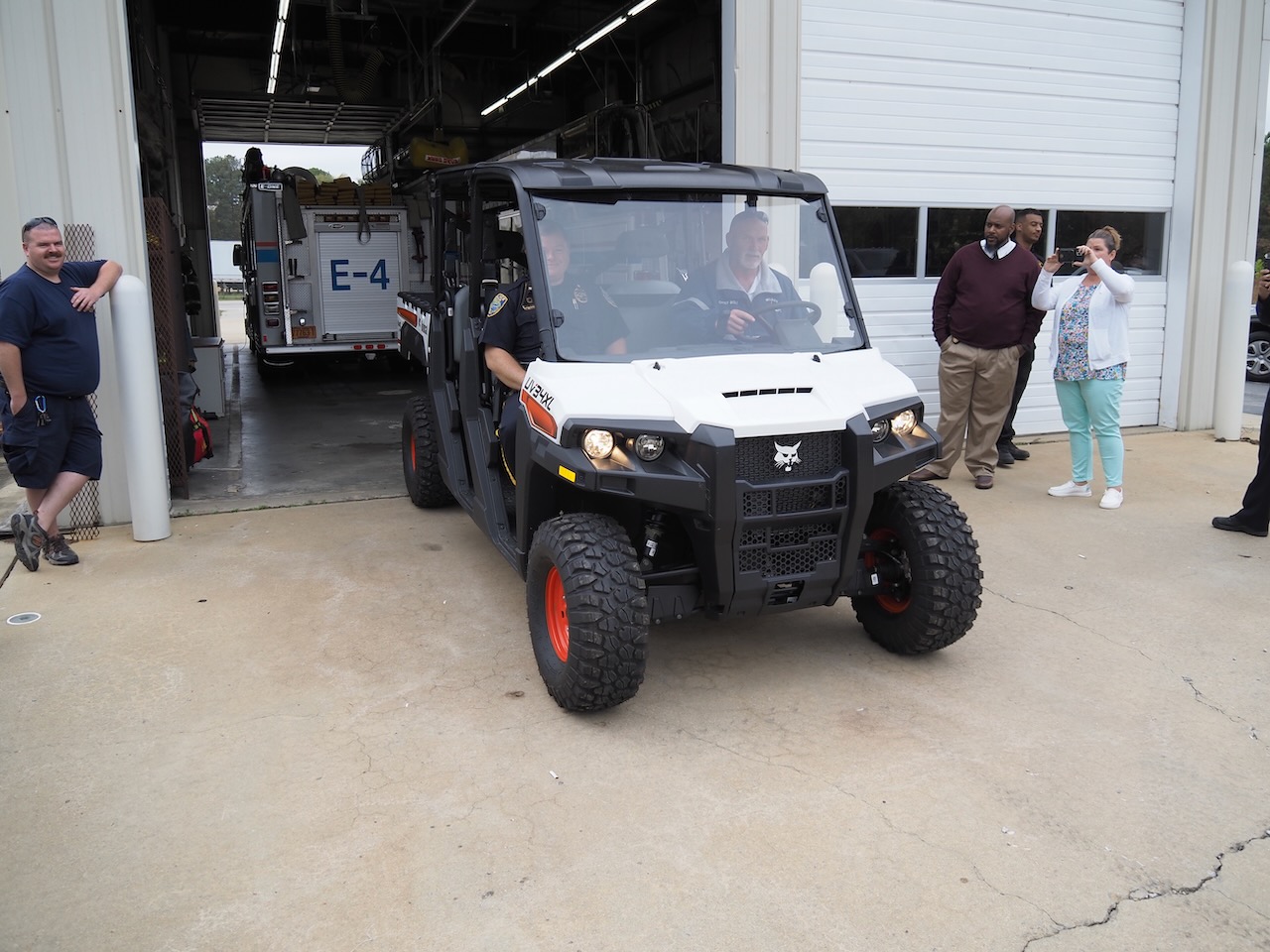 Tracy Story said the question was posed if an emergency occurs on the Roanoke Canal Trail how will personnel respond.

That answer came in the form of a Bobcat utility vehicle which was donated to Weldon’s police and fire departments through Story’s Unwritten Story Foundation, Roseburg Forest Products and Enviva.

“It’s going to help us a lot when we have somebody on the canal trail who gets hurt,” Bolt said. “We’ve had to tote people out for a mile and a half before. Scotland Neck just had a hunter who was deep in the woods and they couldn’t get vehicles to it. It would help us pack in stuff, equipment to get help. Also it will help people who are lost and deal with search and rescue.”

In the past the fire department had to borrow similar vehicles from other agencies, Bolt said. “Some of them are too big to go on the bridges of the canal trail. I think this one will be able to fit on the bridges.”

Recently the fire department responded to a call of a person who broke their ankle on the trail. “He was a mile-and-a-half either way. We had to walk him out in a Stokes basket,” the chief said. “You take so many to tote them out. This vehicle will take four or five people in it. You put (the patient) on it and bring (them) out.”

Bolt said the vehicle will be used by other agencies. “We’re all a brotherhood. We’re going to take care of the whole county.”

There are already discussions by volunteers to do a fundraiser for a trailer and Story said the donors of the vehicle have agreed to help further outfit the vehicle with the necessary equipment.

Bolt said Davis and Story came up with the idea. “He said he would get sponsors and donations. Chris Davis came to me with it so it’s fire and police. Tracy Story’s the one who took the ball and ran with it.”

The conversations began a few months ago when Davis approached Story, who owns Discount Tire, about using one of the company’s side-by-sides for an event. “We loaned it to him and took it over. It worked out really well for them so in conversations it kind of came up that they could use something like this to help with community events. One of the biggest drives for me was the canal trail.”

Story said contacts were made and then the funds were raised for the vehicle. “It was a group effort,” Story said, crediting state Representative Michael Wray for helping to initiate the effort. “I was able to reach out to him. He was able to put me into some good contact which was able to bring in some funds to make this happen.”

Wray contacted Roseburg sawmill Manager Adam Reed and Chris Brown of Enviva. “They said they’d be more than happy to participate. That’s how the ball got running.”

Story said the vehicle has unlimited benefits. “You can use this for local, you can use for offroad. You can use it inside the county. If there’s a missing person somewhere else another facility or another department can reach out to them. There’s so many things this can do. It’s just not something that’s going to be helping Weldon. It’s going to be something that can help anybody in Halifax County.”

For Davis, the vehicle is going to help with special events. “It’s going to help us deliver food to officers and others who are working events. It will help us the same way it helps the fire department when we have something going on on the canal trail that we need to get to quickly, fast and in a hurry. It will help us get there instead of the way we do now which is on foot.”