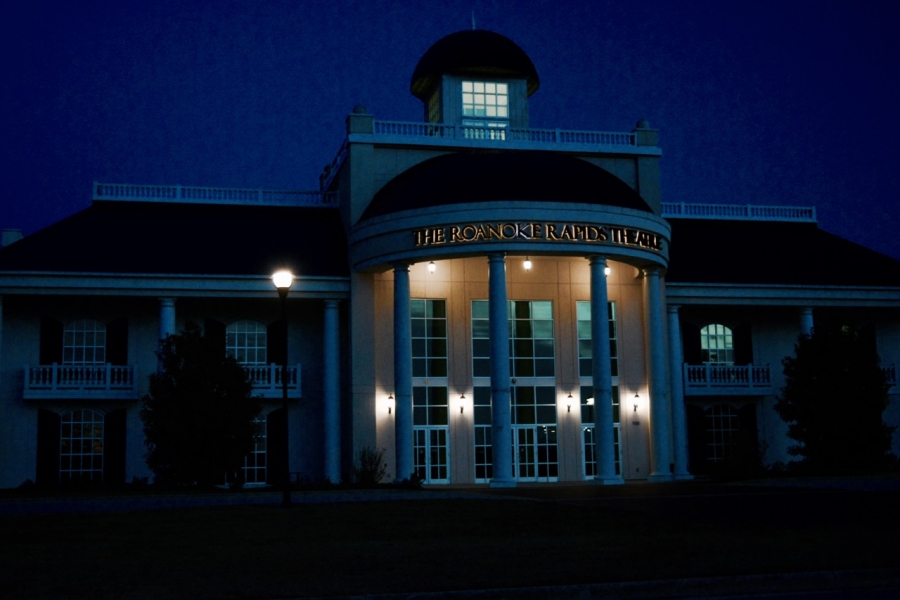 Interest shown in theater as city plans second bidding round

Before Roanoke Rapids City Council voted Tuesday to conduct a second round of sealed bids for the theater, the panel heard from two parties interested in buying the venue during a public comment section of the meeting.

On a 3-2 vote council agreed to begin the sealed bid process again after the first round produced no bidders.

That vote established a minimum bid of $1.5 million and was backed by council members Wayne Smith, Rex Stainback and Tommy Daughtry Jr. while Sandra Bryant and Carl Ferebee voted against the measure.

According to the resolution introduced by City Manager Kelly Traynham, the city will accept sealed bids for the property through 3 p.m. on Wednesday, October 26. At 3 p.m. that day the sealed bids will be opened in the first floor conference room of city hall. On November 1 the council will hold a special meeting to discuss the bids.

During discussion of the matter Mayor Emery Doughtie said, “Last time it sold for around $3 million. I don’t feel like any of us here thinks it’s gone up exponentially since then. If we put a minimum bid on it this time, a business person is going to have some idea of what I think we could get for the property.”

Doughtie said the city wants the venue to be in private ownership. “It’s costing us thousands of dollars a month and we’re not getting any tax revenue off of it.”

The theater, the mayor said, “Was meant to be a hub to try to grow the 171 exit. It’s going to take somebody with know-how to do that. We’re not in the property development business. We need to do all we can as quickly as we can to get it back to some people with some ideas, finances to make this property work.”

Smith, who ultimately made the motion to use the sealed bid process a second time, said, “I think council needs to look at this thing real well. The cost to the city so far in the 13 to 15 years that we’ve had it, the citizens of Roanoke Rapids have paid a little bit over $21 million. That’s tax money we’ve wasted in the city of Roanoke Rapids. It’s costing us money every single day that we keep it because there’s light bills, it costs us maintenance. We need to think about getting that theater out of our hands and getting somebody that’s willing to bid on it so that we can be able to get this out of our hands.”

Smith said while the city might not get what it wants for it, “Sometimes you have to bite the bullet to get it in the public and let the public do what they do best – to make a go of something.”

Meanwhile, during the public comment section of the meeting, Timothy Robinson, who with his wife Elizabeth, revitalized Fairwood Lanes, said they, along with contractor Derrick Bennett, were interested in the venue. “We both operate facilities that were closed down in this town that weren’t successful. We turned them into successful facilities.”

Robinson said because of a conflict of interest during the first bidding round his wife could not bid. “My wife wants it. She runs the bowling alley and has done a durn good job. Derrick is running 51 Sycamore and is doing a dad-gone good job.”

Robinson said the conflict came about when his wife, a real estate professional, was working with a client on the initial bid period. “When this client did not bid I feel like it dropped the conflict of interest.”

Robinson said he and Bennett “would have a theater for everyone. We run a bowling alley where every race, every national origin, every walk of life (comes to) and we are proven. Mr. Bennett is proven. If we open up something it will be profitable and you’ll be proud.”

Leslie and Dewey Brown also expressed their interest in the venue.

Mr. Brown said he and his wife, who run the Liberty Showcase Theater and the Reidsville Showcase, would love to put a bid in. “Even though there wasn’t a bid early on it brought attention and a little bit more time.”

The Browns have shows every weekend at both their venues, said Mr. Brown, a former fiddler with the late Bluegrass star Ralph Stanley. “We run a lot of country shows. Pam Tillis is with us this Friday. We would plan to do that and bigger.”

He said with the Roanoke Rapids Theatre, they could actually put on bigger shows. “We’re limited to 450 seats and 325 at the other theater. Fifteen-hundred seats and the facility inside the theater itself is so much greater and it would allow so much more room to grow.”

Mr. Brown said he and his wife love the business they’re in. “This is our full-time business. It would be nice to expand to this and a great, huge leap and we would definitely be excited about what we could bring to the area. If it was under the right hands and sensible decisions, common sense (are made) the building has everything anybody could ever imagine.”