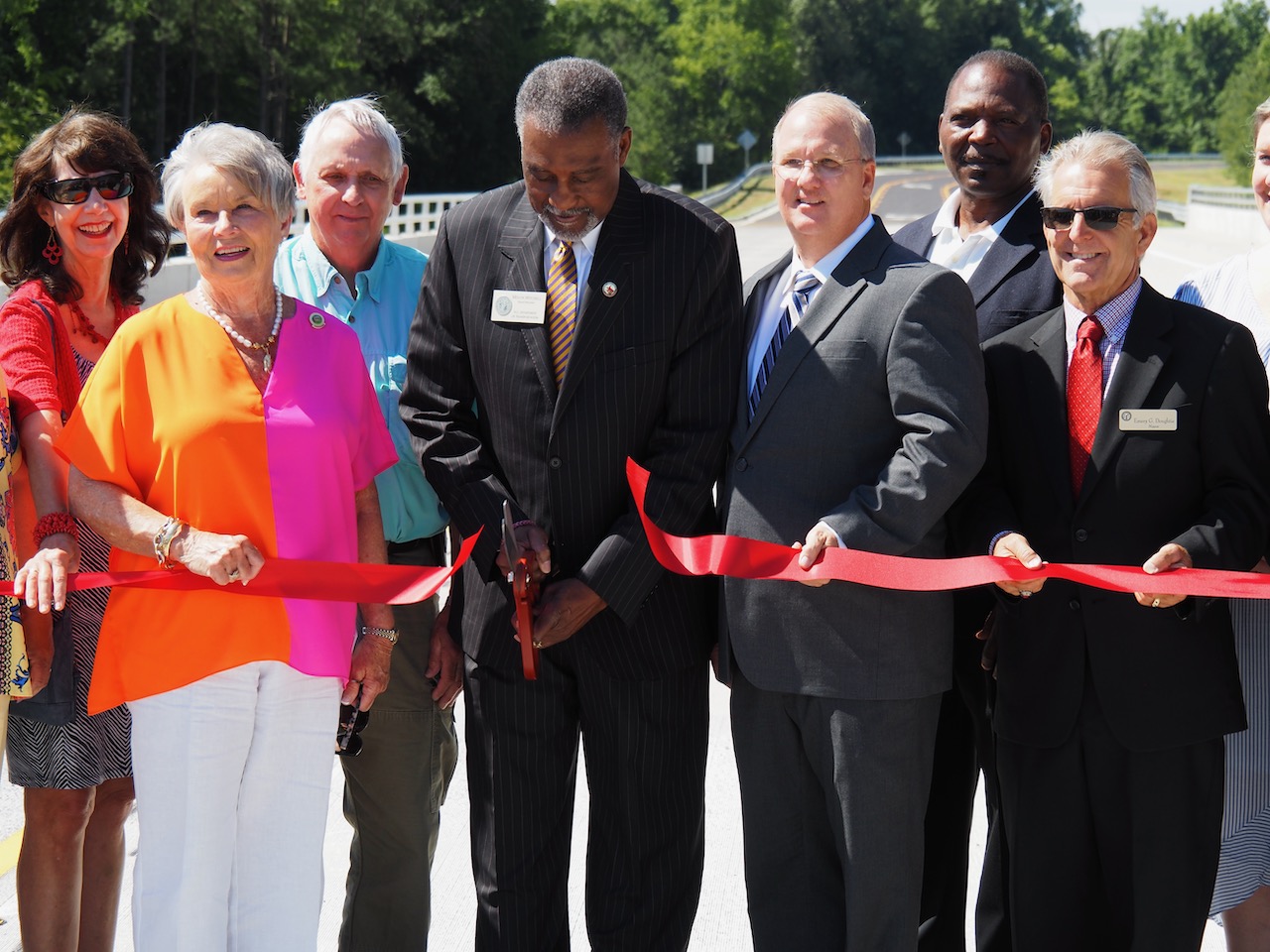 Barricades come down to usher in Premier extension

By the time barricades had been removed from both sides of Premier Boulevard Extension, vehicles began making their trek down the newest road in Roanoke Rapids.

Earlier in the morning, after remarks were made, officials cut a ribbon dedicating the new thoroughfare which extends to Highway 125.

“This is a very significant project for Roanoke Rapids and Halifax County,” said North Carolina Board of Transportation member Melvin Mitchell during the ceremony this morning. “This project will greatly improve mobility, reduce congestion and improve highway access and business development for residents and businesses.”

Kristin Barnes, interim director of highway operations for the North Carolina Department of Transportation, said, “This is an exciting event and just personally, I was the district engineer when this project kicked off here in Halifax so I have a personalized aspect to it and have been passionate about seeing it through.”

Barnes said today was actually a celebration of several major road projects in the county “that are going to have a lasting and tremendous impact on this area.”

The projects include extending American Legion Road, the Premier Boulevard Extension and the widening of Highway 125 and “demonstrate the many strong partnerships we have with our local leaders and with the Peanut Belt RPO. Their input and desire to improve their community made this project possible,” Barnes said.

The $24.5 million project was completed by English Construction.

Barnes said projects will help plan for future growth and traffic volume as well as economic development. It will also help improve access to the Premier Landing Shopping Center.

Roanoke Rapids Mayor Emery Doughtie said, “This road that is opening up today will benefit people of Roanoke Rapids, Halifax County and those that you hear traveling up and down the interstate.”

Doughtie said many small towns, particularly in eastern North Carolina, have been cut off by the interstate. “We were fortunate in many ways that it has come pretty much through our community. Most of what was built out this way would have probably moved to another town and we would be in a situation that so many towns in eastern and rural North Carolina are. They don’t have the means necessary to bring new construction, new jobs, new revenues to their community.”

The mayor said he was happy to see developers at the event. “I hope they are looking on with great interest about this valuable property. We have some property owners here. I thank them all for their patience in this being a long and arduous process.”

Doughtie said DOT has looked favorably upon the county and the city. “They re-milled and paved our avenue which is also Highway 48, they’ve redone West Tenth Street. I credit that to our representation in the General Assembly.”

The mayor also credited retired DOT Chief Engineer Ronnie Keeter of Littleton for his service. He acknowledged the work of county Economic Development Director Cathy Scott for what he termed her tireless work on the project. “(State representative) Michael Wray has done a great deal for our community. He has worked very hard with the legislators to bring economic development, to bring dollars to our community to do projects that we would have not been able to do had it not been for him.”

Doughtie thanked City Manager Kelly Traynham. “This has been one of the projects that during her planning skills she’s been able to us move that forward.”

Halifax County Commissioner Linda Brewer said she used to ride horses and later ATVs in the area. “I’m a little experienced in this piece of property out here. Years ago my grandmother said ‘good things come to those who wait’ and today is certainly indicative of that.”

Brewer said the process leading to the ceremony had been long in the making. “The extension of Premier Boulevard and the widening of NC 125 had been on the priority list of the Peanut Belt RPO since 2010.”

Brewer said the Highway 125 improvements are extremely important. “I can tell you that the extension of this Premier Boulevard is one of the most highly anticipated projects that I remember in my lifetime.”

She said one of the most important benefits of the Premier project is that it will connect exits 171 and 173. “This is going to be a great economic benefit. This extension opens hundreds of acres of land for retail, commercial and residential development. The extension will also provide additional traffic and more visibility for existing businesses already on 125 and Premier Boulevard Extension.”

Wray said, “This is truly a blessing to our community and it did not happen overnight. A lot of people have had a lot of input in this project here.”
The process hasn’t been an easy journey, Wray said. “You have people that want growth and you have people that don’t want growth but at the end of the day it’s like the field of dreams — if you build it they come, if you have a vision they come. Throughout the process this is truly a blessing of working together works.”

The projects are going to be a blessing for the area and its future, Wray said. “Our people are the lifeline of this community and what is really the lifeline is I-95 and the 40,000 heads that go up and down this corridor every day.”