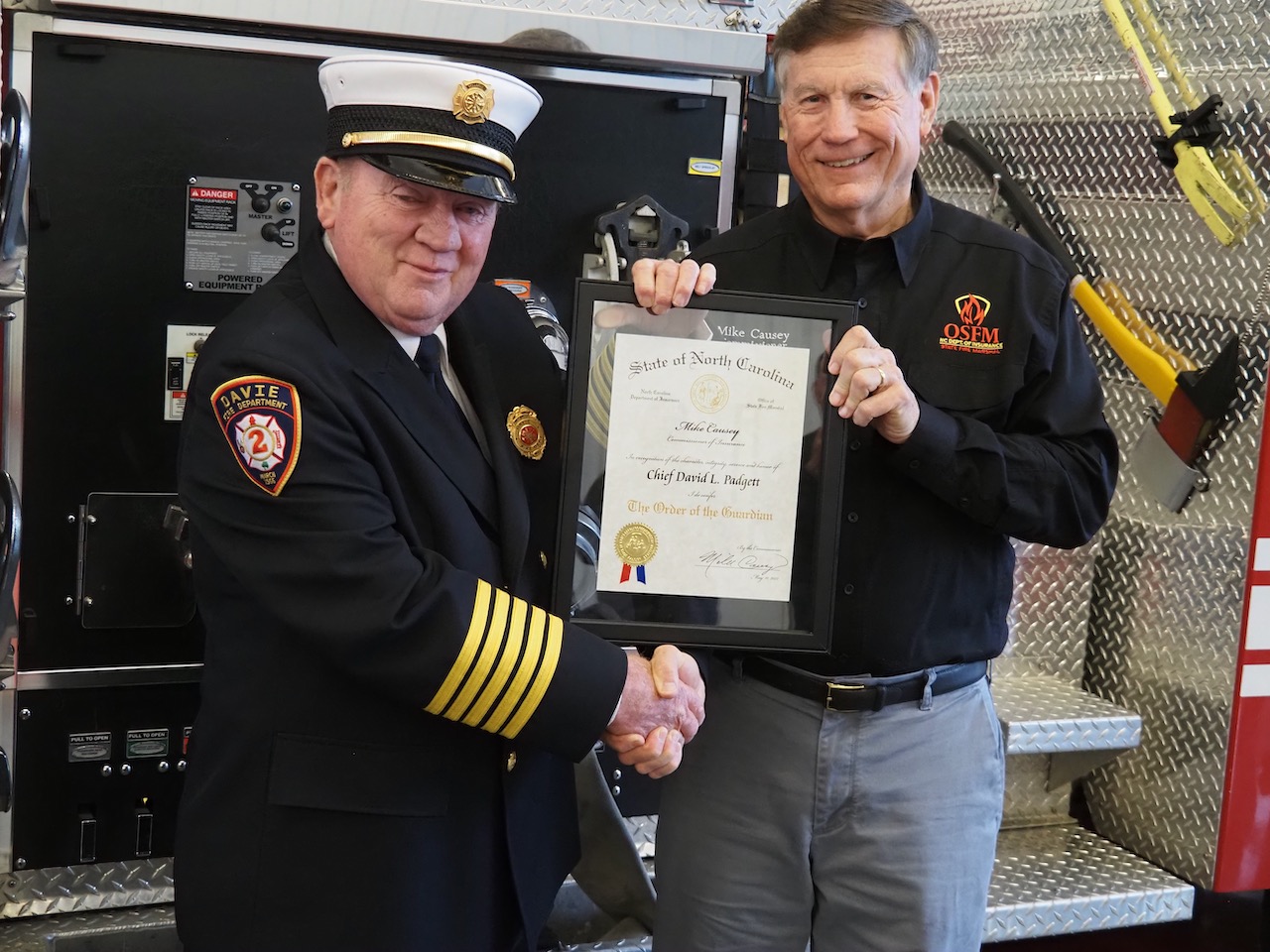 Davie Volunteer Fire Department Chief David Padgett had the first inkling of being in the fire service when he was a small child.

After 50 years of service he was honored today by the North Carolina Department of Insurance and its Secretary Mike Causey with the agency's highest award — The Order of the Guardian.

“I’m here to thank you for your 50 years of service and all that you’ve done for this community and the fire department over the years,” Causey said. “This is in recognition of your character, integrity and service to the citizens of North Carolina and this community.”

Tony Bailey, an Office of the State Fire Marshal ratings and inspections specialist, said he met Padgett in the latter part of 2010-11. “Chief Padgett’s probably never met a stranger in his entire life. He’s always outgoing and well-respected by his fellow peers here in the county,” he said. “He’s a hard worker. He always had his paperwork in order when I was here to get the inspection done. He improved on ratings each time we came. That’s a testament to the hard work that you and everybody does every day.”

Bailey praised the facility which houses the Davie department as well the equipment stored inside. “We’re blessed to have people like you,” he said. “I thank you for everything you’ve done for us over the years and everything you’ve accomplished.”

State Representative Michael Wray said, “It’s an honor and privilege to be here today to honor 50 great years and many more years to come. This is what life’s about. Working together works.”

Halifax County Board of Commissioners Chair Vernon Bryant described Padgett as an icon in the local fire service. “Thank you so much for all you have done and all you continue to do for Halifax County.”

In accepting the order, Padgett thanked his fellow firefighters and those from other departments with whom they work alongside. “These guys here have been a friend to me and we try to work together and rely on each other through mutual aid.”

Padgett said, “These guys have been dedicated to the fire service. They’ve stood by when we needed them and we try to be there for them. These guys in the fire service are like a brother to me. I want to give credit to these men here.”

Padgett started with the department at 18. “I had no idea I was going to stay here for 50 years. This doesn’t seem like 50 years really. Some of it has been hard. We’ve got a good team here.”

He thanked the commissioners for supporting the fire department.

While he joined at 18, the calling came even earlier. “I first had an inkling of what I wanted to do when I was a small child.”

He would follow the firefighters of Roanoke Rapids. “Most of those guys have gone on but I was proud of them.”

He also had a passion for other volunteer emergency services and remembered hearing the Roanoke Valley Rescue Squad was raising funds.

He bicycled to the station after hearing the RVRS needed money. With a dime in his pocket that was part of his movie money he made the small donation. “After that they called the newspaper and my picture was on the front page. That was all I had was my movie money. I just wanted to give a dime and go on to the theater.”

Over the years, he said, “I’ve met a lot of good people. I thank y’all for the award. I thank all of y’all for being here. It means a lot to me. It really does.”