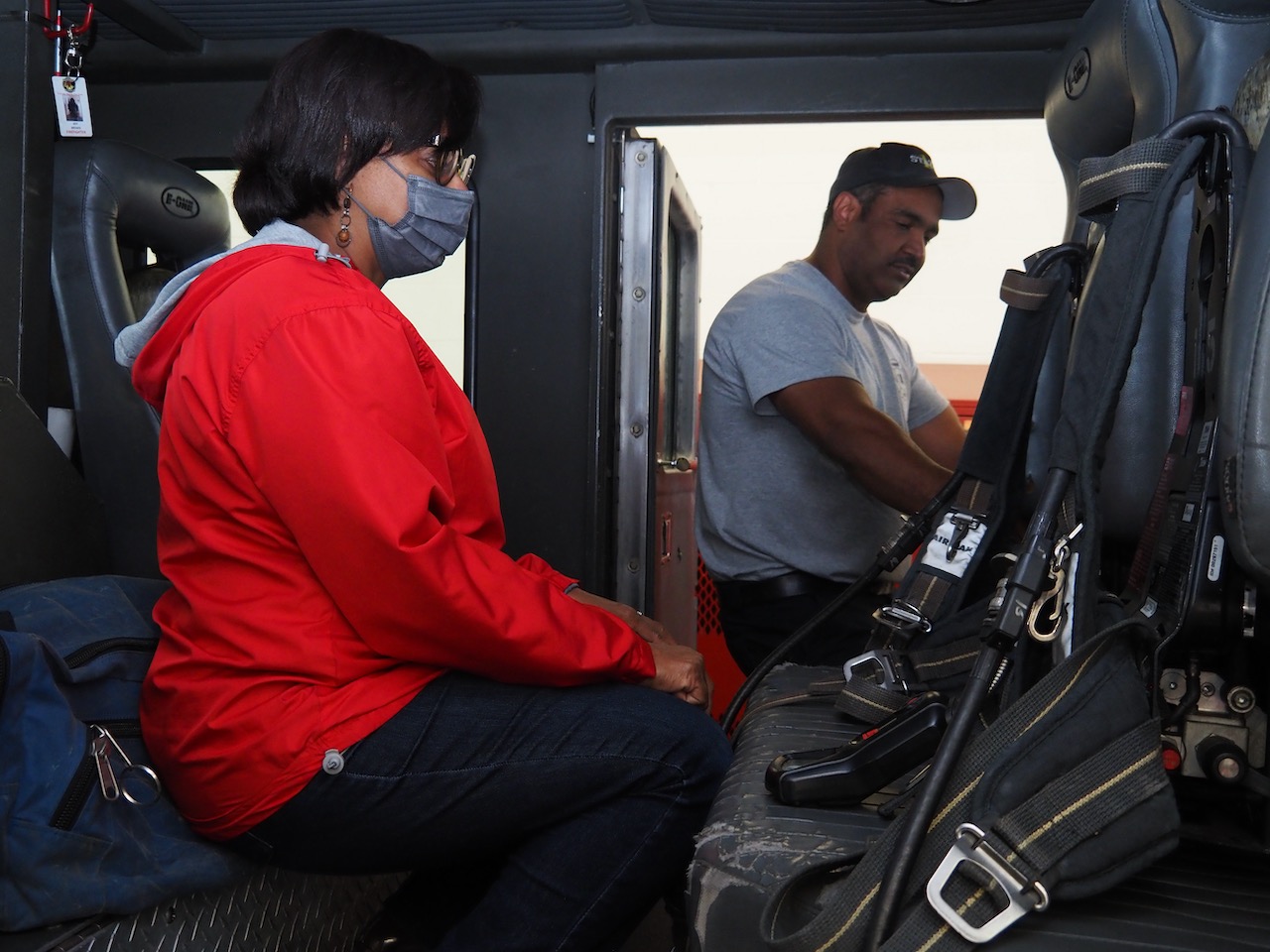 The biggest need for the Roanoke Rapids Fire Department is two fire engines.

Thursday afternoon Chief Jason Patrick along with members on duty at fire station 2 gave city council members a tour of the facility and discussed their needs at a budget work session.

Council is meeting the various department heads at their buildings instead of having the meetings at the Lloyd Andrews City Meeting Hall. They met with the public works department Thursday morning.

“We all know that the most important need is two fire engines,” Patrick wrote in a recent memo to City Manager Kelly Traynham. “Our department has been short a fire engine for many years.”

A 1981 Pierce engine was taken out of service because of safety issues with the brakes and the pump would not pass an annual test. “The chief at the time felt it needed to be taken out of service, which was correct, but we were not able to replace that truck.”

The fire department’s second-out apparatus is Engine 142, which is approaching 31-years-old when most departments are on a 20-year replacement cycle, Patrick wrote. “This truck needs an engine rebuild, the front discharge is rusted out and leaks water, the AC does not work so firefighters can’t use it for rehab and the wiring is a mess.”

The truck does not meet the most recent National Fire Protection Association standards. It doesn’t have zoned lighting over the entire truck, does not have proper reflective material on all sides and reflective chevrons on the rear. “Our current response to structure fires, which we were graded on by ISO, shows us responding with two fire engines and one ladder to all structure-related fires,” Patrick wrote. “Based on this response, we technically have not had a backup apparatus since the departure of the 1981 Pierce.”

When the department has two apparatus out of service for repairs, it must borrow an engine from another department, something Patrick said has happened many times throughout the last five years. “Another thing to keep in mind is that the current turnaround time to have a fire engine built is roughly 14 months from the time you sign the contract.”

That means if the city buys one today, it would be next year this time before the department would receive delivery. “In some cases, depending on the financing we use, the first payment could possibly be delayed another year which would put our payment off for two years.”

The cost of a new fire engine is between $650,000 to $750,000. The price includes the equipment needed for the engine to be completely outfitted.

“It was good for its time,” firefighter Jeff Brown told council members as he showed Engine 142.

Patrick said Engine 142 would “not be done away with.”

If council does approve a new engine 142 would be placed on reserve status.

The second item is a pickup to replace a 1997 Yukon assigned to the deputy chief.

Patrick is requesting an F-250 which will be used to pull the new fire safety house. “The 1997 Yukon which we are asking to replace is 24-years-old and was donated to us in the early 2000s by Dominion Power.”

The generator needs to be replaced, Patrick said. It is a 20kw device which does not generate enough power to run the entire building. “When power is out and the station is being run off generator power, we do not have enough power to operate the AC units and many other items such as our breathing air compressor.

Station 1 on Roanoke Avenue is 24-years-old and has begun to show its age, Patrick said. “The AC units are starting to go bad and over the past three years we have had to replace a unit without the funds being included in our budget.”

Said Patrick: “As you know with our budget already down to the bone, we have had to do without in other areas to be able to make it through the year.”

He said there are five HVAC units which need replacing. “Since the current units are not as efficient as the newer units, we may be able to find a program to replace all units through a rebate program. If we were able to do all five I feel we could most likely find a rebate program through some greener energy deals, possibly through Dominion.”

The drive, like the building, is 24-years-old, Patrick said, and with the constant weight of apparatus going in and out to calls, the driveway has started to bulk, crack and come apart. “The asphalt needs to be ground up and either replaced with new asphalt or concrete.”

The fire department is currently in a grant with the Halifax County Firefighters Association which if awarded the department would receive funds for Viper radios. “It is estimated we would be able to purchase about half of the radios that are needed for our department,” Patrick said. “If awarded this grant we would still need to purchase 15 additional portable radios and five mobile radios at a total price of $78,650.”

The next round of budget sessions are scheduled for Tuesday, the first one at 8:30 a.m. in the first floor conference room of city hall and the second at 1 p.m. at T.J. Davis Recreation Center.