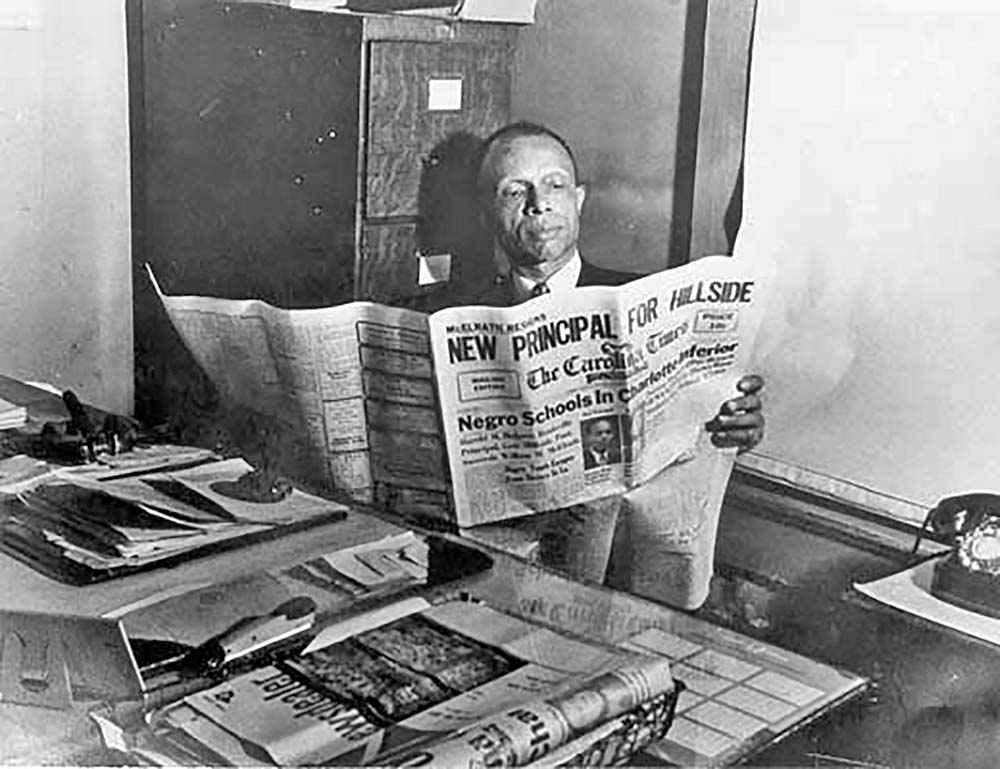 North Carolina will help the town of Enfield recognize one of its native sons in the summer.

The late Louis Austin, who served from 1927-1971 as editor-in-chief and publisher of the Durham-based publication, Carolina Times, will be honored in a historical marker ceremony likely in May or June, according to Ansley Wegner, the administrator of the state’s Highway Historical Marker Program.

“The marker will be ordered around March and should be delivered to DOT (Department of Transportation) in June,” she said in an email.

Rodney D. Pierce, an eighth-grade social studies and civics and economics teacher at William R. Davie Middle STEM Academy, applied for the marker in November and was notified this week that the application had been approved.

Pierce learned about Austin while leading a group of the Halifax County Schools District’s secondary history teachers in creating a curriculum centered around the Tillery History House. During a professional development session, he met Will Goldsmith, a doctoral candidate at Duke University and former Teach for America instructor at Northwest Halifax, who had Austin’s biography, Louis Austin and the Carolina Times, sitting on a table spread out with other books.

“During the course of personal research I’ve done on black history in the county, particularly around what we call the long Black freedom struggle or the long civil rights movement, the Carolina Times had been an invaluable resource,” said Pierce. “So it immediately caught my eye. While discussing the book with Will, he told me Mr. Austin was from Enfield. I was blown away.

“When I started researching Austin, I learned that in 2017 the city of Durham, where he really made his mark with the newspaper, dedicated a history grove to him that’s located in Solite Park. I found out last week that he has his own exhibit at the Museum of Durham History. If I didn’t know who Louis Austin was, I was sure my students didn’t, and there’s nothing here in the county recognizing him and his achievements. I wanted to change that.”

Born in 1898, Austin came of age at the nadir of the Jim Crow era and became a transformative leader of the long black freedom struggle in the state. His father William, who ran a farm and barbershop in Enfield where he cut the hair of white customers, taught him at an early age to stand up for his rights. Austin finished high school at the historic Joseph K. Brick School just outside of the town and completed college at N.C. Central University (then the National Training School).

He purchased the then Standard Advertiser in 1927 and changed the name to The Carolina Times. From that year to Austin’s death in 1971, he operated what became the preeminent Black newspaper in the state, using the power of the press to voice the anger of black Carolinians, and to turn that anger into action.

His career as a journalist and activist during the Great Depression, World War II, and the postwar civil rights movement helped pioneer radical tactics including anti-segregation lawsuits, boycotts of segregated movie theaters and white-owned stores that refused to hire black workers, and African-American voting rights campaigns based on political participation in the Democratic Party.

While lobbying for integration of public schools, he also used his platform to advocate for equal pay for black teachers and equal funding of black schools, denounced police brutality, demanded equal employment opportunity for African-Americans and legal action as a recourse for equity in education.

In May, Pierce contacted Dr. Jerry Gershenhorn, the author of Austin’s biography and a history professor at Austin’s alma mater for assistance.

Gershenhorn put him in touch with Austin’s grandson, Kenneth Edmonds, who still publishes the paper today, to get the blessing of the family to pursue the marker.

The Carolina Times is the only black-owned and operated newspaper in Durham.

Edmonds wrote Pierce a letter supporting the effort, and he used it to secure resolutions and letters of support from the Halifax County Commissioners, Enfield Town Commissioners and Halifax County state legislators Milton “Toby” Fitch (Senate) and Michael Wray (House of Representatives) to accompany the application.

“(Pierce) provided excellent resources and justification for both his historical significance and for placing the marker in Enfield, rather than Durham,” said Wegner. “The committee of 10 history professors, eight of whom were present, voted unanimously to approve the marker. Austin was recognized for his importance as a journalist and advocate of social justice and civil rights. (His) marker will be the 48th North Carolina Highway Historical Marker in Halifax County.”