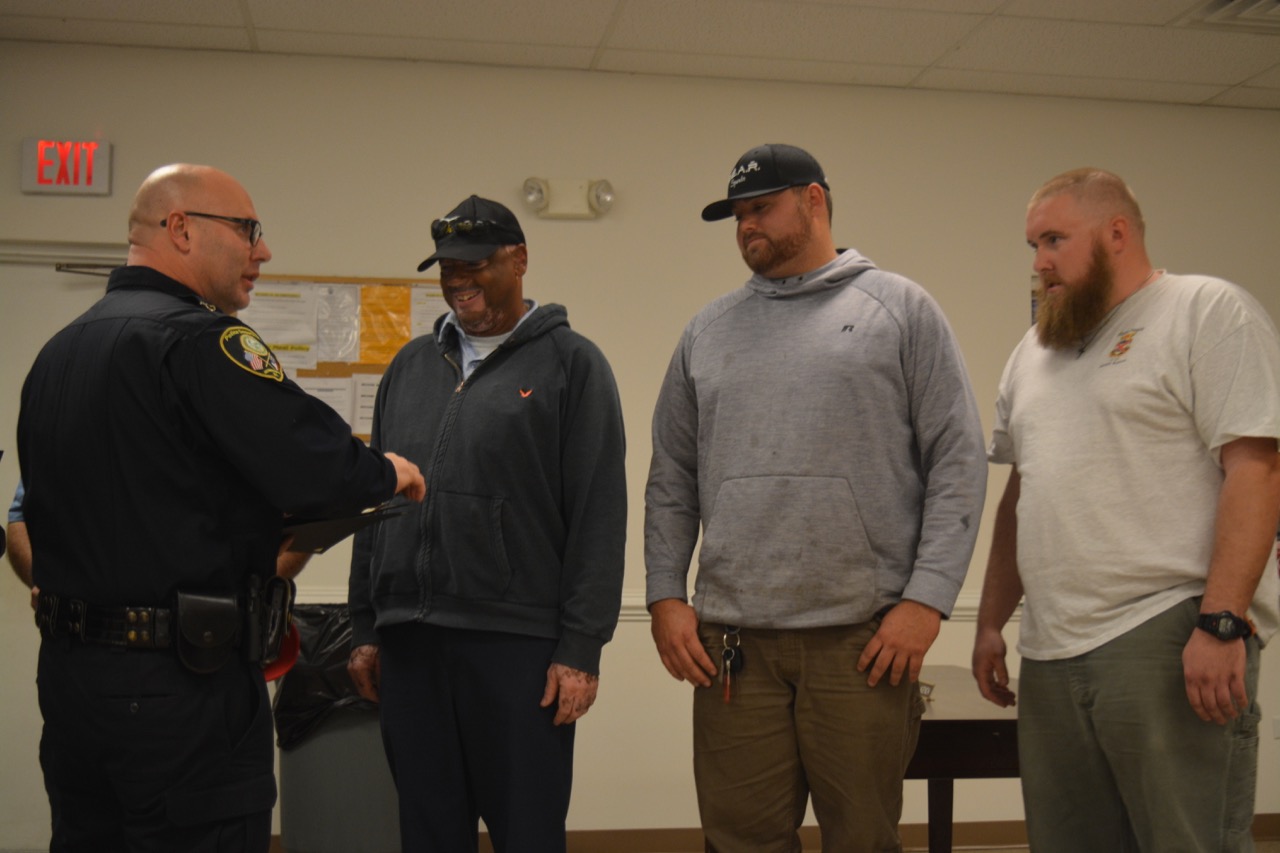 A breaking and entering case earlier this month led to the return of a loved one’s remains and honors at Tuesday’s city council meeting for police and public works employees who diligently worked to find them.

“It all started with this wonderful man,” said Pamela Gaston of Roanoke Rapids Police Department Investigator Jeff Davis, who worked the December 3 with other officers and city employees. “I want to thank everyone from the bottom of my heart. You don’t know how much I appreciate you in a time when I was falling apart. You put peace in my heart.”

The events which led to the return of the remains occurred when Davis responded to a vehicle breaking and entering on Park Avenue and learned the cremated remains of a family member were stolen, police Chief Chuck Hasty told council.

Davis called Public Works Director Larry Chalker who in turn informed his employees what they should be looking for.

Captain Bobby Martin said in letter recommending commendations for the officers and public works staff, “It was not long before Larry Chalker contacted me and advised me that the bag the remains were in was located not far from the victim’s home.”

Martin said in the narrative he and Investigator E. Johnson met with Chalker, Doug Love and Mike Manning. “We split up and started to check the neighborhood for any further evidence of the breaking and enterings.”

Through this check, Martin said in the narrative, Johnson located a Craftsman drill set leaning against a tree.

A search continued in the area, including a search of trash cans. Love, the city’s assistant public works director, “advised me he believed he located the remains in a trash can. I went to Doug’s location and positively identified the remains.”

Martin said when he returned them, the victim “was overwhelmed with emotions. She thanked me for finding the remains. I explained to her that (Investigator) Davis’s quick thinking really helped recover those remains along with the quick work of Larry Chalker and his team.”

Said Martin in the narrative emailed to Hasty: “I would like to recommend (Investigator) Davis, Larry Chalker, Doug Love and Mike Manning and the crew working that area that located the bag the remains were in because they were the ones that brought this family their loved one’s remains back.”

Wrote Martin: “(Investigator) Davis taking the time to help this family was above and beyond the call of duty. Larry Chalker, Doug Love and Mike Manning were right there with us as we checked each home and trash can in that area and that speaks volumes about what type leader Larry Chalker is.

“This team effort deserves to be recognized and should be known by the citizens of Roanoke Rapids that they have city employees willing to go that extra mile for them. Taking the initiative to treat this like it was one of their family members was a very kind and caring way to show what type of employees the city of Roanoke Rapids has.”

Along with the ones mentioned in the narrative, Hasty presented commendations to Kaid Moody, Cody Hurdle, Linwood Bowser, Alvin Rivers, Edward Brown and Antonio Richardson.

Said Mayor Emery Doughtie: “They are really good public ambassadors for the city.”