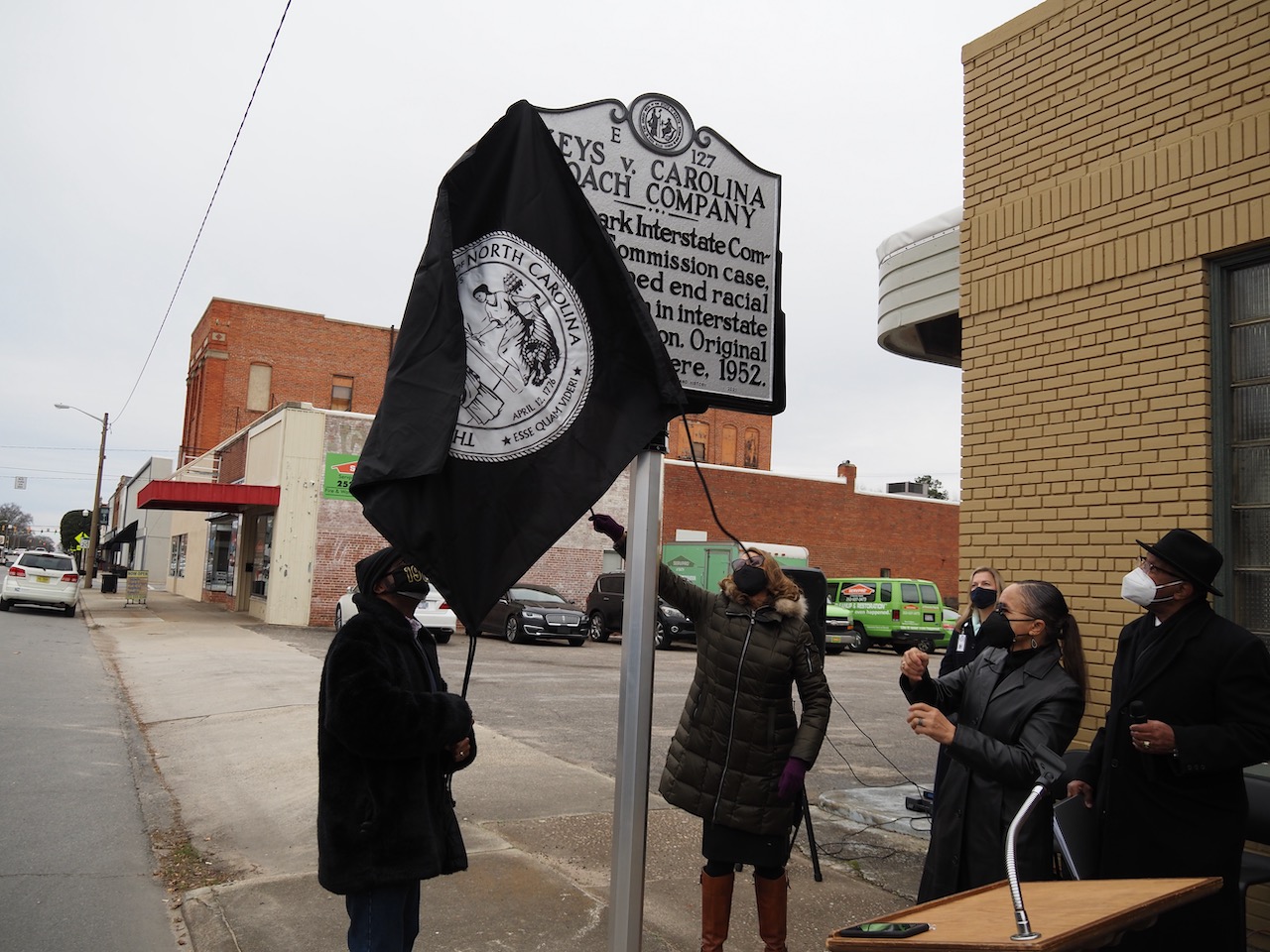 Marker honoring Keys unveiled at site where she was arrested

Officials and organizers this afternoon stood at the former bus station where Sarah Keys Evans was arrested in 1952 for refusing to give up her seat to a White Marine to unveil a state historic marker designating her actions which led to a landmark civil rights case.

In her invocation, Carrie Tuning, the first African American legal administrator in the Army Judge Advocate Corps, said, “We thank you father God that you sent her at an appointed time to Roanoke Rapids to show her boldness, to show her bravery, to show that she was indeed and still is a woman of God that stands boldly before your throne.”

Roanoke Rapids City Councilwoman Sandra Bryant said, “As I reflect on the life of Sarah Keys Evans, the 22-year-old Black woman on August 1, 1952, refused to give up her seat on a state-to-state charter bus. By refusing to give up her seat and move to the back of the bus so a White Marine could take her seat, the Sarah Keys versus Carolina Coach Company landmark court case began.”

Bryant told the story of Keys’s arrest and how she spent “an unpleasant night here in the city of Roanoke Rapids in their jail.”

Ansley Herring Wegner, administrator of the North Carolina Highway Historical Marker Program, said the program was established in 1935 and is operated jointly with the department of transportation. There are currently 1,619 historical markers around the state — one in every county.

Wegner noted that the marker is named Keys v. Carolina Coach Company and doesn’t mention Keys Evans by name because she is still alive. “One of our major rules for our program is that a person has to have been dead for 25 years before they can be named on a marker. We didn’t want to not be able to tell the story now.”

The markers throughout the state, she said, are like history tweets or history haikus. “The markers designate events, institutions and people in the life of the state both good and bad, tragic and heroic and sometimes downright shameful.”

Said Wegner: “Today we pause to remember Sarah Keys Evans and the Keys versus Carolina Coach Company case. From our shared past, from a shared place, here we tell this important story to all who pass by and perhaps one small but true important act of community.”

Tuning said that Keys Evans being a member of the Women's Army Air Corps was an honorable sacrifice. “She showed her desire to serve her country even though back in 1952 she was not even considered to be free herself. Yet she was desiring to be there and support the United States of America where some people did not even consider her as completely human.”

Tuning described Keys Evans as a warrior for serving and a warrior for standing for what she believed in. “She had on a military uniform. She raised her hand to say that she would serve and defend foreign and domestic and she was there.”

Yet, Tuning said, Keys Evans was asked to give up her seat for someone who didn’t share her gender, her race or ethnicity but “yet she stood firm in what she believed. I am a firm believer that we cannot erase history but we must all learn to live together. That’s what she was trying to do back on August 1 of 1952 when she was told to give up her seat.”

Keys Evans did not use the episode to make her a bitter individual, Tuning said. “She continued to serve her country even though some within the country did not want to accept her as she is. I think she deserves our salute, she deserves our honor today but not just for today but for all servicemen and servicewomen, for all of those individuals who fight, who live so that you and I can have freedom.

“She had to give up something. She gave up being with family, things that a lot of you all may never understand — moving from one place to another not knowing in that town, yet having to try to survive. It’s not easy.”

Reverend C.E. McCollum, chair of the Sarah Keys Evans Plaza Committee, which helped to bring a public art project to Dr. Martin Luther King Jr. Park said, “Today is history in the making and I, like you, am honored to stand in this sacred space and present a moment in time.”

McCollum said, “If anyone’s story needs to be made known to the world, it is that of Sarah Keys Evans, especially in the very community where her story has great significance. Every citizen in the Roanoke Valley and surrounding communities and beyond, from the least to the greatest, should know the history of Sarah Keys Evans.”

Had she not taken a stand, McCollum said, “We wouldn’t be having this dedication today. It only takes one person to change the world — or at least a vital part of it.”

A labor of love

Rodney Pierce, who led the charge to have the marker placed, said the events which led to today’s unveiling were nine years in the making. “This is just a very momentous occasion. I hope that everybody who is here realizes how significant this is. The fact that she is still here with us means everything … I have done my best to keep her story alive. I hope you take from this what I took from it. It’s been a labor of love.”

Julie Graves, Keys Evans's niece, said, “I have the privilege of representing my aunt and the Keys family today. Ms. Evans would have loved to be here. She wanted me to let everyone know she is here in spirit and on her behalf I would like to thank Mr. Rodney Pierce  who has worked diligently to make this historical marker a reality.”

Graves also thanked the city and those on the committee for making the marker a reality. “To the city of Roanoke Rapids, thank you for sharing Ms. Sarah Keys Evans's story. She, along with the entire Keys family past and present appreciates all of your love and support.”