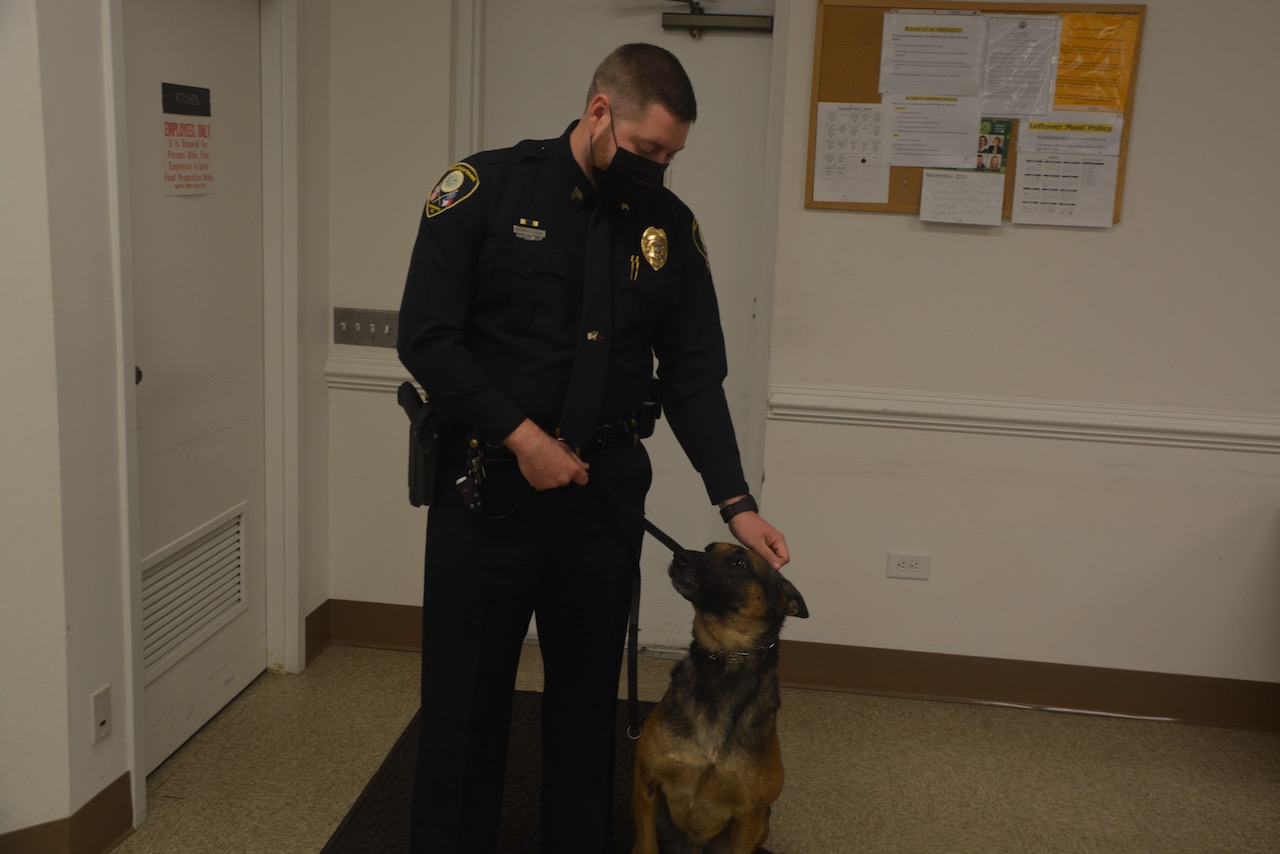 The Roanoke Rapids Police Department took center stage during the special recognition portion of the city council’s meeting Tuesday night — first with the retirement of one of its canine officers and then by honoring a longtime volunteer.

Chief Bobby Martin handed the leash of Dubai over to his handler, Sergeant Matt Hunsucker.

Dubai had served the city since 2019 before an injury hampered the dog’s work.

“K-9 Dubai has faithfully served the city since April 2019 and has recently been retired,” read the preface to an ordinance which allowed Hunsucker to keep the canine.

Dubai completed 240 hours of certification work and a 24-hour hard surface tracking seminar. He began working the road full-time in May of 2019.

Following recognition of Dubai and Hunsucker, Martin and Administrative Assistant Tina May honored the 22 years of volunteering by Josephine “Jo” Wrenn.

“She began her volunteer work with the Roanoke Police Department records division and then became a member of the Citizens on Patrol created by Chief Greg Lawson,” Martin said. “Mrs. Wrenn’s faithful dedication to this police department has been a benefit to us all.”

Martin said the plaque he and May presented to Wrenn did not represent a retirement recognition, “but an appreciation of her being a part of our law enforcement family.”

Wrenn has provided service to the citizens and assisted the records division during peak times. “She has provided hours of service with the Citizens on Patrol, planning events, social gatherings, and community policing programs that connected citizens to law enforcement in a positive manner. Mrs. Wrenn is a vital part of our agency …”

Wrenn is a lifelong resident of Roanoke Rapids and she and her late husband Mason raised four children.

She worked many years with the former Charter Communications and after retiring she would spend spring and summers in Roanoke Rapids, “and find happiness in warm, sunny Florida in the winter.”

Martin said Wrenn is always hosting meals for her family and is readily available to her grandchildren and great-grandchildren.

An active member of Calvary Baptist Church, the police chief said, “I would say Mrs. Wrenn doesn’t have much free time, however, she has included the Roanoke Rapids Police Department into her schedule for over two decades.”