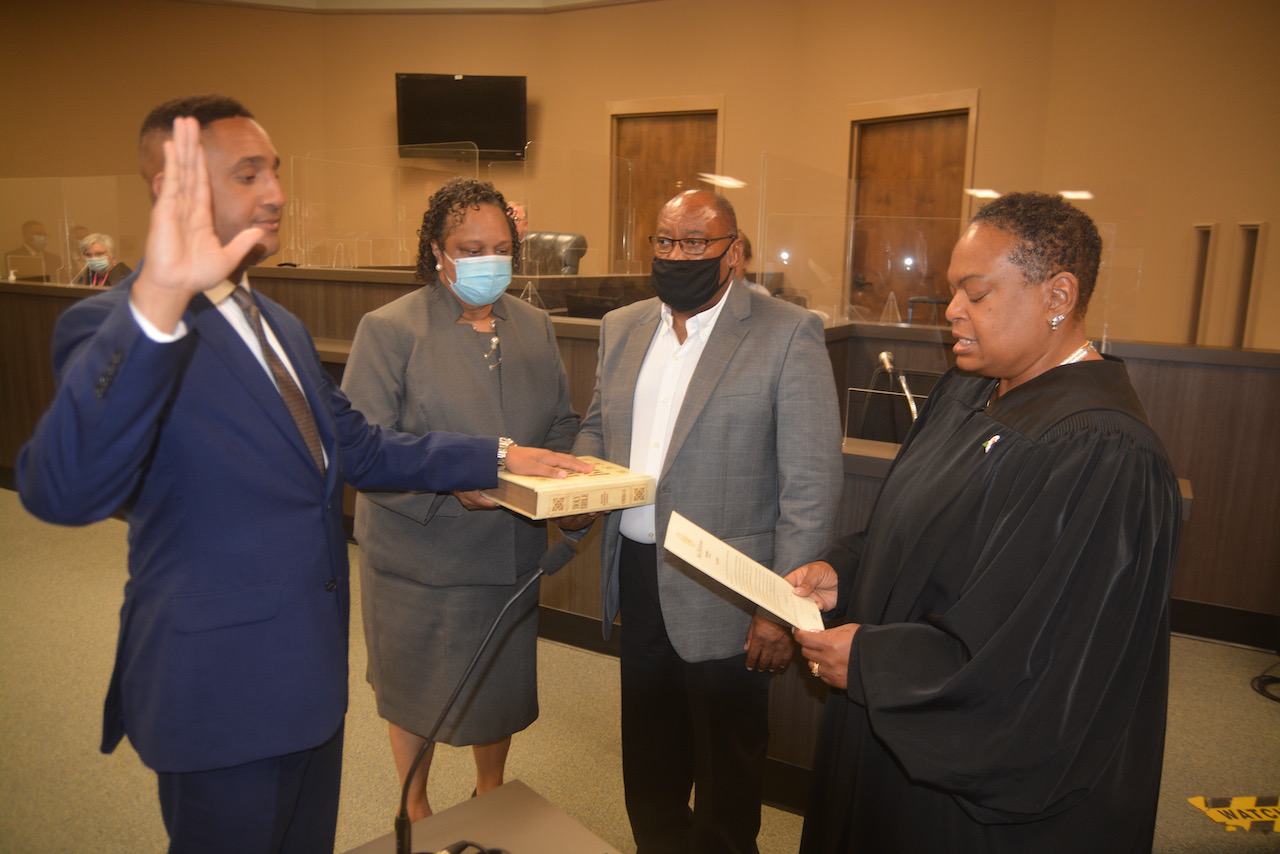 Graves sworn in as 6A superior court judge

With help from his parents Lonnie and Robin, Norlan Graves donned his judicial robe after being sworn in by retired District 6A Superior Court Judge Alma Hinton.

Graves was appointed by Governor Roy Cooper earlier this month to the seat left vacant by Hinton’s retirement.

In an investiture ceremony held in the superior courtroom of the Halifax County Courthouse Complex this morning, Graves said, “I’m beyond grateful for this opportunity. I just want to thank God first for giving me this wonderful opportunity.”

Graves expressed appreciation to those who filled the courtroom to witness him taking the oath and putting on his judge’s robe, saying he weighed how big he wanted the event to be. “I truly believe the court system should not have exclusive events for a select few. I think this courtroom, this courthouse as well as the positions that we hold … it all belongs to you.”

Graves said, “I’m just elated. I don’t have words to express how I feel right now. Judge Hinton has been with me since I got here to Halifax County.”

He said it was former Assistant District Attorney Chance Lynch who asked him if he needed a job when he was practicing law. “At the time I was practicing law out of my Honda. I wasn’t even a Lincoln lawyer — I was a Honda lawyer.”

He took the oath as a DA in the same courtroom he was administered the judicial oath with Hinton on the bench.

It was Hinton who told Graves the path to becoming a superior court judge begins with staying true to yourself, remaining humble and keeping God first. “I promise each and everyone of you that I will continue to do those three things.”

Said Graves: “At a time our nation seems to be more divided than it has been, I will say despite what the people on TV tell you, we have a lot more in common than anything else. I think all of us deserve fair treatment when it comes to our courts. I promise to live up to my oath I just took. The Bible that I swore in on was my grandmother’s. I promise to stay true to those words because that Bible actually means something to me.”

After his comments, Graves presented a gift from the North Carolina Judicial Branch to Hinton — a rocking chair — and also read a letter from Chief Justice Paul Newby of the North Carolina Supreme Court, acknowledging Hinton’s 30 years of service to the judicial system.

“The importance of having an experienced and dedicated employee such as you cannot be overemphasized,” the letter said. “Our system of administering fair and equal justice hinges to a great emphasis on those qualities. We are indeed pleased to have the benefit of your service. We extend our congratulations to you on having reached this milestone and look forward to your continued service in our mutual efforts to ensure that our court system continues to be one of which we can be proud.”

“I’ve known Judge Graves for many years,” Chichester said. “He’s a man of great integrity, strength and will do a fantastic job — not just for our district but for the state of North Carolina and everyone who comes to court.”

“The first thing I said to the governor’s office when I was asked who should replace me was, of course, Norlan Graves,” Hinton said. “When I began to tell them about Norlan the first thing I said was that Norlan was someone who receives well and offers wise counsel. That is a quality that is absolutely necessary in a great jurist.”

Hinton said, “I stand today and have always stood on the strong shoulders of many who have come before me and made a way for me. Many of them have gone on and are no longer with us. Some of them are portraits hanging in the courtroom and some of them are in this courtroom.”

The retired judge said she prays daily that “ … the Lord strengthens my shoulders so that my shoulders can be as strong as the ones on which I stand … I offer my strong shoulders to Norlan Graves that they will be strong enough for him to lean on and lift him.”