“It’s a very humbling experience to take home the trophy and the medal, but that's not all I am taking home with me,” Morris said. “I'm taking home so many relationships that will last a lifetime. Anyone ages 12-18 interested in competing in the IJAC please do so, it is such an awesome experience.”

He will further his education as a dually enrolled student at North Carolina State University and Nash Community College, majoring in agricultural business management. 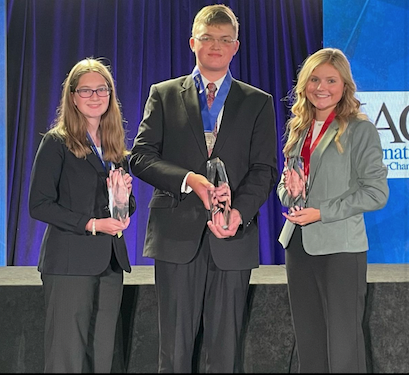 Morris pictured in the center. In the lead photo he is pictured with 2019 champion Tyce Freije.

Morris has been involved in the auction industry for seven years. He also has plans to pursue a political career as a United States senator for North Carolina since serving as a senate page under North Carolina State Senator Tom McInnis in the North Carolina General Assembly in May of 2018 where he was awarded Senate Page of the Week by his fellow pages.

Morris also has ambitions to have a successful auction career and encourages others to hold to his life verse Romans 8:28.

One young auctioneer wins the title of IJAC Champion annually.

The winner of this competition is known as one of the auction industry’s top up-and-comers. Morris joined peers between 12 and 18 years old to vie for the IJAC title.

IJAC competitors are judged on their presentation, chant, voice timbre, body language and other performance elements of effective auctioneering.

Finalists also answer interview questions and compete in front of live attendees, with tens of thousands of viewers on IAC Live! via Facebook and YouTube.

The IJAC Champion is awarded a trophy, champion medallion, complimentary registration for the 2022 NAA Conference & Show, and a complimentary registration into the International Auctioneer Championship, once the winner meets the minimum age requirement for the IAC. The IJAC Champion also goes on to represent the NAA as a brand ambassador to young people interested in the auction industry.